10 things to do in Sucre, Bolivia’s White City

For many Bolivians, Sucre is the rightful capital of the country. The city hosted Bolivia’s declaration of independence in 1825, and for many years after was the seat of national government. Today, Sucre is a UNESCO World Heritage Site and a fascinating window into South America’s past, with many of its old colonial buildings preserved immaculately. After spending two activity-filled days exploring the city’s pretty streets, we’ve compiled the best things to do in Sucre, the White City of Bolivia.

Things to do in Sucre, Bolivia

Plaza 25 de Mayo is at the heart of Sucre’s historic centre and the hub of activity in the city. Its perimeter is lined with some of the pristine whitewashed colonial buildings that inspired Sucre’s ‘White City’ moniker, such as the State Government Palace.

A statue of Antonio José de Sucre, Bolivia’s first president, stands at the centre of the square, surrounded by beautifully cultivated gardens and converging walkways. This is a great spot to take a seat at one of the plaza’s benches and watch city life unfold.

You’ll often also find pop-up market stalls and local craft vendors plying their trade around the edge of the plaza.

2.  See the spectacle of Sucre Cathedral

The stand-out feature of Plaza 25 de Mayo is Sucre Metropolitan Cathedral, towering proudly on the south corner of the square. This grand old building is the nerve centre of Sucre’s deeply rooted Catholic traditions.

The cathedral, which was completed more than three centuries ago, fuses renaissance and baroque architectural qualities. Many of its original features are impressively preserved and maintained.

The majestic cast-iron gate and carved wooden doors are a taster for the incredible detail you will find throughout the cathedral’s interior. It’s well worth taking a look inside to explore the intricate carvings, oil paintings and stained-glass windows.

3.  Explore the White City at night

Sucre’s white cityscape is impressive to behold in full daylight, but as night descends the old buildings take on an extra-magical quality.

Many of the most significant colonial buildings are decorated with gold-coloured features that complement their whitewashed facades. When illuminated at night, this is accentuated magnificently.

Sucre Metropolitan Cathedral shimmers golden-white as dusk falls. If you walk around the narrow streets surrounding Plaza 25 de Mayo from here, you will see the city in – excuse the pun – a very new light.

4.  Shop for food at Mercado Central

While Sucre has a great choice of restaurants that offer traditional local dishes, one of the best ways to experience the local food culture is to explore the local markets.

Mercado Central, just a couple of blocks to the north of Plaza 25 de Mayo, is the city’s principal marketplace. Be prepared to get your haggling game on to buy fruit, vegetables, meats, bread, herbs, spices and other foodstuffs from friendly local vendors.

If you don’t have a place to cook your own food at your accommodation in Sucre, then you can head upstairs in Central Mercado and try local dishes at the busy lunchtime eateries. These are a fantastic way to discover Sucre’s cuisine at very cheap prices.

We tried mondogo – a local special of crispy fried pork, chilli sauce, potatoes and corn – and paid just 30 bolivianos for both of us, including a drink each.

Parque Simón Bolívar (not to be confused with the giant park of the same name in Bogotá, Colombia) is a large park and gardens located some five blocks to the north-west of Plaza 25 de Mayo. It’s a peaceful place to hang out, take a relaxing stroll or go for a morning jog.

The most recognisable feature of the park is a red iron structure designed by none other than France’s celebrated Gustav Eiffel. The construction resembles his famous Parisienne landmark so closely that it has become known as Sucre’s Eiffel Tower. It stands in the middle of the park surrounded by ornate crafted ponds.

At the far north end of the park is Fuente del Bicentenario, a large water fountain that was built over two centuries ago. A colourful light show is staged at the fountain every Friday, Saturday and Sunday between 7pm and 9pm.

6.  Eat some of Bolivia’s best salteñas

One of the trademarks of Bolivia’s food scene is the salteña, a savoury baked pastry snack. It is a Bolivian take on the empanada, which is popular in Spain and across most of South America.

Salteñas differ from empanadas in that their usually meat-based fillings come in a spicy sauce with olives and potatoes. Bolivians tend to eat them as a mid-morning snack.

El Patio Salteñaria in Sucre is reputed to serve some of the best salteñas in Bolivia. We tried them, and we weren’t disappointed! It’s a very popular spot though, so get in there early – any later than 11am and you might miss out.

If you want to get to know the local cuisine more, you can take a traditional Bolivian cooking class in Sucre. You’ll learn to make a three-course meal as well as a local speciality cocktail.

7.  See the city panorama from Recoleta

At the crest of a hill to the south-east of Sucre’s historic centre you will find Recoleta, which offers the best city viewpoint.

Like many colonial cities of South America, Sucre’s streets are arranged into a grid pattern. From Plaza 25 de Mayo, you can reach Recoleta by walking along any of the roads that point south-east. Within 20 minutes (and after a short but steep hill walk at the end), you will reach the spot.

Recoleta itself is a nice area to look around, with highlights being the cobblestoned, arch-lined courtyard of Plaza de Anzurez, and the nearby craft markets. The real beauty, though, is the panoramic view across Sucre’s white-walled, red-roofed city streetscape, and the mountainous horizon beyond.

8.  Hang out at Café Time & Coffee in Recoleta

Situated perfectly just beneath La Recoleta’s main viewpoint is Café Time and Coffee, a cosy café with a stunning outdoor terrace space. It replaces Café Gourmet Mirador, which was a popular spot on the site previously, but closed down.

This is the perfect spot to rest for a while and enjoy that view over a delicious Bolivian coffee, perhaps with some homemade cake. The café also serves excellent food. If you time your visit just right, you can have a meal and a glass of wine while watching the sun set over the old city. Perfect.

There is another Café Time & Coffee by Parque Simón Bolívar, but we definitely recommend coming up to this one for the view! The café also runs events and experiences, such as coffee cycling tours. Check out its Facebook page to see what’s coming up.

While the historical section of Sucre around Plaza 25 de Mayo is typified by clean, white walls, if you venture a little further out, the city landscape begins to change. In the neighbourhoods between the old centre and the bus station, a less affluent area of the city, we came across some beautiful examples of street art.

The Italian street artist Blu is known to have painted a mural in the suburbs of Sucre. We couldn’t find that particular one, but we did encounter a beautiful street mural of a child in rags huddled into a ball. With an active community of artists in the city, there are many more examples to be found around the outer streets.

Drawn by the relaxed vibe and safe reputation, many people choose Sucre as a base for learning Spanish. The city is, in fact, one of the most popular centres in South America for doing so.

There are classes available all over the city, with prices as cheap as 35 bolivianos an hour (about 5 US dollars). When you combine this with the beautiful surroundings and chilled pace of life, it’s hardly surprising that people are choosing Sucre for language-learning slow travel.

If you’re passing through as a backpacker, taking a Spanish lesson or two is also a great way to meet new people.

Where to stay in Sucre

Sucre has a range of different accommodation options for travellers of all budget types. We stayed in a hostel that has since closed down. After researching more options, the following are our top accommodation picks in Sucre for a range of budgets and travel styles:

How to get to Sucre

Before we arrived in Bolivia we heard a few horror stories about the quality of bus transport in the country. We are happy to say that wasn’t our experience at all – we had nothing but good journeys!

The city is centrally located in Bolivia and well connected by road to other major cities around the country. Bus routes operate several times a day to La Paz, Potosí, Uyuni, Santa Cruz, Oruro, Cochabamba and Tarija. You can compare services and find the cheapest prices on Busbud.

Sucre does have an international airport that receives flights from Madrid, Buenos Aires, Salta and São Paulo, all operated by national airline Boliviana de Aviación. If you were ever in doubt as to how Sucre’s inhabitants feel about which city should have capital status, look out for the ‘welcome to the capital of Bolivia’ sign as you leave the airport!

Things to do in Sucre: map of attractions

This map shows the sites of interest I have detailed in this article:

If you’re planning a trip to Bolivia, you might find our other articles useful:

Have you been to Sucre? Let us know about your experiences in the comments below. 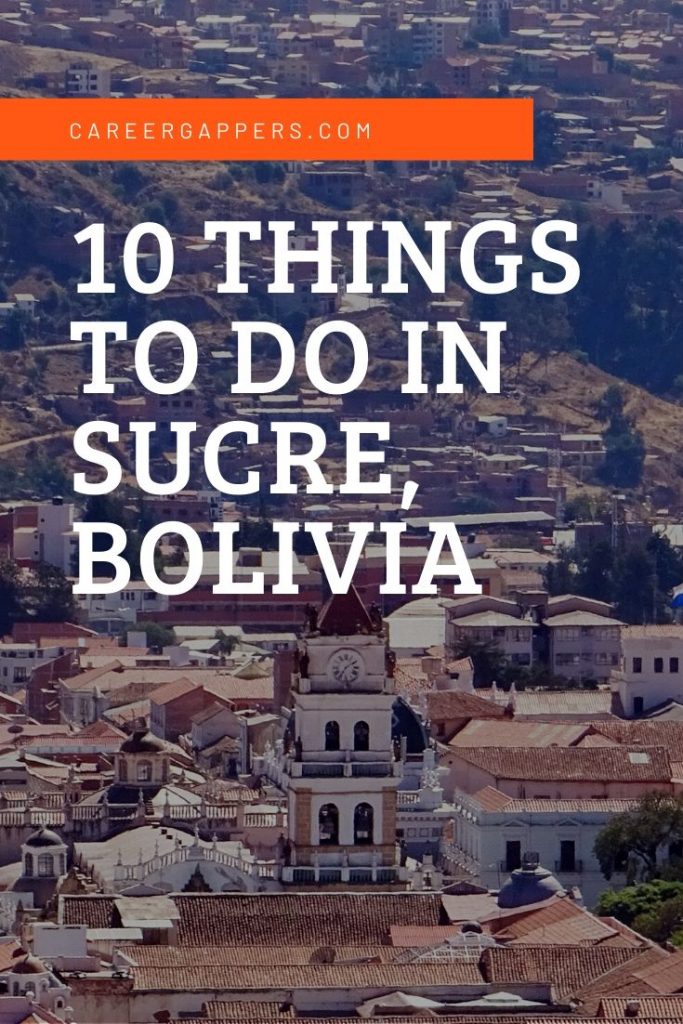