Death Road, Bolivia: once a real-life horror show, today a major tourist attraction. Yungas Road gained its infamous nickname in 1995 when the Inter-American Development Bank dubbed it “the world’s most dangerous road”.

It was not a baseless accusation. Since the road opened in the 1930s, it has reportedly claimed many thousands of lives. The guides on our mountain biking tour suggested as many as 80,000; other sources suggest 300 per year. Whatever the exact truth, it didn’t help with my nerves as I tested out the brakes on my bike.

The road links La Paz, Bolivia’s high-altitude capital city, with Corioco, involving an altitude drop of over 2,000 metres. It winds down over 60 kilometres, almost all downhill, through breathtaking scenes of mountainous rainforest. For the most part it’s a loose gravel track, barely wide enough for two passing cars, and yawning cliff edges drop away at every corner. That’s a stupidly steep, long, loose-gravel hill. Why were we mountain biking down it again?

From death trap to tourist trap

In the 1990s, mountain biking tours began operating down Death Road, despite the pretty crap safety record. In 2006, however, sweeping new safety measures were introduced (phew), and the opening of a new paved road a year later has seen the incident toll fall dramatically.

The safety record on Yungas Road today is excellent, and it is particularly rare for a cyclist to get hurt. When things do happen, it’s almost always due to carelessness or recklessness. Our tour guides told us about the tragic example of a young Israeli woman who plummeted to her death when trying to film her boyfriend biking around a corner.

Despite the massive safety improvements, we were still hugely apprehensive about doing it. A year before we visited Bolivia, my friend Hannah had a very bad accident on a Death Road biking tour. She came off her bike at speed, was knocked out cold, lost teeth and didn’t come around for a couple of days. She remained in hospital for surgery afterwards (she was one of the sensible, unlucky ones and she still doesn’t know what actually happened).

However, after hearing nothing but great things from other travellers about the experience as we made our way from Peru into Bolivia, we decided to give it a go.

For obvious reasons, we were extremely careful when selecting a tour company to go with. We spent hours doing our research, reading reviews and asking questions about the safety measures. We decided upon Barracuda Biking. They may have been a little more expensive than others, but that was the last of our considerations. We were far more interested in their safety record and how often they tested the bikes. We were convinced that these guys were the best, and they didn’t let us down.

An early fall: my confidence takes a hit

The day begins and we’re taken up to a high point near the entry to Yungas Road. We get kitted out and get ready to test the bikes. The camaraderie is good, and our tour guides share round a traditional local drink. We each pour a little on the ground as an offering to Pachamama (a goddess worshipped by indigenous people of the Andes) for good luck.

We set off on a practice run a few kilometres downhill on the new road, and I start off well. I have a good pace, or at least I’m not at the back. There’s a bunch of guys from Brazil in the group who are loud and fast; they go tearing off into the distance.

I come up to meet our group at the first photo point, where everyone has pulled over to the side of the road on a patch of gravel. That’s where I make my first mistake. I pull my brakes too hard and end up eating rocks. The guide quickly comes over to see if I’m ok, imitating an ambulance sound as he does, which was actually quite fun. Don’t worry; at this point I have nothing but a bruised ego and scratched Fitbit.

We start off again but I’ve lost my nerve. I start to think about how easy it must have been for Hannah to come off. And seeing as I’ve done it once, on the practice road, what am I going to be like when we get onto Death Road? Yikes.

I’m at the back going slowly, but the guide is with me all the way. I start to feel stupid about how scared I am and I have a little cry before the next break stop.

We finish the practice road and I’m feeling a bit crappy. I tell Alex that I don’t think I can do it. He reassures me that I can take it as slowly as I need to. I grab a coffee (which comes in a sandwich bag with a straw) and settle onto the bus, trying to calm my nerves. We drive to the proper start point.

The upper parts of Death Road are enshrouded in cloud because we’re so high. We’ve been told there will be no cars on it because the road has been closed due to a landslide (like that’s the only reason they should need to close it).

I start off a little more confident. I’m going a bit faster and the guides stop us for regular breaks to gather together and take photos. It’s not easy riding off-road and I’ve never really done it before, but without the constant barrage of fast-moving traffic it feels a little easier.

But then I go wrong for the second time. I’m coming up to a sharp corner. I must have lost my nerve a bit and pulled on the brakes too hard. I end up flying over the handlebars and the bike lands on top of me. Alex is behind and saw the whole thing, so he stops to pull me up and check if I’m ok. Luckily I didn’t go over the edge (I was nowhere near it) and I have no broken bones, just a few bruises that will ripen out to a great colour over the next few days.

The guide was behind me too, and saw what happened. He says that I’m sitting on the bike too high and insists to swap his bike with mine. After that I take it slowly. I’ve gotten to the point where I don’t care about being too slow for anyone else and I make it down Death Road in one piece, getting a little bit faster as the gradient starts to even out at the end.

At the bottom a buffet lunch, swimming pool and plenty of bottles of beer await us. We discharge our nerves and adrenaline and head back to La Paz. All in all it was a great experience, and having done it once I would love to try it again to see if I’d be any better.

There are so many tours, like this and the Colca Canyon in Peru, that are often made out to be easy. The vibe created by backpacker community chat is that anyone can just go and do it. For some people it’s easy, maybe because they’ve practiced with mountain bikes or they have experience of hiking up canyons. But before this I hadn’t, and I just need to remember not to be too hard on myself when trying something new.

Luckily for me, unlike my Colca Canyon story, this time we had great guides who reminded me that I just needed to do what made me feel comfortable. Death Road certainly isn’t a race.

Our Bolivia itinerary and travel guide covers the classic two-week route along the Andes from Copacabana to Salar de Uyuni.

Take a look at our guide to things to do in La Paz during your stay. If you want to try a unique local experience while you’re in the city, then read about a night at Cholita wrestling.

Are you entering Bolivia via Peru on Lake Titicaca? Check out our two-day guide to Copacabana. We’ve also got a handy little guide to taking a Salar de Uyuni tour.

For ideas in other Bolivian cities, check out our articles on things to do in Sucre and the Potosí mines of Cerro Rico.

Have you taken on the Death Road mountain biking tour? Let us know about your experiences in the comments below. 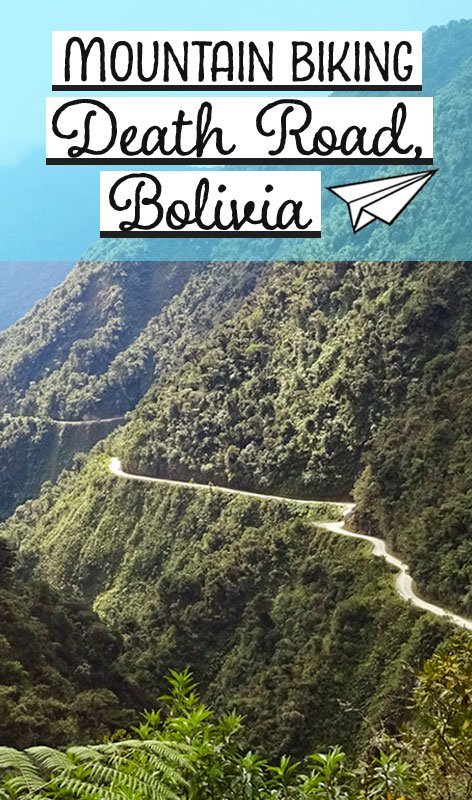