Every Thursday evening and Sunday afternoon in the outskirts of La Paz, Bolivia, crowds gather in a repurposed old warehouse building as indigenous women in traditional garb take to the ring. Cholita wrestling is a showcase of pride and athleticism that embodies a new era of empowerment for Bolivian working-class women.

What is cholita wrestling?

‘Cholita’ is a term that refers to Bolivian indigenous women of the Aymara and Quechua cultures. Once loaded with disparaging undertones, women have reclaimed the word as a badge of pride.

Cholitas are recognisable by their colourful and distinctive traditional dress. This consists typically of a long, flamboyant puffed skirt (la pollera), a frilly blouse (la blusa) and a woollen shawl (la manta). The outfit is topped off with its most iconic feature, a large bowler hat.

Women in customary cholita clothing are part of the fabric of Bolivian cities like La Paz. It is here, in the world’s highest capital city at over 3,600m altitude, they have taken the spotlight in a new form of entertainment.

Cholita wrestling is inspired by the Mexican lucha libre style and the popularised WWE form in the USA. The difference is that the combatants are cholita women in full traditional dress. The matches are choreographed and designed to entertain.

After spending a couple of days in La Paz, it seemed that every other traveller we met had been to see the show. People were raving about it. We decided to go along ourselves and see what the fuss was all about.

We booked tickets for the Thursday night cholita wrestling event through our La Paz hostel, Loki. While it’s possible to save a little money by going independently, the venue is quite a way from the city centre, in the El Alto district.

Our package included transport there and back as well as some freebies, so we thought it was worth paying a small amount extra for the convenience. We paid the equivalent of about 15 US dollars. Prices have risen a bit since as the experience has grown in popularity, and you can now book cholita wrestling in advance online.

The bus from our hostel took a good 40 minutes as it weaved through the La Paz backstreets up towards El Alto. As we climbed higher, we caught glimpses of the city’s neighbourhoods sprawled across the mountains below.

The bus arrived at Multifuncional Ceja de el Alto with time to spare before the show’s opening at 6:30pm. We had envisaged pictures of an arena with tiered seating emanating up to the stalls. Stepping inside, what we saw was actually an old warehouse, with rows of wooden chairs arranged neatly around a rickety old ring.

Before the proceedings got underway, we collected our free popcorn, soft drinks and a souvenir of our choice. We each picked out keyrings of colourful little wrestler figurines. Ready for action, we took our seats on the front row.

In a refreshing reversal of gender roles, before the headlining cholitas made their grand entrances, the action opened with a men’s wrestling match.

Then came the main spectacle. We were treated to three bouts of unrelenting, crowd-pleasing, edge-of-the-seat, deliberately-over-the-top drama.

For each contest, the rival competitors took their turns to enter in extravagant style. With music blaring, entertainers in bright costumes and masks paraded around the ring beside them. Sometimes they pulled onlookers out from the crowd for a little dance (we narrowly escaped that one!).

True to the lucha libre style, each match had a ‘face’ (the hero) and a ‘heel’ (the antagonist). The storylines followed similar patterns of collusion between the heel and the referee, who would invariably get involved.

No wrestling cliché was spared. The cholitas leapt from the corner posts, flew from the ropes, kicked out of pins at the last second, gloated to the audience, strutted, slammed and somersaulted. It was fantastic.

At the end of the show the performing cholitas came out to greet the audience, full of smiles. We joined the queue to have our photo taken with them.

Darkness had descended on La Paz by the time we boarded the bus home. Lights sparkled all over the hilly horizon as we headed back down into the city, thoroughly satisfied with the evening’s entertainment.

Why you should see a cholita wrestling show

Throughout history, indigenous Bolivian women have been marginalised. Cholita wrestling is reflective of a movement away from that past, through a new wave of expression and empowerment.

Besides the fact it’s a brilliant event and great value for money, by going to see cholita wrestling you’re supporting the women to be paid for their athletic work. Most of the performers come from underprivileged communities, and this is an opportunity for them to support themselves and their families.

One of the things we love most about travelling is the moments when we get to see something we could never experience anywhere else in the world. Cholita wrestling definitely ranks among those moments. If you’re passing through La Paz, I’d highly recommend giving it a try.

For a complete resource to planning a trip in Bolivia, take a look at our Bolivia itinerary and travel guide.

We also have articles on Salar de Uyuni tours, things to do in Sucre, and the Cerro Rico mines of Potosí.

Have you been to see a cholita wrestling show? Let us know about your experience in the comments below. 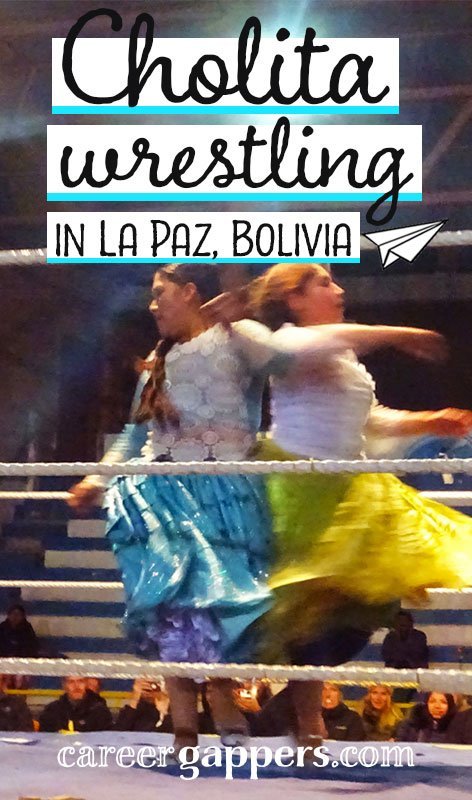