Salar de Uyuni is a vast desert of salt covering some 12,000 square kilometres in south-west Bolivia. It sits amid a high-altitude region interspersed with stunning natural phenomena, featuring many-coloured lagoons, spouting volcanoes and ancient rock formations. We explored this unique landscape on a three-day, two-night Salar de Uyuni tour; this article reviews the highlights and compiles the essential information for planning your own adventure.

Salar de Uyuni, located in the Potosí Department of Bolivia, is one of the most popular locations for adventure tours in South America. There are several ways to explore it as a visitor, from single-day excursions to multi-day tours that incorporate other sites around the region.

Most multi-day tours start from the city of Uyuni in Bolivia, with the option of either returning or being dropped at San Pedro de Atacama in Chile. It’s also possible to do the tour in reverse, beginning in San Pedro and ending in Uyuni; alternatively, some tours also run from Tupiza in Bolivia.

We booked our Salar de Uyuni tour with Esmeralda Tours in Uyuni. Our itinerary for three days and two nights included:

There are also longer tours available that include additional sites such as Tunupa volcano and a cave of Inca mummies.

While it’s easy to book Salar de Uyuni tours in advance before travelling to the region – either online or at tour agency offices elsewhere – it’s usually a lot cheaper to wait until reaching Uyuni or San Pedro de Atacama before booking.

Tours booked in Bolivia are cheaper, too. Chile is one of the most expensive countries in South America, and companies charge more.

We arrived in Uyuni late on an August afternoon, and had no problem in securing places with a reputable tour company to depart the next morning. At short notice agencies compete to fill up spaces, and we were able to haggle for a good deal.

While it can be tempting to go with the cheapest option, it’s important to take safety into account. Some companies cut corners in order to compete on price, and there have been cases of fatal 4×4 accidents on Salar de Uyuni as a result of poor safety standards. Check out the company’s safety record and procedures before booking.

If you want to remove the hassle and bypass all those considerations, you can book a 3-day Salar de Uyuni tour on GetYourGuide in advance. GYG works with the best and most trusted local tour operators, so you can be confident about safety.

After exploring the options and reading online reviews, we were happy to go with Esmeralda Tours. We paid 850 bolivianos each (about 125 US dollars at the time) for a three-day, two-night tour, which included transport, food, a driver/guide, and transfers to San Pedro at the end. In addition, we paid entry fees for Isla Incahuasi (30 bolivianos each) and Reserva Eduardo Abaroa National Park (300 bolivianos each).

One area we did compromise was that our guide was Spanish-speaking only. It would have incurred extra cost to have an English-speaking guide. When booking we were told that there were people in our group who could speak both Spanish and English, and so we knew we would be able to get by.

What to pack for Salar de Uyuni

Salar de Uyuni is at high altitude, with some parts of the tour reaching 5,000 metres above sea level. It gets very cold at night, and it’s vital to be well equipped and prepared.

Conversely, the daytime sunshine can be fierce, and is intensified by the white desert scenery of the Uyuni salt flats.
Here are the essentials you need to pack for Salar de Uyuni:

The dangers of altitude sickness are higher if taking the tour from San Pedro de Atacama. On the first day, there is a sharp altitude increase from approximately 2,400m to 5,000m.

As much of the backpacker trail in Bolivia is at high altitude, you will naturally be better acclimatised if starting from Uyuni.

Our tour set off at around 10:30am on the first day, which allowed plenty of time to enjoy breakfast and meet our group.

Having a good tour group can really make or break travel experiences, and we were lucky to be grouped with some awesome people for our Salar de Uyuni tour. The group size of six (to fit into the 4×4) was perfect for building a team dynamic.

Lisa and I were joined by Martijn from the Netherlands, and Andreas, Maja and Anita from Germany. We all got along straight away and had a great time together over the three days. We continued to hang out with Martijn and Andreas afterwards at San Pedro, where we stayed at the same hostel. The Salar de Uyuni tour was one of the best tours we’ve taken on our travels for meeting new people.

We began with a trip to a peculiar attraction just a couple of kilometres away from Uyuni city centre: Cementerio de Trenes (the ‘Train Cemetery’).

Uyuni was once a major transportation hub for bringing natural resources from the Andean mountains out to the Pacific Coast. But after the region’s mining industry collapsed, hordes of trains were rendered redundant and left outside to decay in the Bolivian salt winds.

After half an hour of climbing around the eerie old locomotives, we headed to Colchani, a nearby village, where we made a brief stop to visit a salt factory and explore the local craft markets.

Back in the 4×4, our driver, Alfio, put his foot down and we sped into Salar de Uyuni. For lunch, we stopped at Hotel De Sal Luna Salada, the world’s only salt hotel. Right outside the hotel we had a chance to take photos at the famous ‘Bolivia’ sign.

We spent the afternoon of day one discovering the white desert scenery of Salar de Uyuni. Star Wars fans might recognise the landscape from the final scenes of The Last Jedi; the Bolivian salt flats were used as the set location for Planet Crait.

Alfio had brought a dinosaur toy along for our perspective photos, and luckily for us he knew how to take the shots – it’s a lot trickier than you might think!

Once we were all happy with our photos, we headed on to Isla Incahuasi (Fish Island). This rocky, cactus-riddled island is surrounded by the salt desert, and a short climb to its summit is rewarded by a beautiful panoramic view.

After enjoying the different views from Isla Incahuasi, Alfio took us to a great spot to watch the sun setting on the salt flats. Definitely one of the most memorable sunsets of our travels!

Finally on day one, we made for the small town of San Juan for our first overnight stop. After a hearty meal we did some top-class team bonding over a few games of cards.

The first day had set the bar high in terms of scenery, but there was still plenty more to come. After breakfast, we set off at about 8am towards a viewpoint to see Ollagüe, a towering, active volcano peaking at 5,865 metres. En route, we stopped to take some photos at a long, straight train track running through the desert.

After catching a glimpse of the volcano, the remaining bulk of the day consisted mainly of lagoon-hopping. We passed by Lagunas Cañapa, Hedionda, Chiarcota and Ramaditas, stopping for lunch and to watch flamingos frolicking in the water.

As the day’s light began to wane, we made a stop at Árbol de Piedra in the Siloli Desert, a site of ancient rock formations.

Finally, the highlight of the day was one last lagoon: Laguna Colorada, the ‘Red Lagoon’. A flamboyance of flamingos (yes, that’s the correct collective noun) bathed in the luscious red waters, an amazing sight against the backdrop of mountains and perfect blue sky.

A short drive from Laguna Colorada took us to the small village of Huayllajara, our stop-over for the night. At around 4,000 metres above sea level, this was the highest altitude at which me and Lisa had ever slept. For a little treat on our last night, Alfio rocked out a couple of bottles of wine for us to enjoy with dinner.

In close proximity to the Atacama Desert, this part of Bolivia has some of the world’s most impressive night skies. We set our alarms super early and got up for a spot of stargazing. Our luck was in, and the skies were clear; the view above was spectacular.

After our early morning stargazing we got going quickly on day three, and by 6am we were off in the 4×4 again. We headed up to the nearby geysers at nearly 5,000m altitude.

After stopping to admire the fumaroles emitting volcanic gases, we moved on to take a bath in some natural hot springs. The temperature change from the cold, thin mountainous air to the 30-degree-celsius water was amazing!

There was still a little time remaining to visit some more colourful lagoons. Near the foot of Licancabur Volcano, standing at 5,930m just across the border in Chile, we made stops at Laguna Blanca (the White Lagoon) and Laguna Verde (the Green Lagoon).

With the tour drawing to a close, we made the short trip to the Chilean border. After queueing and paying our 30 boliviano exit fee (the only time we’ve ever had to pay to leave a country!), we made it through and waited for our bus transfer to San Pedro de Atacama.

If you’re planning to spend any time in San Pedro either side of your Salar de Uyuni tour, check out our article on things to do in San Pedro de Atacama.

Where to stay in Uyuni

Before our Salar de Uyuni tour, we spent a night at Piedra Blanca Backpackers Hostel in Uyuni. We had an excellent experience here – it had everything we needed in preparation for our tour. It’s a clean, modern place with hot showers, a nice chill-out area, comfy beds with lights, lockers, and strong wifi. The free breakfast was awesome, too, with eggs included!

If hostels aren’t your thing, then there are range of other options available on booking.com.

Where to stay in San Pedro de Atacama

After our Salar de Uyuni tour we spent five nights at San Pedro Backpackers in San Pedro de Atacama. This place was the perfect hangout place for a few days, with an outdoor bar by a bonfire, and hammocks fitted around it spacious gardens. It also has two well-equipped kitchens, so we took the chance to cook a group meal.

As always, more options are available on booking.com.

If you’re spending more time in the country, check out our Bolivia itinerary and travel guide, which covers the classic two-week route. You might also find some of our other articles useful:

If you’re heading into Chile after your Salar de Uyuni tour, also check out our two-week Chile itinerary and ideas for things to do in San Pedro de Atacama.

Have you taken a Salar de Uyuni tour? Post about your experiences in the comments below. 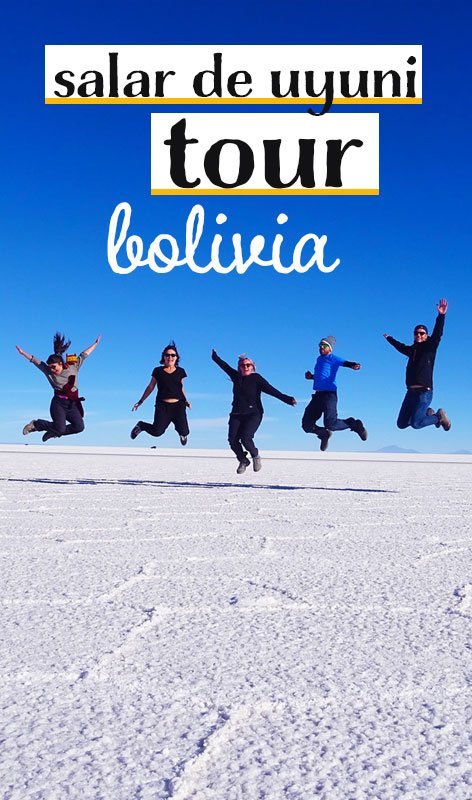