The Potosí mines of Cerro Rico: inside the ‘mountain that eats men’

Standing over 4,000m above sea level in the Andes of Bolivia, Potosí is one of the world’s highest cities. Towering even higher above it is the imposing peak of Cerro Rico. The name translates directly as the ‘rich hill’, but is more notoriously known as the ‘mountain that eats men’.

The Potosí mines of Cerro Rico, reaching deep inside the mountain, are at the root of this fateful nickname.
The Cerro Rico mines churned out huge quantities of silver during the Spanish colonial era. At the height of production, Potosí had a population larger than London and Paris.

The mines’ notoriety stems from their frightening mortality rate; Cerro Rico is estimated to have claimed around 8 million lives since the 16th century.

The mines are still in operation today and are a cornerstone of the city’s economy. Safety standards, however, are barely better than colonial times; with meagre working conditions, inadequate equipment and scant nourishment, life expectancy for the 15,000 or so miners employed today is around 40.

Situated along the popular backpacker routes between La Paz, Sucre and Uyuni, much tourist traffic passes through Potosí, and the mines have become a point of focus. A growing number of tour companies offer excursions inside the mountain, giving an insight into the conditions and lives of the miners, and the importance of the industry to the region’s history.

Is it ethical to tour the Potosí mines?

At the outset of our world travel I said I would say yes to everything; however, when I first read about the Cerro Rico mines I was extremely apprehensive about taking one of these tours. Not just because of the potential dangers involved, but also the voyeuristic nature of it: wasn’t this just deriving entertainment of sorts from witnessing the sufferings of others?

Needless to say, Lisa and I did a lot of research about the mine tours before making a decision. Eventually we opted to go for it; the dealbreaker being that the miners themselves have welcomed the influx of tourism, and indeed directly benefit from it. There is also no better way to learn about the livelihoods and cultures of a new place than by exposing oneself directly to them.

We found out that one of the tour companies, Big Deal Tours, is run entirely by ex-miners, and although it is a little more expensive than other tours, they put a lot of money back into supporting the mining community and improving working conditions. On this basis, we went ahead with them.

Our multilingual tour guide, Wilson, an ex-miner, eased us into the tour by explaining all of the potential hazards of the mines and typical historic causes of fatality. These include: toxic gases, runaway wagons, getting lost in the dark and falling down dark holes, and – most commonly – contracting silicosis from the constant intake of dust.

We began with a trip to the miners’ market, where we had the opportunity to buy gifts for the miners who we would meet later in the day. We chose to buy some dynamite (definitely something I’ve never bought before), some fizzy pop, and a large bag of coca leaves. Chewing coca leaves – the source for making cocaine – helps with altitude sickness.

After being kitted out with overalls, boots, facemasks and helmets with flashlights, we visited the refinery to learn about the process of extracting minerals from the mined rocks. Then, it was time to venture underground.

We entered the mountain at 4,400m above sea level. At such altitude the oxygen in the air is already thin; deep in the mines it gets thinner still. Basically, the combination of being underground and in the sky at the same time makes for difficult breathing.

Wilson had already explained to us that the wagons used to transport rocks out of the mountain do not have brakes, and so can be very dangerous. As we delved deep along the tracks and daylight disappeared behind us, he warned that if a wagon were to come along, we would need to run back to the rare spots with safe space to the side of the tracks.

Not two minutes later, a cry of “WAGON!” came from the front of our procession, and back we all scurried to the nearest safe spot, hearts pounding. When the wagon in question came past, the miners pushing it were able to draw it to a halt, and we had our first chance to speak with them and pass on our gifts.

As we ventured deeper, not only did the air thin but the temperature rose. Wilson told us that much further down in working areas of the mines, temperatures reached 50 degrees Celsius, and so the miners worked naked.

Not for the claustrophobic

Also the further we descended, more dust and fumes infiltrated the air. Our facemasks helped keep the dust out, but also made it harder to breathe – I nearly fainted more than once amid my dizziness. In places the tunnels and shafts became so cramped that we had to crawl on hands and knees. With our hands now doused in potentially toxic minerals, we had to avoid touching our eyes, noses and mouths.

The distant rumble of dynamite below shook the ground at times as we jumped over gaping holes and waded through muddy water. A 70-year-old miner came past pushing 50 kilograms of rocks.

We came to a sudden halt, and for a few nerve-wracking seconds I wondered what was going on. It turned out that the planned route ahead was closed, and so we took a detour. This involved crawling back to one of the aforementioned gaping holes, and then climbing down it.

As we scrambled in a line down the hole, any slip would send stones and rocks cascading down on those below. I lost my footing at least twice and slid downwards before regaining my grip. At the bottom, Wilson cautioned us to keep moving quickly to avoid falling rocks.

Close to our resurfacing point, we stopped by one of many statues of ‘El Tio’, the devil god of the mines. Highly superstitious, the miners give offerings of alcohol, coca leaves and cigarettes to the devil statues to keep them safe.

Wilson then told us more about the order of work in the mines. Most miners are part of one of 38 cooperatives, groups that pool resources and collectively organise to protect miners’ interests and improve conditions. It is not unknown for cooperative members to take their dynamite to the streets in protest against unfavourable government policies.

The miners in Cerro Rico can actually earn good money in comparison to other local industries; some can earn around four times the national average salary. However, this is of course compromised by their working conditions and living standards.

After Wilson concluded his account – and a wonderfully insightful account it was – he passed round a bottle of pure alcohol for us to taste. The miners prefer to drink pure alcohol as it’s cheaper to buy than beer, and of course more potent. So the obvious hazards of the mines are not the only cause of premature death– there are also the habits and addictions so easily propelled by the lifestyle. Feeling oddly sobered, we shuffled on towards the exit.

By the time we saw daylight looming again, we had been in the mountain mines for two hours. The typical miner at Cerro Rico works eight-hour shifts for seven days a week, many beginning at a very young age – Wilson started at eight. He is the same age as me, and has been working in these mines for 26 years. I have no words.

I think I was right to be apprehensive about taking the Cerro Rico mines tour, but I am so glad I did it. No experience I’ve had has been as eye-opening or humbling.

Some time next year I will step back into a London office job. I will definitely think twice before grumbling about it.

If you’re planning a trip to Bolivia, you might find our other articles useful:

Have you visited the Cerro Rico mines in Potosí? Let us know about your experience in the comments below. 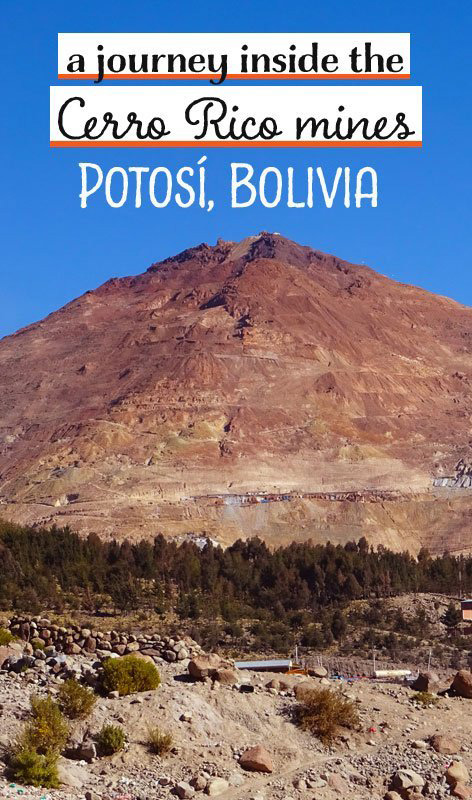 One thought on “The Potosí mines of Cerro Rico: inside the ‘mountain that eats men’”