“The secret of success in life is to eat what you like and let the food fight it out inside”, said Mark Twain. That was pretty much our mantra for five months of travelling across South America, and I can thoroughly recommend it. As travelling foodies, sampling the local cuisine is always important to us. So, after five months of travelling across the continent of cuisine, here we take a look at some of the famous foods in South America to try on your travels, as well as some recipes if you want to try making them yourself.

When I am at home I am quite a regimented eater, but it’s just not possible when travelling – at least not in South America. The standard breakfast fayre in hostels is bread, jam, cake, and if you’re lucky, some cheese and meat. If you want to indulge in the national cuisines, prepare for some oily and fatty goodness in the most part.

Food was one of our greatest joys in South America, and so here I have collated a few of the best dishes we sampled, focusing on the five countries where we spent the most time – Peru, Bolivia, Chile, Argentina and Brazil, in that order. I’ve thrown in some links to recipes in case you want to try them at home rather than travelling halfway across the world, although if you want the real deal, you’ll need to do the latter.

For more insights into exploring these countries, take a look at this guide to the best countries to visit in South America. But for now, it’s time to talk food…

Peru is a country with intense pride in its food, and gaining increasing international recognition for it. The signature dish is ceviche, which comes in different forms, but the classic is raw white fish marinated in lime, coriander and red onion, served with corns and a wedge of sweet potato. As a sushi enthusiast, this was my absolute favourite.

It makes a big difference where you try ceviche. You can find it cheaply on market stalls and in backstreet cafés, but you’re taking a risk with quality and, more significantly, the likelihood of rendering yourself bedridden with food poisoning. You might get lucky and find a gem, but for a guaranteed top-notch ceviche, head to the renowned restaurants in Lima’s Miraflores or Barranco districts. Our best experience was in Punto Azul in Miraflores, and it didn’t break the bank either – about USD $10–$15 a serving.

In Punto Azul we also had our best causa – a potato-based dish usually served as a starter or side. Peru produces over 3,000 types of potato, and so it’s a big part of the national cuisine. Creative cookers will love causa as there is a LOT of room to experiment with ingredients and presentation. The basic formula is a paste of mashed potato, pepper and lemon juice that can be filled or topped as you please – it looks like a posh sandwich. We tried it with fish and chicken, but pretty much anything goes.

Another Peruvian staple is lomo saltado, a simple stir fry of beef strips, onion and tomato, typically served with rice and chips. This was one of our go-to choices in Peru’s menu-of-the-day joints where we spent most of our lunchtimes.

Up in the Peruvian Amazon, as a treat for Lisa’s birthday we indulged in a meal at Al Frio Y Al Fuego, a floating restaurant in the middle of the river in Iquitos. I tried one of the local specialties, a concoction of Amazonian foods including juane, a mixture of rice, chicken and olives wrapped in leaves and boiled. You don’t need to go to a posh restaurant to try this, though – it’s available everywhere. If you go on one of the jungle tours, it’s likely you will encounter it at the lodges.

Our stay in Bolivia was shorter than in Peru and without as much exposure to the local food, but we still managed a few indulgences. We began our passage through the country at Copacabana on Lake Titicaca, where the culinary highlight is fresh trout from the river served with chips.

One national classic dish is pique macho, a heaped plate of beef, fried potatoes, chicken, egg, onions, sausage and peppers, and sometimes other random goodies. It’s a brilliant hangover-killer, usually served with giant dollops of ketchup and mayonnaise. I tried this thrice and loved it every time, my favourite in 4060, a tucked-away restaurant in the high-altitude mining city of Potosí.

Chile also considers ceviche as its national dish, and while we preferred the Peruvian version it’s definitely worth trying here, especially in the coastal city Valparaíso where the catches are fresh.

The country produces a huge amount of avocado, and it’s eaten with almost every meal. You’ll find it amazingly cheap at veg markets, and so if you get bored of jam for breakfast, grab a palta to have on your toast the next morning.

It’s one of the key ingredients in the Italiano, a classic Chilean lunch bite available in abundance in Santiago cafés. It’s essentially a large hotdog doused with ketchup, mayonnaise and avocado, with the resulting red, white and green colours resembling the Italian flag, hence the name.

A confectionary treat found all over South America is the alfajor (plural alfajores). It’s a bit like a cookie, filled with dulce de leche – a caramel made with milk – and typically coated with chocolate or coconut. We had our best alfajores in Valparaíso at the house of Don Sergio, a local legend.

Another South American classic perfected in Chile is the empanada, a pastry snack stuffed with meat and potatoes that resembles a miniature Cornish pasty. It’s usually available with other fillings too, such as chicken or cheese and ham. For one of the best, join the long queue at Empanadas Zunino in the heart of Santiago at midday. If you’re still hungry after that, you can’t do better than walking a few blocks to Fuente Alemana, the subject of a previous article I wrote on account of its incredible meat sandwiches.

Those classic South American snacks are everywhere in Argentina, too – you will find empanadas and alfajores in bakeries throughout this vast country.

Argentina’s proudest culinary tradition, however, is its steak. You won’t find better meat anywhere in the world than in the restaurants of Buenos Aires – I go into much detail about this in my previous article that reviews several steak outlets in the capital.

One of the most traditional ways to enjoy steak in Argentina is as part of an asado meal. If you can visit a local asado when visiting Buenos Aires, there’s really nothing like it. Very much a social event, an asado involves many different cuts of meat barbecued on a parrilla grill for several hours.

Steak in Argentina is best served with some chimichurri sauce, which is also very easy to recreate at home.

For something a bit different, you can try the Argentinian dish locro, a thick stew of corn, beans, potatoes and mixed meats. It’s particularly popular close to the Andean mountains, and best enjoyed in the winter. We had our best locro in the north-west, with a stand-out experience at La Peña de Carlitos, a restaurant in the small rock-mountain-surrounded town of Tilcara.

The cuisine in Brazil is markedly different to the other South American countries on our journey, owing largely to the Portuguese and African influences.

If you are a meat lover you can’t visit Brazil without trying a churrascaria, an all-you-can-eat extravaganza. Just make sure you start on an empty stomach. The set-up is usually that you pay a set fee and help yourself to a salad buffet, before you are served different cuts of meat on skewers, which keeps coming until you can’t eat any more. We tried it at Churrascaria Palace in Rio de Janeiro, which boasts over 30 different cuts of meat.

An excellent but lesser-known Brazilian dish is feijoada, a hearty stew of beans, beef and pork, originating in Portugal, but not dissimilar to Argentina’s locro. In Brazil you’ll usually find it heavily salted and containing plenty of sausage – Rio’s Lapa district is one of the best places to try it.

Brazil also has a lively tradition for street food. In the historic Pelourinho district of Salvador, we tried acaraje, deep-fired bean fritters filled with shrimp. This was about as greasy as a street snack gets, but my god was it delicious, finger-licking fulfilling, and super-cheap as well.

If you’re visiting South America and you are just as much a drinkie as a foodie, you might be interested in my previous article on the signature drinks of South America. The countries we visited put every bit as much creativity into their alcohol as they do their food.

I started this article with a quote about food, and will end with another, by my favourite author of fantasy and travel, J.R.R. Tolkien: “If more of us valued food and cheer and song above hoarded gold, it would be a merrier world”. 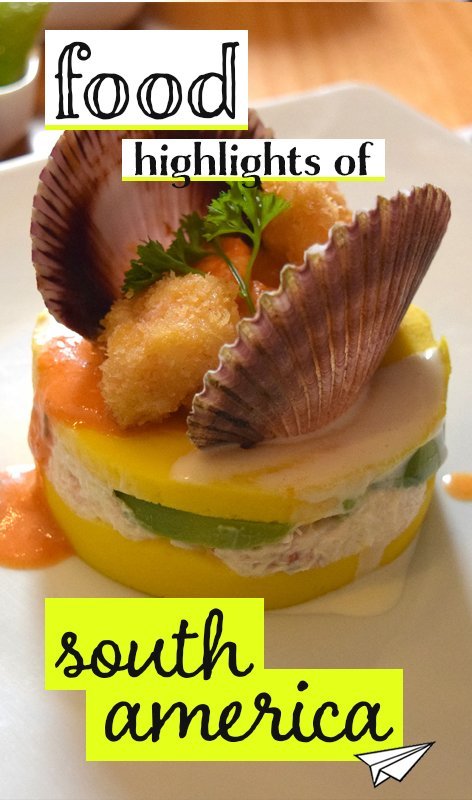 One thought on “Famous food in South America: best dishes to try”