With a restrictive travel budget it’s difficult to be a foodie on the road. Peruvian food is gaining worldwide recognition, but as a backpacker, eating in regular restaurants can get expensive. If you’re travelling in Peru on a budget, menú del dia restaurants (or just simply ‘menús’) are a great way to live like a local and get a taste of the country’s most famous dishes.

We spent a month in Peru at the beginning of a one-year travel career break. While we allowed ourselves the occasional treat in the country – for example the spectacular floating river restaurant Al Frio y Al Fuego in Iquitos – we couldn’t afford to dine out all the time.

However, after a tip from a friend who lives in Lima, we soon discovered the local quirk that is the menú (pronounced “m’noo”) restaurant. These are homely eateries, often more like little cafés and usually only open from about noon until 4pm, that offer two- or three-course meals with a drink for bargain prices.

Menú del dia restaurants don’t tend to be frequented by a lot of tourists. They are usually teeming with locals socialising over lunch. If you’re the kind of traveller who likes those authentic cultural experiences, then they’re are a must-try while you’re in Peru.

Thanks to these places, we were able to eat out almost every day during our time in Peru. The prices vary from city to city, but in general we paid anything between 6 and 16 Peruvian soles each (about GBP 1.50 to 4). The very cheapest we found was in Puno for 3.5 Peruvian soles (about 80 British pence, or one euro).

Menú restaurants are extremely hit and miss, however. As you might expect, the less you pay the more likely it is to be a miss, but that wasn’t always the case. We managed to navigate our way around most of Peru’s signature dishes at a combination of menús in different cities.

Below I compile some of our best and worst experiences. I have included links to restaurant websites where I could find them.

Peru’s capital, the natural home of the country’s finest dining, was the first stop of our journey. It was here we tried our first ceviche, the country’s most famous dish, which mainly consists of raw fish pieces in a lemon, chilli and coriander dressing. A good ceviche is like heaven.

We didn’t end up eating ceviche in a menú del dia, mainly because it always comes at a premium price. We preferred to experiment with the basic menu of the day options and save ceviche for our occasional treats (the best one we had was at Punto Azul in Miraflores).

We had our first menú del dia experience in Lima’s Barranco district. I have to admit – it took a while for us to get the hang of it! As it was our first day of travelling in South America, our Spanish was very basic and we couldn’t figure out how the place worked. As a result of a misunderstanding, we realised afterwards that we had missed out on a soup starter that was supposed to be part of the menú deal. We skipped straight to the main of chicken and rice (a common basic menú dish) with a glass of orange cordial.

In Lima we also had our first sample of ‘Chifa’, a cuisine that fuses Chinese and Peruvian styles. One of the few menú del dia restaurants we encountered that opened in the evening happened to be a Chifa, and so we took advantage. At Chifa Tau Tau we paid 16 soles each for a choice of soup or wonton for starter, followed by a huge place of arroz chaufa (a rice dish) and meat, with a bottle of fizzy soft drink.

For some ideas about how to spend your time in the city, check out what to do in Lima: a two-day guide.

Living costs in the Peruvian Amazonian city of Iquitos are much cheaper than Lima and other major cities in the country. Within a short vicinity of our hostel we found menús for as cheap as 5 soles, and we rarely saw any higher than 12 soles.

The menús in Iquitos often felt like we were eating in someone’s home kitchen, especially those further away from the city centre.

It was in Iquitos that we enjoyed one of our best menú meals, at a city centre place called Pikanto. We paid just 10 soles each for three courses and a drink. For our starters we had causa, a delicious Peruvian dish of mashed potato infused with citrus and filled with meat or fish. As the vast majority of menús only offer soup or salad as the starter, this was a real treat.

For the main we both had lomo saltado, another Peruvian classic – strips of beef fried up with peppers and onions, and served with rice. Instead of the usual cordial we had chicha morada, a sweet local drink made from the juice of purple corns. Finally, for dessert we had a fruit jelly cup.

If you’re visiting the Peruvian Amazon, take a look at our guide to Iquitos.

We stayed in Nazca for two days, which frequently welcomes travellers who visit to see the famous Nazca Lines. We found the city itself to be fairly quiet with not a huge amount to see and do.

What it did have was a lot of cheap menús, many at just 6 or 7 soles for two course and a drink. On the first day there Lisa was bedridden with illness, and so I wandered out to sample a couple of these places on my own. The fare was mostly the same – soup followed by chicken and rice.

Lisa perked up on the second day, and after flying over the lines we grabbed another menú in the town centre, a couple of blocks west of the main plaza. This was one of the better ones, although we spent 15 soles each as drinks weren’t included. Like many menús, it offered different dish options from basic at 9 soles to premium at 12 soles.

The highlight of this place was papa a la huancaina for our starter. This is a Peruvian speciality of sliced potatoes in a creamy sauce of cheese, milk and spices. My main was tasty, too – beef steak served with chips, fried plantain, a fried egg and salad.

We spent two days in Cusco acclimatising to the altitude before hiking the Inca Trail with G Adventures. We stayed in the pretty district of San Blas, full of stony steps, colourful buildings, great city views, and most importantly, lots of places to eat!

The menús here were quite different to other cities. They tended to be a bit more pricey (typically 15 to 20 soles), but offered slightly classier dishes with more variety. For example, on the first day we had vegetable lasagne and a fruit smoothie drink in an arty menú restaurant with a view.

We found a gem of a menú del dia in Cusco after returning from the Inca Trail, again in San Blas – Granja Heidi, which we’re sad to hear has since closed. With an upstairs balcony overlooking the city, we paid 15 soles each for two courses and a drink. Lisa took the opportunity to try some Alpaca steak, which has a similar taste to beef but is much leaner, while I ordered spaghetti and pesto. For a drink we had refreshing homemade lemonade.

We didn’t end up trying guinea pig, which is a very popular delicacy in Cusco – we couldn’t find it for any cheaper than 35 soles each, and it certainly wasn’t offered in any menús.

In Cusco, we also discovered another great way to eat in Peru on a budget – local markets. The city’s huge San Pedro market has a whole section of hot food stalls, and on our last day there we got a huge plate of chicken, avocado, salad and rice for 6 soles each.

For more inspiration for your trip, check out our article on things to do in Cusco. If you’re here for the hiking, also check out our ultimate Peru trekking guide.

Peru’s second most populous city, Arequipa, has no shortage of options for eating out. We found it to be on the expensive side, though, so we stuck with our formula of visiting menús for lunch and home-cooking for dinner.

We stayed in the Vallecito area of the city, about 20 minutes’ walk from the centre. Close to our hostel we found a couple of very good 7 soles menús. In the best of these, we enjoyed some spicy marinated pork chops after a huge vegetable soup starter.

As with Cusco, the local market in Arequipa is a great way to eat on a budget. Mercado San Camilo, a short walk from the main plaza, has a choice of food stalls and a great selection of cheap meat, vegetables, dairy products and more.

On our final night in the city, after a tough experience trekking the Colca Canyon, we decided to treat ourselves to a meal out. After scouring the city centre for somewhere nice, we found a lovely little restaurant called Mirador Misti, with a romantic outside balcony area overlooking the Basilica Cathedral. The prices were very reasonable and the food was not bad at all.

For more ideas for your trip, read our article on things to do in Arequipa.

Our final stop in Peru was at Puno on Lake Titicaca. We spent less than 24 hours in the city, which did not include a lunchtime, and so we didn’t eat in a menú. We did see a lot around, though, including the above-mentioned 3.5 soles one. Most notably there were several menús offering trout from the lake.

Menú del dia restaurants exist all over South America, but outside Peru they tend to be more expensive and a lot more geared towards tourists. We found the Peruvian menú experience to be a brilliant way to sample local cuisine and culture while sticking within our travel budget.

Peru on a budget: further reading

We kept a record of everything we spent during our month of travel in Peru. For insights into costs and budgeting in the country, read our breakdown of travel spending in Peru. 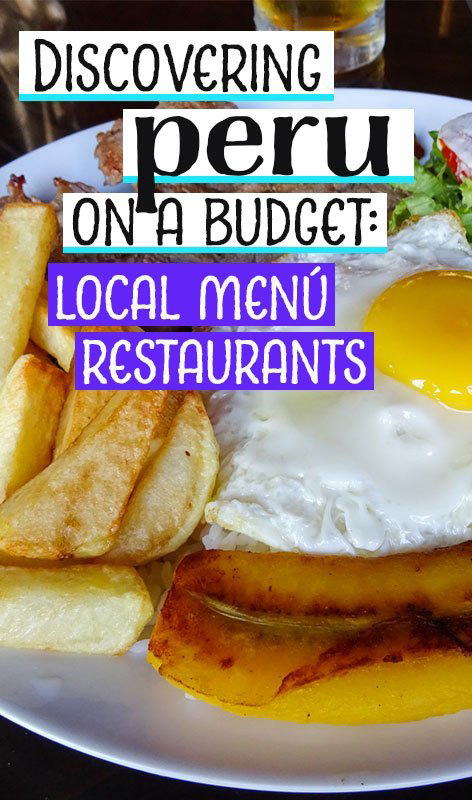