Fuente Alemana Santiago: is this the world’s best meat sandwich?

I love sandwiches. They’re probably my favourite kind of food. That’s why I’m here to tell you about the biggest, greasiest, messiest, meatiest, most delicious mother of all sandwiches I ate yesterday in Santiago de Chile. Welcome to Fuente Alemana, Santiago de Chile.

I don’t blog about food too often, and it has to take something special to prompt me to do so. Fuente Alemana, Santiago’s legendary sandwich shack, might not be classy, chic or polished, but it certainly is special.

I heard about Fuente Alemana thanks to a tip-off from another traveller I met in San Pedro de Atacama, an American called Alex (great name) who recently spent several months living in Santiago. He told me that the place is a local institution, describing it as “very famous, very good and very Chilean”.

With a humdinger of a wine hangover – which we seem to be getting with startling regularity at the moment, thanks to the irresistible allure of South American vino – Lisa and I, together with Quentin, a travelling companion from France who we met in Mendoza, headed into the city centre to check this place out.

After the forty-minute walk from our hostel, we were weary, hungry and not having the best day of it. That was all about to change.

From outside, Fuente Alemana doesn’t look like much. I was half expecting it to be hidden away on some quirky little back street. Instead, we found it on one of the city’s large, generic, busy, noisy, colourless high streets, a couple of doors away from a McDonald’s and a KFC and a mass of people standing about at traffic lights.

The entrance was so unremarkable that at first I walked past it. Stumbling inside, we found a large, square, room with a large, square kitchen area in the middle, with seating arranged all the way around it. In the middle, chefs were frantically at work with legions of raw red meat, piling it into bread buns with all manner of slop and sundries, while people sat around the outside of the square stuffing their faces merrily.

We weren’t quite sure what to do. There was no space to sit, barely to move. Beside the entrance was a small counter with a woman sitting at it, and above her a menu board in Spanish. We tried to order from her, but she garbled back at us pointing at the square area in the middle. Thankfully Quentin’s Spanish was better than mine and Lisa’s, and he deduced that we needed to wait for some seats and order from the kitchen area.

Before long we were seated, with a menu in English to hand. There were a handful of meat options available – beef mince, pork mince, beef and pork mince together, pork in gravy, beef mince with garlic and chilli – each with a selection of accompaniments, such as avocado, tomato, mayonnaise, onions and melted cheese. We each chose different options, and put in the order.

When the sandwiches arrived, it was impossible to distinguish one from another. We basically had three giant calorific mountains of bread bun, red meat, tomato, onion and hot cheese, bathed in rivers of thick, creamy mayonnaise. After a couple of minutes trying to poke inside and work it out from the contents, we gave up and just took one each at random.

I was thankful for the knife and fork provided, as it would have been impossible to eat this colossal mess by hand. With my six-weeks-unshaven travel beard, half of it would have ended up on my face. So I stuck in with the cutlery. And – my word – it tasted goooood.

There is good grease and bad grease when it comes to this kind of food. This was firmly at the top of the ‘good grease’ end of the scale. It was an avalanche of flavour as satisfying as you could possibly imagine with a head full of last night’s wine. When I finally defeated my meal, I had to finish off Lisa’s too, as she couldn’t manage it. There was no way I was going to let meat that good be thrown away!

We retrieved our bill from the kitchen staff and went over to the woman at the counter to pay. Amusingly, behind her we saw a ‘wall of shame’ – CCTV pictures of people who had left without paying, together with the date of the crime.

For the three of us, the bill was 21,000 Chilean pesos, which is about 25 British pounds. Possibly the best food money I’ve ever spent. Or course, I felt pretty damn terrible afterwards, rolling back out into the street with a bellyful of grease. Terrible but satisfied. With mission accomplished, off we mooched to find the biggest hill in the city to climb it off.

Looking for more inspiration for your travels in Chile? You might find our other articles useful: 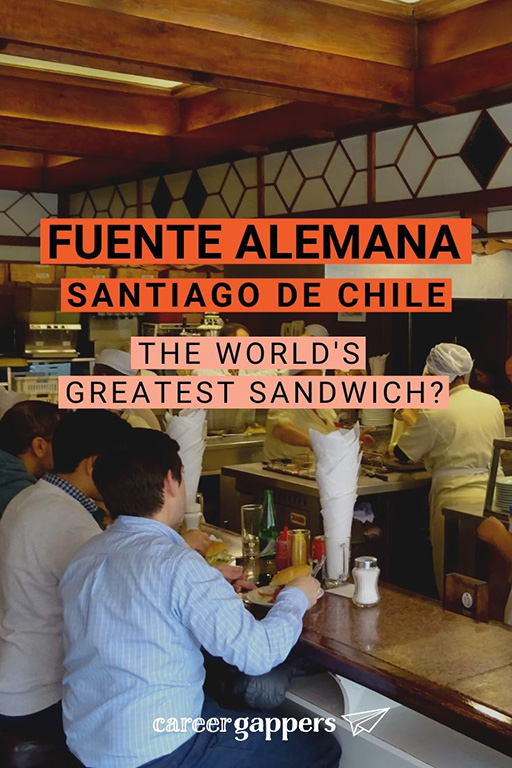