15 drinks in South America you must try on your travels

It’s no secret that the cultures and cuisines differ vastly in all corners of this vibrant continent. Perhaps the most enjoyable way for travellers to learn more about the people and histories is through the variety of drinks in South America.

There are far too many to list in one article, so we have stuck to 15 that we tried and loved.

Our South American journey began in Lima, Peru. You can’t go far here without encountering pisco sour. It’s a sharp-tasting cocktail made with pisco (a fortified brandy that tastes a little bit like tequila), egg whites, lemon juice and sugar or syrup.

This drink is everywhere in Peru, and – as we would later discover – Chile as well. The two countries contest an animated rivalry over where it originated; both claim it as their national drink.

In Peru you’ll find chic dedicated bars serving all sorts of flavours, from root vegetables to passion fruit. Look out for locals drowning in the stuff late into the night with platters of olives and meats and cheeses.

On the budget end of the scale, you can just take a walk around any urban bar area to find ‘happy hour’ discounts. For travellers, most hostel bars offer pisco sours, and usually at cheaper prices than out and about.

By the way, if you’re planning to head to Peru, check out our 28-day Peru itinerary for some inspiration for your trip.

Perhaps one of the most famous drinks in South America is Brazil’s caipirinha. This heavenly cocktail is made with the Brazilian liqueur cachaça, lime and sugar.

We had tried something similar before in London, where all the ingredients are the same except it’s made with vodka – known to us brits as a cairpiroska – but nothing prepared us for just how incredible cachaça makes this moreish drink.

The ultimate way to enjoy a caipirinha is at one of the dozens of bars along Copacabana beach in Rio de Janeiro, all competing to give the best offer. Another great option is the night street stalls in the city’s famous Lapa area, where you can find giant caipirinhas with lime or peach for 5 reais (roughly one British pound).

One of Chile’s more unusual signature cocktails is the terremoto, which translates into English as ‘earthquake’, and I can attest that it lives up to the name.

Served by the pint, the prime ingredient is pipeña, a fermented Chilean wine. Add a dash of grenadine, and finally a large scoop of pineapple ice cream – yes, you read correctly – and you have your terremoto. You can order it red or white.

For the authentic terremoto experience, head to La Piojera, a rough-and-ready bar in the middle of Santiago teeming with locals clocking off work. Be warned though, just a pint of it is enough to send the most hardened of drinkers a little bit crazy.

Another Chilean peculiarity is jote (pronounced HOT-TAY), a fifty-fifty mixture of red wine and cola, popular among young folk in the coastal city of Valparaíso. Quite understandably though, vino fanatics tend to frown upon the concoction as an unthinkable monstrosity.

However, if you’re a traveller on a budget it’s not a bad way of sprucing up some of the cheapest boxes of red wine if you are pre-drinking for a night on the town.

Although this drink is European, it’s a huge hit with Argentinians and can be found in all of the bars of the country’s capital, Buenos Aires. In fact, it’s such a huge hit that it is now listed as the country’s signature drink.

Served with cola, Fernet is a herby, spicy liquor that is quite bitter. It’s not our favourite drink in South America but it’s a good one to try.

Taking advantage of the Bolivian altitudes, the vineyards that produce Singani are legally required to be at 1,600m above sea level or higher. Not dissimilar in ingredients to Pisco, Singani is made from white grapes and is classified as a brandy, which is drunk by Potosí miners and tourists alike.

It can be drunk straight, with ice and a slice, or you can find it in trendy cocktail bars all over Bolivia. We would recommend trying it in a cocktail…

For a boost on your night out, just like Europe the go-to solution across much of South America is the jäger bomb. One hostel chain in Bolivia, however, has its own take on the alcoholic energy drink.

We stayed in Loki in La Paz, which churns out hundreds of ‘blood bombs’ in its seventh-storey sky bar every night. Even so, after a good few nights of fuelling our city mayhem with these, we still weren’t sure exactly what went into them – my best guess is vodka, grenadine and a local brand energy drink.

Everybody who has travelled in South America will know about dulce de leche, a sweet, thick caramel-esque sauce made with milk and sugar. It is used on everything, everywhere and eaten at any time of day. It’s a staple on bread or cake at breakfast, smeared on pastries, rolled into pancakes, and the core ingredient of most desserts and sweet snacks.

This craze is at its most intense in Argentina, where you can find supermarket shelves lined with an alcoholised version of the stuff: dulce de leche liqueur. Think chocolate Baileys but with a caramel twist.

Bottles of the most common blend by Tres Plumas are remarkably cheap (typically 35 Argentine pesos), or souvenir shops sell more luxurious versions, in particular down in Patagonia.

Over in Uruguay the taste in sweet alcoholic drinks is slightly more refined. At the end of a walking tour in the capital, Montevideo, we were treated to a sample of grappamiel, the country’s celebrated honey wine.

It was immediately obvious why street musicians like to sup this in the winter; it warms your insides good and proper. It is traditionally served in a short copa or in a tall glass on ice, but cocktail bars also experiment with novelty flavoured versions.

Drinks in South America: the classics

We know, we know. How can we list ‘wine’ as one drink? Honestly, there are too many different types of wines for you to try and everyone has a preference. We’ve listed wine because you just have to try as much as you can by going on as many bodega tours as possible.

It’s South America’s most famous alcoholic export, with Argentina (try the Malbec) and Chile (go for the Pinot Noir) competing fiercely for the title of best wine producer.

We’re definitely not wine connoisseurs, but a few days on the Argentinian wine route altered our aspirations in that department. Mendoza is the country’s vino capital, home to around two thirds of its wineries, and there’s no better way to enjoy the city than by touring a few of them on a bicycle.

A thousand kilometres up the famous Ruta 40, Cafayate is the hub of the northern wine region, flanked by sloping mountains on one horizon, red rocklands the other, and gorgeous vineyards in every direction as far as the eye can see. We bought a beautiful bottle from Nanni, an organic winery in the town centre.

Again, there are too many different types of beer to just select one for this list. Always beer lovers at heart, we were happy to discover that the craft beer craze slowly engulfing Europe in recent years has filtered into South America as well. On every step of our journey there was no shortage of independent cerveza artesanal outfits to satisfy our beery needs.

An Argentinian beer label Patagonia produces craft beer en masse. While it will set you back three times the price of a standard lager in supermarkets, it’s worth trying at least once. On our last night in Buenos Aires we treated ourselves to a bottle of Patagonia 24/7, a brew that was created as a limited edition for a festival, but proved so popular they added it to their national lines.

Everywhere we travelled there was always a regional flagship lager, too: Brahma and Itaipava in Brazil, Huari and Paceña in Bolivia, Escudo and Kunstmann in Chile, Pilsen in Paraguay, and Quilmes and Schneider in Argentina to name a few. One of our favourites takes us back to the beginning of the journey in Peru, where we drank oodles the smooth amber lager Cusqueña.

Made from a Peruvian variety of purple corn, this sweet drink can be found across the country and is a staple in any menú restaurant. We first experienced it in Punto Azul, Lima, a restaurant that serves extremely good ceviche, recommended to us by a friend who lives in Peru.

Like many drinks in South America, this is also available in an alcoholic form (known simply as ‘Chicha’).

If you’ve been to Argentina or Uruguay you will know mate (pronounced MAT-TAY). If you’re going, you won’t miss it. It is a form of tea made from yerba mate. Argentinians and Uruguayans love this drink so much that they carry round hot water flasks and the traditional, open-top tea cups with metal straws to drink it from throughout the day.

This can be a really bitter drink. It is essentially a really, really strong green tea. Luckily, the bitterness can be negated by mixing the mate with some chamomile or sweetener to tone down the flavour.

One thing we really enjoyed about mate is that it is a social drink. The tea cup is filled and passed around by friends when they get together, or by a family around a dinner table. For a complete lowdown on the etiquette and customs of the drink, take a look at this excellent guide to how to drink maté.

If your hostel serves breakfast, you will probably see a plate of dried coca leaves by the tea and coffee. Pop a couple in a cup and add some hot water for a refreshing hot drink.

This is usually served when you’re at high altitude, as the locals use coca to cope with the dizzying effect. It doesn’t have a particularly strong flavour but it was a life saver when we hiked the Inca Trail. Don’t be tempted to bring a bag home – you probably won’t get it through customs.

It will be hard to miss this bright yellow Peruvian soft drink. It lines the shelves of any shop ahead of any other famous fizzy drink. Still, it’s made by Coca-Cola so it’s not like the locals are profiting from its national identity.

It has a familiar taste. You expect it to be like Mountain Dew but it tastes like Iron Brew (unfortunately, if you haven’t been to Scotland you probably don’t have a comparison). Either way, try it. You can get diet varieties if you’re lucky.

And there you have it: our 15 must try drinks in South America. Did you visit and find something different? Add it in the comments below. We’ll definitely be heading back so we’ll make sure to try it out.

If you’re looking for inspiration for your South America travel planning, check out our itineraries and travel guides for Peru, Bolivia, Chile and Patagonia. 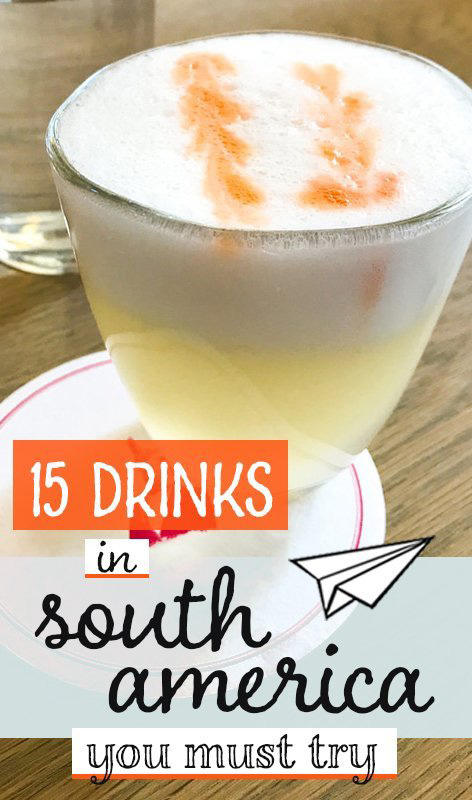