Things to do in Savannakhet: a two-day itinerary

When we planned our itinerary for Laos, Savannakhet never figured in our thinking. It doesn’t appear in Google searches for things to do in the country. It requires a detour from the standard backpacking route. It doesn’t really have a nightlife scene to speak of. For all these reasons, travellers often pass it by. But on our chance visit, we found some really fun and interesting things to do in Savannakhet.

This site contains links to travel insurance services we recommend, from which we may make commission at no extra cost to you.

A detour to Savannakhet from the backpacker trail

In the end we visited Savannakhet, or ‘Savan’ as it is known locally, by circumstance. While in Kong Lor village, we realised the journey down to 4000 Islands in a single day would be a gruelling one. After consulting the map and doing a little research, we decided that a two-night stop-off in Savannakhet would break it up perfectly.

Savannakhet is located on the eastern bank of the Mekong River next to the Thai border, distinguished by crumbling French colonial buildings that line the streets of its historic centre.

We didn’t have huge expectations, but Savannakhet turned out to be one of our favourite places in Laos. We loved it so much we extended our stay by an extra night.

Things to do in Savannakhet: a cycling adventure

Savannakhet is Laos’ second-largest city after Vientiane, with a population of around 120,000. The sights and activities are widely spread and would be laborious to access on foot. We turned to our favourite form of travel transport: the bicycle. (Check out our article about cycling to the sights in Chiang Rai, Thailand.)

You can hire a bicycle in Savannakhet for as little as 20,000 kip per day, and it’s a great way to get around, especially if you’re like us and can’t ride a moped.

We hired our bicycles from a small shop opposite Leena Guest House on Chao Kim Road. The owner was a charming old man who served us with a smile, didn’t ask for a deposit and was flexible about when we could return the bikes.

In this article we explain how we did our self-guided two-day cycling exploration of Savannakhet and nearby sites, including Bungva Lake and the historic temple of That Ing Hang, basing ourselves from a guest house in Savannakhet. But if you’re cautious about doing it on your own, it’s also possible to take a guided cycling tour.

These are a couple of options for one or two days:

Day one: exploring the city

We focused our first day of cycling around the central city streets. Before we got going, we stopped off at Lin’s Café on the night market square, which provides useful tourist information as well as a great cup of coconut coffee.

10am: cycle along the river to Phonsavanh Temple (3.5km)

After collecting our bicycles we headed south along the Mekong riverfront, stopping to take photos of the tranquil scenery and occasional busy market stalls.

Eventually we turned inland and reached Phonsavanh Temple, a graceful building contained within a lush park area and surrounded by smaller structures. We spent a good half hour walking around the grounds, and saying hello to a group of monks who were gathered there.

Heading back towards the city centre we passed several more picturesque temples with various origins – the city has been home to Chinese and Vietnamese settlements in the past. After catching a view of St Teresa’s Catholic Church by the night market, we stopped for lunch and took a break from the afternoon heat for a couple of hours.

In mid-afternoon we headed north along the river to the Old Stadium, which has been converted into a park. When we visited it looked like it had been renovated recently, with winding walkways and pretty flower arrangements. Nearby we found our way to the sprawling local markets by the main bus station and stopped for a browse.

To round the day off, we went back towards the centre to try out the Dinosaur Museum. After reading mixed reviews we weren’t sure what to expect, but had a pleasant surprise. We arrived at about half past four and appeared to have missed the boat – it closed at four! But one of the museum’s experts was happy to re-open the doors and give us a personal guided tour. The entrance fee was 20,000 kip each.

The museum only had two small rooms, but there were plenty of ancient dinosaur relics to see. Our guide even produced pieces of bone from drawers and allowed us to hold them. Our visit only lasted 15 minutes or so, but was well worth the meagre entrance fee of 20,000 kip each.

Satisfied with our day’s sightseeing, we took the bicycles 500m back to our guest house and went out for some dinner. The place we stayed at was Joli Guesthouse, which we are sad to discover has since closed down during the pandemic. But you can find more local guest houses in Savannakhet on booking.com.

Total distance cycled on day one: 8km (give or take a few hundred metres for detours)

We rose early on the second day with plans to venture further afield. After wolfing down a hearty breakfast, we set off towards Bungva Lake, a few kilometres north of the city centre.

After passing by a monument and a few small villages we reached the lake’s edge and were met by a beautiful view out across the water, with buffaloes grazing and a solitary canoe gliding peacefully along. All around the lake farmers toiled in rolling green fields.

As we cycled around the lake we passed stilted restaurants in the water which were unfortunately a few hours away from opening. It would have been a perfect setting for lunch with a cold beer.

We continued north for seven or eight kilometres to That Ing Hang, a 16th-century stupa. We made a small donation to enter the grounds, and Lisa hired a sarong to cover her shoulders. We usually dress in suitable temple attire in this part of the world, but the sun was just too hot for it this time!

The grounds were encircled by majestic walls, the inside of which were lined with golden buddha statues. Monks gathered for a blessing ceremony as we walked around the inner perimeter. In the middle the stupa itself looked magnificent, its carvings still showing through on the ageing stone.

The ride back to the city took a couple of hours, getting us back in time for lunch. Afterwards we took a lengthy afternoon break, with the temperature even hotter than the previous day.

4pm: a final excursion before returning the bicycles (1km)

With sunset approaching we rode out again for a final exploration, heading for the night market. It was a fairly quiet evening – just a handful of vendors were out selling street food. We locked the bikes up and walked down to the riverfront, taking some photos of the decaying colonial buildings. The colourful old architecture looked particularly beautiful in the low light of early evening.

Total distance cycled on day two: 31km (give or take a few hundred metres for detours)

How to get to Savannakhet

Before you can enjoy Savannakhet you need to get there, which can be tricky. While the city does have an airport, it’s rarely used by backpackers – the typical way in and out is by bus. Services run every day from Vientiane in the north and Pakse in the south.

Taking pubic transport in Laos can be an adventure in itself. Check out my article about getting around Laos, which charts our experiences with it as we travelled through the country, including how we got in and out of Savannakhet.

Where to stay in Savannakhet

There isn’t a huge choice of hostels in Savannakhet, but guest houses are plentiful and cheap. We found a lovely local guest house through booking.com, and it was one of our best travel accommodations to date.

For 100,000 kip per night we had a spacious double room with a private en-suite bathroom, and a communal balcony area outside. A free daily breakfast of eggs, bread, jam, bananas and coffee was included.

To find more great value accommodation in Savannakhet, check out the map below:


Things to do in Savannakhet: try some local food!

One of the highlights of Savannakhet is its variety of cafés and restaurants. We tried some of the local cuisine, as well as some popular Indian and Japanese places.

Check out my full article on five great places to eat in Savannakhet.

For more inspiration on planning your time in Laos, try more of our articles: 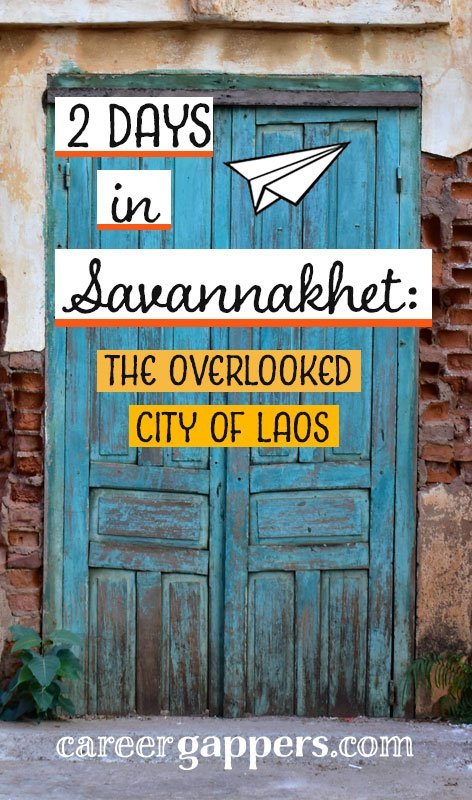 3 thoughts on “Things to do in Savannakhet: a two-day itinerary”