Poker in Vietnam: my search for a game in Ho Chi Minh City

Poker is illegal in Vietnam – that is, if you are a local resident. For a country with some of the world’s toughest anti-gambling laws, it’s an incredibly popular game. I attempted to check out the underground scene by hunting for a poker game in Ho Chi Minh City.

Travelling comes with many sacrifices. Most will agree that the biggest one is missing your loved ones for a long period of time. Then there are the home comforts; as a Brit, I’ve been craving a good Sunday roast with Yorkshire pudding.

Hobbies are another biggie. As a casual musician, I’ve had to pretty much give up playing the guitar and piano for the last year. I also love playing poker. However, as it’s a time-consuming game, and illegal in many of the countries we’ve visited, I’ve had to give that up, too. Well, with a couple of exceptions.

When we set off last June, I said to Lisa that there were two places I wanted to experience a poker game: Brazil and Vietnam. The scene is reputedly huge in both countries. Last year the city of Foz do Iguaçu hosted the first Brazil Series of Poker.

The first part of my mission was fairly easy. Poker is a growing and – importantly – legal pastime in Brazil, and so it didn’t take long for me to find a local game in São Paulo. Vietnam, on the other hand, was a different kettle of fish.

There are several famous Vietnamese-American figures in world poker. There is Men ‘The Master’ Nguyen, one of the leading winners of World Series of Poker (WSOP) bracelets with seven, and a four-time winner of the Card Player Magazine player of the year award. There is also Scotty Nguyen, winner of the 1998 WSOP Main Event – the world’s biggest poker tournament. The final hand was one of the most famous in poker history, when Scotty declared “You call, it’s gonna be all over baby!”. His opponent called incorrectly, and Scotty won.

More recently there is Qui Nguyen, the surprise winner of the WSOP Main Event in 2016. As a recreational player at the time, he overcame a final table of professionals to scoop the game’s biggest crown.

With poker evidently popular among people with Vietnamese heritage living in the USA (Men and Scotty Nguyen’s success came at a time when Americans dominated world poker), I assumed the game must be widely accessible in Vietnam. I was in for a surprise.

It is against the law in Vietnam for local residents to play poker. In fact, the only form of gambling legal in the country is the national lottery or betting at a single horse-racing track in Ho Chi Minh City.

Interestingly, gambling laws in neighbouring Cambodia are strikingly similar. It’s rumoured that – hilariously – to get around this, Cambodians cross the border to gamble in Vietnamese casinos, and vice versa.

Despite the laws, however, Ho Chi Minh City is home to a handful of casinos that run poker games. One of the targets is foreign nationals, for whom it is legal to play, but I found that the vast majority of participants were Vietnamese.

This may be due to relaxed application of the laws at lower stakes. The reprimand for small-stakes poker tends to be a small fine. If the approach to late-night alcohol sales (also illegal) is anything to go by, it’s possible that the casinos pay bribes to police to keep the games open.

The consequences for individuals only become truly serious when winnings exceed 50 million dong (around GBP 1,600), which incurs a minimum of three years’ imprisonment plus a large fine. This means that a lot of the poker tournaments available are small to medium stakes, which was perfect for a recreational player like myself.

Knowing that tournaments exist in Ho Chi Minh City is one thing; finding them is another. I turned to the obvious primary resource, Google, and soon encountered a useful site called www.pokerdiscover.com. This listed various casinos in Vietnam with poker games, and included links to their sites for further information.

The casinos’ websites were usually just Facebook pages, and the information wasn’t always in English. After looking at a couple of them, though, something caught my eye. One name kept appearing in the customer reviews, and it sounded English. A week before we entered Vietnam, I decided to send this guy a message.

To my surprise, he was quick to respond and very happy to help. I told him I was looking for a low-to-mid-stakes tournament, and he obliged with a list of possible options in the city, and even offered to help with any Vietnamese translations.

The first one I checked out was Victorious Poker Club. The tournament schedule at this place was perfect. Two days after we were due to arrive in Ho Chi Minh City, they were running a tournament with a 550,000 dong entry fee (a little less than 20 pounds sterling), with a guaranteed first-place prize of 20 million dong (about 650 pounds sterling).

The next important factor was location. If I was going to put myself in a position in which I might win that much money in cash, it would need to be in a safe area and not too far from where we were staying, or at least a reputable taxi rank. I looked it up, and lo and behold, it was 2 minutes’ walk away from our hostel! Bingo. Or, should I say, poker.

Getting ready to play some poker

As the tournament approached, I chatted once again with the guy on Facebook, and he gave me some advice. “Don’t be shy to call out players if you think there’s soft play or too much speech in Vietnamese,” he said. “And bring some ID.” All that was left was to withdraw some cash and head to the poker club.

I arrived good and early at 12:30 ish; the main tournament was due to begin at 2pm. In order to enter the club I needed to become a member, which is standard in poker rooms around the world. This cost 100,000 dong, and I just needed to show my driving license. The woman on the door told me that a freeroll (a tournament with free entry and a prize pool provided by the casino) that had begun at 11am was still running, and I was welcome to enter. I went ahead.

The club had a policy that upon buying into tournaments for the day, it was mandatory to purchase 200,000 dong worth of poker chips to use for tipping staff and buying drinks. I obliged and sat down at my table for the freeroll. In the first hand I was dealt two queens. Was it going to be one of those days?

I had expected that the freeroll would be structured to finish comfortably before the day’s main tournament, but as the clock neared 2pm I realised it was going to overlap significantly, and I had amassed quite a sizeable chip stack. Not wanting to miss the start of the main tournament, I started splashing chips about recklessly, and managed to bust out just in time. It had been nice to get a bit of practice in with the local players first.

The style and standard of poker in the club was quite an eye-opener for me. I was one of only two westerners in the room – the rest were Vietnamese. Prior to this, my only reference for the Vietnamese poker style had come from watching coverage of the WSOP on television.

The American coverage of the WSOP Main Event often focuses on the most eccentric and unconventional players in the field, and this tends to be amplified when it comes to Asian poker players. As a result, many of the Vietnamese players I’ve seen over the years have been those with an aggressive or outlandish style.

Take, for example, a ridiculous hand involving Henry Van Tran, a Vietnamese-Canadian player, at the 2012 WSOP Main Event. In the hand, Van Tran raises and re-raises with 2-3 off-suit pre flop – one of the worst starting hands in poker – and makes a seemingly questionable call with bottom pair on the river.

Another example is Kenny ‘Sick Call’ Tran, a player of Vietnamese origin famed for making unorthodox ‘hero’ calls with suboptimal holdings. The players I mentioned above – Men, Scotty and Qui Nguyen – are also known for their flamboyant personalities and/or dress sense. Of course, these type of players make for great television, but they are not necessarily representative of the whole.

Against this backdrop, I was half expecting to be playing against a total bunch of maniacs. That’s not how it turned out. While there were plenty of irregular plays during the day, the general standard was higher than I had experienced in UK poker rooms. That made the experience even more fun and fascinating.

What happened in the tournament

I played a patient game, and with luck on my side I began to amass a decent chip stack. The table talk was all in Vietnamese of course, which was a little unhinging at times, but the players were welcoming. I knocked quite a few players out of the tournament, which I feared would get some backs up, but it was always taken with a laugh and a handshake.

As time progressed, things continued to go my way. There had been well over 100 entries into the tournament, and the top 10 places paid prize money. With 30 left I was still among the chip leaders.

With 18 players left, on the last two tables, I started bleeding chips a bit, and a cash finish began to look doubtful. The Vietnamese players left were mostly very good, and I was put to some difficult decisions. Luckily for me, though, I made the final table, squeezed into the money and finished in 10th place for 1,900,000 dong. It’s not every day you win over a million at poker! It would’ve been nice to ladder up into the bigger money, but I was more than happy with the day’s play after a long absence from the game.

Throughout the day I was made to feel welcome by the local players. There wasn’t too much English spoken, but plenty of smiles and friendly gestures. I collected my winnings, left the building, dashed to the hostel and headed out to join Lisa. She’d been at the Heineken Experience with our friend Nick, and they had a beer ready for me.

Other than my live poker experiences in Brazil and Vietnam, the only way I’ve been able to keep up with the game while travelling has been by listening to podcasts. By far my favourite is The Breakdown by the Poker Guys.

Twice a week Grant Denison and Jonathan Levy – two poker pros from Portland, USA – choose an interesting poker hand suggested by their followers and provide in-depth analysis, intermitted with bursts of comedy. If you’re a poker enthusiast of any level I would highly recommend checking these guys out: follow them on Twitter here.

Do you have an experience of playing poker in an interesting place while travelling? Let me know about it in the comments section below. 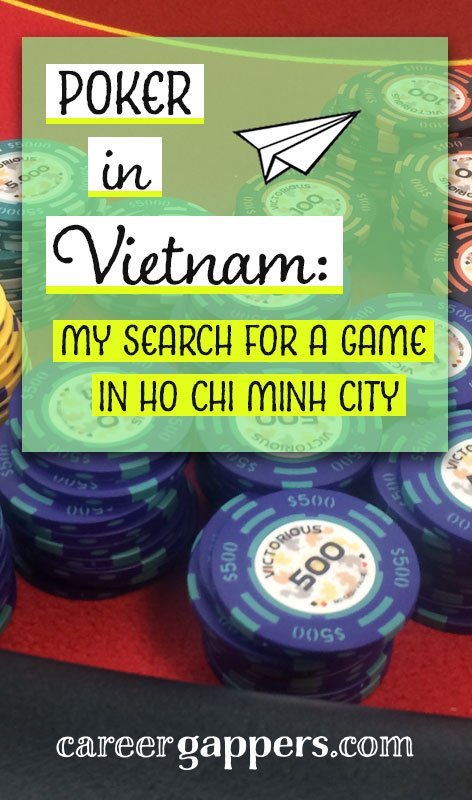