Things to do in Chiang Rai: a two-day cycling itinerary

There are so many things to do in Chiang Rai, but not everything is within walking distance. Cycling is a fun, easy, cheap and fairly safe way to get around the attractions, and it seems to be very often overlooked.

Most people opt for hiring a scooter, but if you’re like me and have never used one before you might not be all that confident in riding one, especially when you’re expected to hand your passport over as collateral.

Another way to tick off the list of things to do in Chiang Rai is to pay around 1,000 baht for a tour. This involves zipping around nine different attractions in a single day, including Wat Rong Khun, or the ‘White Temple’.

Neither scooters nor tours suited what we wanted to do, so we decided that hiring bicycles for two days was the perfect option. We could pick and choose what we saw and the time we spent at each location.

The four main destinations we cycled to were: Wat Rong Sear Tean (Blue Temple), Wat Huai Pla Kung (Big Buddha), Wat Rong Khun (White Temple) and Singha Park. Below I’ve outlined our itinerary, including distances and times, to give you an idea of what is possible.

We took it at a really slow pace, simply because we were in no hurry. It would be possible to cycle to all these attractions on the same day, or to add extra places nearby. We completed these cycles in March 2018, when the average temperature was 30 degrees, but we didn’t find this to be a problem.

Where to stay in Chiang Rai

We stayed at Mercy Hostel in Chiang Rai, and this itinerary is based on starting and finishing there. However, it would be just as easy from any centrally located accommodation in the city.

We had a great experience at this hostel, which is large and has excellent facilities and services. Bicycles are available to hire on site, and there’s a fantastic social space with a kitchen, lots of tables and chairs, and an outdoor pool. We were able to book other services through the hostel as well, like our slow boat to Luang Prabang in Laos.

For other accommodation options in Chiang Rai, take a look on booking.com.

Mercy Hostel is in the centre of Chiang Rai, a few hundred metres from the clock tower. This was a good base for exploring the surrounding area, and we could also rent bicycles for 60 baht each per day.

The cycle to the Blue Temple was on paved roads with a medium amount of traffic. There were no uphill sections except for going over the bridge.

The Blue Temple is a recent addition to Chiang Rai – completed in 2016 – and it was absolutely worth the visit. It has already been added to the day tour schedule, but if you spend a while there you can experience it with a little serenity between bus arrivals.

We grabbed a delicious noodle soup at one of the street stalls at the temple, and then spent over an hour admiring the artwork and taking photos. This temple is free to enter, which makes it even better for the budget backpacker!

2pm: leave the Blue Temple and cycle to the Big Buddha (6km)

We were actually aiming for Chiang Rai Beach, but spotted the Big Buddha statue in the distance and cycled for it. The roads were all paved and there was only a slight bit of uphill near the temple.

Like the Blue Temple, this one is a new addition to the list of things to do Chiang Rai, and it isn’t part of the day tours yet. They were still constructing the stairs to the giant statue. Even so, it was an absolutely amazing sight.

We walked up to the top of the temple, which was free to enter and provided great views of the surrounding area. We spent about an hour here taking plenty of photos and scaling the stairs for the view from the top. Some small tour buses came and went but there were not too many people, which made it a calming visit.

We ended up at Wat Mung Muang after heading back towards Chiang Rai town, but this could have easily been any of the other temples in town. Again, the ride was fairly flat, and there was a medium amount of traffic on paved roads.

We cycled around the market nearby and headed back to our hostel.

All in all this was a great afternoon, and I would highly recommend this route to anyone with a bicycle. It is an easy cycle, and the route along the river made for some great views.

Total distance cycled on day one: 17 km (give or take a few hundred metres for detours)

Ideas for additional sites: We passed fairly close to the Buddha Caves and Chiang Rai Beach, which would be an easy addition to make this a day-long cycle.

Slightly longer than the previous day, this section took about an hour on paved roads with medium traffic. The route was fairly flat, so no steep hills to worry about.

11am: arrive at Wat Rong Khun

As one of the most popular things to do in Chiang Rai, the first thing you will notice about the White Temple is the volume of tourists. This was very different to the Blue Temple and Big Buddha.

We cooled off with a frozen smoothie and waited for an opening between the busloads before paying our 50 baht admission fee. The temple itself was absolutely beautiful on the outside. Inside it was somewhat plain, but that’s not what you go to see.

Instead of heading for the tourist-heavy food court across the road, we chose a nearby local café for a delicious lunch of chicken, pork and rice.

The ride to Singha Park was mainly flat, again with medium traffic. It’s a really straightforward route, and you bypass more temples if you want to stop for a look around.

The locals were so friendly in the north of Thailand. When we were cycling, people shouted hello and stopped to check we were alright and knew where we were going.

Arriving at Singha Park you will notice the famous golden lion and a few cafés. This park is absolutely huge and to take advantage of the ground you need to cycle to get around. Luckily for us we already had our bikes so we didn’t need to pay extra to rent one there.

There were brilliant cycle paths all the way around the park, winding past the lakes and through the tea fields. A good thing about cycling round is that there were next to no tourists. The tour buses that stop here pack people onto trams for a guided tour, using the roads and staying clear of the cycle paths.

Heading back is easy as it is one long, fairly flat road, with the usual medium traffic.

Exploring these two great sites on our bicycles meant that we could take the time to stop and enjoy them. Of all the things to do in Chiang Rai, hiring a bicycle was the best decision we made.

Total distance cycled on day two: 32.8 (plus around 10km cycling around the park)

Ideas for additional sites: You will pass many other temples, so if you have time you can stop to look around. If you’re an avid biker and fancy going a bit further, the Khun Korn waterfall is another 10km from Singha Park.

Additional information for getting around Chiang Rai on a bicycle

Is Chiang Mai your next stop after Chiang Rai? Read about our trekking adventure off the beaten path in the jungle. 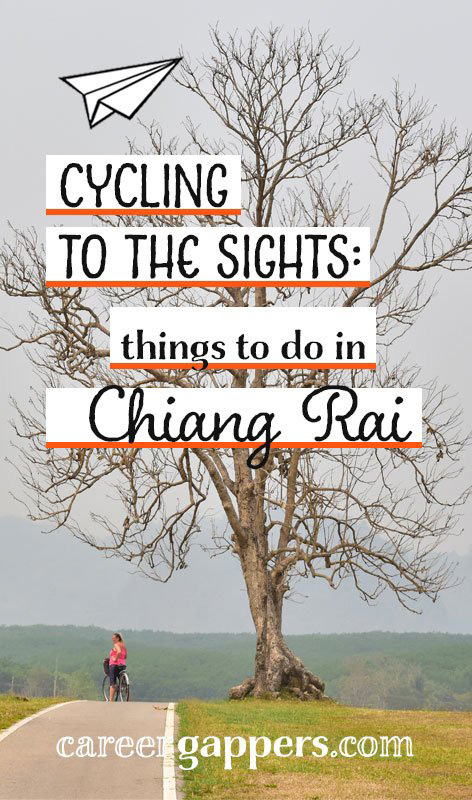 One thought on “Things to do in Chiang Rai: a two-day cycling itinerary”