It was a typically sleepy evening in Luang Prabang, and it happened to be my 35th birthday. We were looking for somewhere to eat and celebrate with a quiet beer or three when we found Lao Friend Bar, a local business with a sad yet inspiring story.

Luang Prabang is the main city and transport hub of northern Laos. Its relaxed social vibe has endeared it to western travellers in recent years. Standing on the curves of the Mekong, people pass through it in their thousands to take boat rides on the river, visit the nearby cultural sites, and wind down with a Beerlao in one of the many local bars.

The sun was setting as we headed for Utopia, the city’s most renowned backpackers’ bar. We were looking for a pre-dinner drink in one of its comfy chill-out areas overlooking the river. On our way in, we were stopped in our tracks: a woman in a t-shirt reading Lao Friend Bar handed us a flyer. It said:

We are two guys and we have just created our bar.

We come from a small village in the north of Laos. We want to help our people.

Our family and friends are still there and we want to help them to rebuild the village bridge and school.

When you spend a good time with us drinking a beer … you help us! So thank you!

Our interest was piqued. The flyer didn’t say what had happened to the village, or why the bridge and school needed to be rebuilt. It sounded like a cause we would like to support, though, so we decided to try it for dinner (they served food as well).

We went ahead with our planned drink in Utopia, went back to Lao Friend Bar and took a seat outside. Immediately, a bubbly young man came over to us with a menu and a smile. This was Akeo, one of the ‘two guys’ referred to in the leaflet. He seemed to be running the place.

I wanted to start asking him questions straight away, but first we ordered food to get the feel of the place. Lisa went for chicken with cashew nuts, I for chicken with ginger, and we ordered a Lao salad to share. Beers too, of course – they sold the local brand Namkhong, a tasty cheaper alternative to the omnipresent Beerlao.

The prices were reasonable by the city’s standards – not the very cheapest, but it certainly wouldn’t break the bank. Main dishes were about 20,000 – 30,000 kip.

As our food was served, the place was empty except for another couple sitting close by. People kept drifting past into Utopia, a few of them stopping briefly to look at the leaflet.

The food was delicious. We’d only been in the country a couple of days, but it was easily the best Lao cuisine we had yet tasted. After a few minutes Akeo came over to check if we were happy with it. Whenever a restaurant makes the effort to do this, the food is always good. Akeo really cared about our experience.

After dinner we decided to stay for a while. We had left our playing cards at the hostel, so I nipped back to get them. When I returned, Lisa had been joined by our new travelling friends, Neil and Anna from Ireland, and Rick and Steffi, two young solo backpackers from Germany. The other couple in the bar had also come over to the table. They were Dave and Emily from Blackburn, travelling Brits like us.

The beers flowed and Akeo came over to join in. We took the chance to ask about Lao Friend Bar and the troubled village. He was happy to talk about it.

“We are from the village of Vieng Kham,” he explained. “The village was flooded and everything was damaged.”

Akeo told us that half of everything we spent in Lao Friend Bar would go back to the village to help them rebuild the school and the bridge.

I wanted to know more. “How did you manage to come to Luang Prabang and set up the bar?”

Akeo explained that he first came to the city to study, and worked in a bar while he completed his degree. He learned quickly and eventually set up his own bar. But when catastrophe struck and the village was flooded, he had to close it. Now, Lao Friend Bar has been reopened with a new purpose.

We carried on enjoying the evening. A while later, Akeo came over again. He had a gift for me! Lisa had mentioned that it was my birthday. Akeo placed on the table in front of me a bottle of Beerlao dark – the premium blend – with a candle on top. How thoughtful.

This was my kind of birthday. We stayed for a couple more, settled the bill and then grabbed a tuk-tuk to Luang Prabang’s famous late-night bowling alley.

The next day we went back to Lao Friend Bar again. It’s rare for us to eat in the same place twice on our travels, mainly because we like to try as many as possible. But if anywhere warranted a repeat visit, it was here. Akeo was pleased to see us.

This time we had a noodle soup and another Lao salad. The standard was just as high as the previous night. We had another good chat with Akeo after finishing and headed back for an early night.

Travelling has taught us many lessons, and one of the unfortunate ones is to be suspicious and question everything. Some people might read this and suspect that the village flood story was fabricated to generate custom. I have no way to verify it, as such news is common in Laos and not widely reported. There are lots of villages in the country that share the same name.

Sometimes, however, you just have to use judgement of character. Akeo came across as one of the most genuine and committed people we’d encountered. There was no obligation for him to pay such attentive care to our experience, or to join in with our table chat. There was certainly no obligation for him to give me a free birthday beer. I am convinced that the story was for real.

Whatever the case, we had a great time at Lao Friend Bar. My thanks go to Akeo and the team for giving me a birthday to remember. I would love to go back one day and find out how things are progressing in the village.

2022 update: we heard that Lao Friend Bar has sadly closed permanently. But we wanted to keep this story published to maintain the memory of this initiative. Akeo – if you’re out there – we’d love to hear from you and how things are going now. 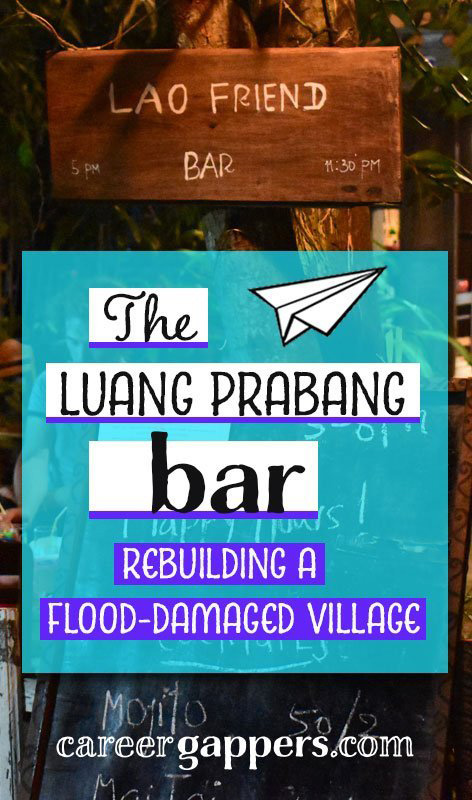