Northern Thailand is full of natural beauty, but is becoming tricky to explore away from the growing tourist crowds. The city of Chiang Mai is the region’s focal point for guided excursions into the jungle. With a bit of digging, we found there are still ways to experience the Chiang Mai trekking scene away from the beaten track.

If you’re looking for somewhere fun to stay before your trek, take a look at this guide to the best party hostels in Chiang Mai.

We took a two-day tour with Chang-over Trekking and its appropriately named host, Good Tourguide, together with his ‘brother from another mother’, Mr Whisky.

The guys promised to take us away from the typical routes, with an overnight stay at a lodge in a secluded mountain village. It sounded like we were in for an interesting ride!

We signed up for the adventure and packed our bags.

Off to a bumpy start

Our tour group was a small one; joining me and Lisa were two nice British guys, Dixie and Chris.

Good arrived to pick us up slightly later than planned (‘Thai time’), but made up for it with a feisty jeep drive out to our starting point. We stopped on the way to put our rucksacks into storage, buy a few snacks and collect the legendary Mr Whisky.

Then we went off-road for the drive up to the village. There could be no preparation for the ride that ensued. Dust spouted up in huge clouds behind the jeep as we tore up the bumpy path, the four of us in the back clinging to whatever we could. This was off-the-scale absurd, but also a little bit awesome. Just as long as we didn’t look down…

About halfway up, one of the seats in the back broke off, leaving me and Dixie confined to the floor. By the time we pulled up at the lodge I had turned a pale shade of white, but it wasn’t possible to see that under the coat of dust covering me. “We’re here!” Good informed us, unfazed and grinning – he’d clearly done this a lot.

Lunch was waiting for us, but more importantly we needed a beer after that journey. Thankfully the family running the lodge had bottles of Chang ready and chilled. An hour later, we were ready to start trekking.

Chiang Mai trekking part one: a tale of two waterfalls

Mr Whisky gave us each a long bamboo pole to use as a walking stick. They could also come in handy to fend off snakes – king cobras had been known to show up in these parts. “Has anyone ever been bitten by a snake on one of your tours?” I asked Good that evening. Yes, they had, but only twice in 12 years, and they weren’t serious. I was okay with those odds.

Off we went. Mr Whisky led the way, machete in one hand and swigging bottle in the other. He was clearly a seasoned pro – we were in good hands. Good stayed back to pick us up at the end.

Our first day’s trekking followed an unmarked track, but it was a local route that Mr Whisky knew well. After an hour of walking, hacking, scrambling, and appreciating the breathtaking scenery, we reached our first point of interest – a beautiful secluded waterfall. Drenched in heat and sweat I couldn’t wait to get into the pool, but my word, it was cold! Eventually we all got in for a refreshing splash around.

Soon we moved on, and after covering about the same distance again, we came to another waterfall. This time the rocks were more slippery, the water deeper and the current a little stronger, but it was still safe for a dip. Rinse and repeat.

There hadn’t been any other people at either of the waterfalls, in fact we didn’t see another tourist the whole day. It was almost as though we had the jungle to ourselves. This is the beauty of taking a tour off the beaten track with good, knowledgeable local guides.

Nicely cooled off once more, we trekked on to a small village where we waited for Good to pick us up. We took the chance to sit and rest while some kids screeched around on bicycles, and a couple of pigs trotted past. Before too long Good rocked up in the jeep, and we were done with physical exertion for the day.

Sunset in the jungle

Back at the lodge we took showers (cold ones – no hot water in the middle of nowhere) and kicked back with some more beers. Good appeared with a guitar in hand. “Come – sunset!”

Beers in hand, we walked a short way up a hill to a spot with a glorious view around the mountains and valleys. Good cut off some giant leaves for us to use as seats. There we stayed for an hour or so while the sun dropped behind the horizon, burning redder and seeming larger as it fell. Good rattled out a few tunes on the guitar.

I can’t remember a time when I’ve felt more peaceful and cut off from the world than this. It was pretty magical.

With night creeping overhead we went back down to the lodge, opened more beers and gathered in the kitchen. Good had already prepared ingredients and was working away at the wok.

He passed round a tray of chillies in case we dared sample them, while each of us took a turn at Thai cooking. The main dish was yellow curry, with vegetable stir fry as accompaniment. Soon it was ready and we sat around the lodge’s wooden table to eat.

After dinner Good lit a campfire, and the Changs kept flowing well into the night. We became accustomed to his favourite catchphrase. “Why nooooooot?”

The beds in the lodge were basic but comfortable, with plenty of blankets, and surrounded by mosquito nets. We were all thankful not to have an early rise, but it was a struggle when the time came to get up.

The plan for day two had been to hike to a summit from where we would be able to see all over the surrounding region. But as we looked up towards the hill, it disappeared away from view in a cloud of hanging haze. This was apparently the blown-over residue of giant forest fires in Myanmar.

The haze meant the hike would be a bit pointless, as we wouldn’t be able to see anything at the top. So Good reverted to plan B. We would go waterfall-hunting again, visit an elephant sanctuary, and finish with a spot of river tubing.

We set off in tow of Mr Whisky once again as he led us confidently into the thickets of jungle. The route was a bit longer than the day before, but eventually we arrived at the falls. Water cascaded down from high rocky cliffs into a scenic blue-green pool. It was the best of the three waterfalls, and – as we soon found out – also the coldest.

After another dip, a short break and more beers (a stall was on hand selling them), we set off along the water bank. After criss-crossing along the stream, encountering a couple of water snakes, we eventually arrived at the elephant sanctuary.

This was the first time I had ever seen an elephant up close. These creatures are bizarre and amazing. So huge, plodding and doleful.

One of the keepers brought out a giant bucket of fruit, and the two elephants eagerly stretched out their trunks for us to feed them. After the feeding session, a keeper took us over the road with the female elephant to a deeper section of river. He led the giant beast into the water and beckoned us to follow, handing around buckets so we could help wash her.

We were pleased to see this was a modern, sustainable sanctuary that treated the animals well and did not permit elephant riding. Check out this article about another ethical elephant experience, and why it’s so important to support sustainable practices. If you’re interested in more experiences that support rescued elephants while you’re in Thailand, also read about the Hutsadin Elephant Foundation to the south-west of Bangkok.

Finally it was time for tubing. For those unaware, this basically involves lying in a giant rubber ring and floating along the river. Good picked us up again in the jeep, and a few minutes’ drive later we arrived at the entry point.

Dixie and Chris took a single tube each, and Lisa and I a double tube. My expectations for a gentle drift down the river were soon turned upside down. This was white-water rapid material. We dodged rocks, hit them, got stuck in them, occasionally overturning. It was almost like being back in the jeep the day before.

We emerged a kilometre or so downstream, soaked, battered and smiling. A fitting way to end our Chiang Mai trekking adventure! What an amazing and eventful couple of days it had been. We got back in the jeep and headed back to the city. Mr Whisky handed around the swigging bottle one last time – because why nooooot? 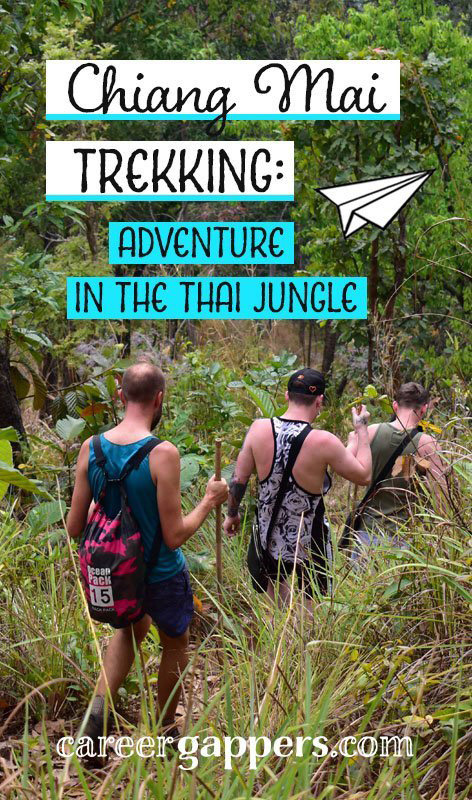 20 thoughts on “Chiang Mai trekking: adventure in the Thai jungle”