Getting around Laos: a guide for first-time visitors

The transport system in Laos is part of the travel experience and takes some getting used to. While we often didn’t find getting around Laos was always easy, nobody was out to rip us off (well, with one exception, which we explain below), and the people were always friendly. Travelling through Laos is hectic and unpredictable for a ‘falang’ (foreigner) but it can be fun, as long as you are patient and know what to expect.

This story recounts the experience of our journey from Luang Prabang in the north to the southern border with Cambodia, and the various different types of transport we used along the way. Hopefully reading this will prepare you for some of the challenges you may encounter when navigating transport in Laos.

Luang Prabang to Vang Vieng to Vientiane: the easy part

The first leg of our Laos travels followed the typical tourist route from the sleepy city of Luang Prabang through to the capital, Vientiane. This was where we found the least issues, as transfers were well established for backpackers.

If you’re travelling into Luang Prabang from northern Thailand, you might want to read my article about taking the slow boat, which was one of our most memorable journeys.

From Luang Prabang we booked a minivan transfer to Vang Vieng via our hostel (Downtown Backpackers) for 120,000 kip each. We were picked up punctually at our hostel, and the van journey took about five hours, stopping a couple of times for toilet breaks. One of the stops had a spectacular view over the countryside hills and fields.

We arrived in Vang Vieng five minutes’ walk from our hostel – the drop-off was central and it’s not a particularly big place. Most of the hostels were within the same compact area.

We booked our trip on to Vientiane through our hostel again (Nana Backpackers). This time it was just 50,000 kip each. We were collected from the hostel, but this time taken to a bus station a few minutes away where we transferred onto a large bus, with comfy seats and plenty of leg room.

The bus ride to Vientiane took another five hours or so, and again we were dropped off a short walk from our hostel. So far so good.

In Vientiane we had our first experience with a Lao local bus. We decided to take this option to get to Buddha Park, after discovering it would cost considerably less than booking a minivan through our hostel. We paid just 6,000 kip each way.

When we arrived at the bus station, a tuk-tuk driver approached us and asked where we were going. “We’re taking the bus to Buddha Park,” I replied. “Next bus is at 11:30am,” he said. “I can take you!” I checked the time – it was only 10am. Thankfully we’d already looked up that the number 14 bus went every 20 minutes.

The bus was a smooth ride but took a fair long while – 45 minutes there, and about an hour and a quarter back because we stopped for the driver to have some lunch (!). Thankfully we weren’t in a hurry.

Our next destination after Vientiane was Kong Lor Village, where we planned to visit its famous caves. Our hostel in the capital (Lucky Backpackers) offered a direct transfer, or at least they advertised it as such. It didn’t quite work out that way.

We paid 110,000 kip each for our Kong Lor tickets, and everything started off as usual – we were collected from the hostel by a van and taken to another location where we transferred onto a bus. As the journey progressed the views grew increasingly beautiful as we wound through hills and valleys.

Then we stopped at a small roadside car park with a little hut, we assumed for a toilet break. But no. The bus unloaded our bags, turned around and left! I checked my map – we were about 40 kilometres from Kong Lor Village. Unbelievable.

The hut turned out to be a taxi station, and a man directed us to get into the back of a songtaew (a small van-like vehicle with an open rear). It looked like there were already too many people on board, but what the heck, we went with it, assuming the transfer must be included in our ticket. Our bags were loaded onto the roof and we squeezed into the back.

It took a little over an hour to get to the village, bumping along the gravelly road and over rickety bridges. It was a bit uncomfortable, but some glorious views of the mountains made up for it. When we arrived, of course the driver wanted payment – it wasn’t included after all. We forked up the extra 25,000 kip each with a wry grin.

Later that day I emailed Lucky Backpackers to suggest that perhaps they should communicate to travellers that their Kong Lor transfers don’t actually go to Kong Lor, and that the 110,000 kip didn’t cover the whole journey. They didn’t reply.

It might have been a testing journey, but it was worth it. Two nights of relaxation in the quaint little village was just what we needed, and our trip to the cave was a great day out.

In Kong Lor we stayed at Thongdam Guest House, which provided information for the next leg of our journey. The first two parts were in songtaews again, initially back to the hut where we’d been dropped on the way in, and then on to the town of Thakhek, back on the main road through the spine of the country.

In Thakhek we paid 30,000 each for a ‘VIP’ bus to Savannakhet. We were joining a service that ran from Vientiane down to Pakse in the south, apparently stopping at Savannakhet on the way.

Except it didn’t stop in Savannakhet. We were dropped off in a little town called Seno, some 30 kilometres away, and needed to take another songtaew from there for an extra cost of 10,000 kip each. Déjà vu much?

The songtaew seemed to drop all the other passengers at their houses, before finally arriving at Savannakhet bus station with only me and Lisa left on board, still a couple of kilometres from our guest house. Tuk-tuk drivers were on hand to offer us a ride, which would’ve incurred another fee, but this time we’d had enough and set off on foot.

The niggles of the journey were well worth it again – we absolutely loved Savannakhet! Away from the standard tourist route, it’s not a place a lot of people visit, and we found it perfect to unwind for a couple of days. Check out our two-day itinerary for Savannakhet and guide to places to eat in Savannakhet if you want to try it.

When we left Savannakhet, we had no choice but to brave one of the local buses to get to Pakse. It was a budget-friendly option at just 40,000 kip each. However, while the journey is doable by road in less than four hours, our bus took over seven, stopping every few minutes all the way to collect and drop off passengers.

The bus aisle was crammed with people, with no air conditioning and 30+ degree heat outside. I became well acquainted with a man in the aisle who sat on my lap the whole way. Up and down the bus, we saw the same thing – human overflow meant that those unfortunate enough not to have seats had to squeeze in and sit on others’ laps.

While this might sound uneasy, there was a fun element to it all. It helped that the local people were some of the most jovial and friendly we have come across. Nonetheless, we were relieved to finally arrive at the north bus terminal in Pakse.

Needless to say, we were a few kilometres away from the centre, and had to pay another 10,000 kip each for a songtaew ride to our hotel. Oh well – we were used to it by then and it was no longer a surprise.

Our hotel in Pakse (Royal Pakse Hotel) offered transport all the way through to the isle of Don Det in the 4000 Islands area of the Mekong River. Our tickets for 65,000 kip included a bus down to Nakasong and a ferry transfer over to the island.

The bus collected us from an agency across the road from our hotel, about 45 minutes later than scheduled. It appeared to have come overnight from the north as it was full of sleepy backpackers. At Nakasong everyone got out, and we had to walk 500 metres or so with all our bags down to the ferry port.

The port was more like a small jetty. We exchanged our slips for tickets and crowded into a small wooden boat, swaying from side to side as more people and bags came on board. The boat ride was a short and pleasant one though, taking less than half an hour to arrive at Don Det, with Mekong views to enjoy as we went.

Don Det to the Cambodia border: the final fling

We had read lots of bad stories about the border crossing from Laos into Cambodia, but it didn’t turn out too difficult, even with the extra complication that we were travelling just before Khmer New Year.

It was an expensive finish to our Laos transport adventure – the short trip to the border cost 100,000 kip each. For our transfer to Siem Reap on the other side, we booked ahead online with AVT. It was more expensive than booking buses through the tourist agencies on Don Det, but we knew the buses were busy due to the public holiday and we wanted some reassurance by booking in advance.

We were ferried back to Nakasong in another little wooden boat, walked back up to the bus station and waited there for about an hour, filling out visa forms. All we needed was a passport photo and the correct cash, which was 35 US dollars each for our visa fee and another 2 US dollars each for the stamp (they charge for the ink).

At last an air-conditioned minivan arrived to take us to the border, a little bit of style to complete our journey though Laos. Less than 30 minutes later we arrived at the border and within a few minutes we were in Cambodia. A smiling man from AVT was waiting to meet us on the other side. 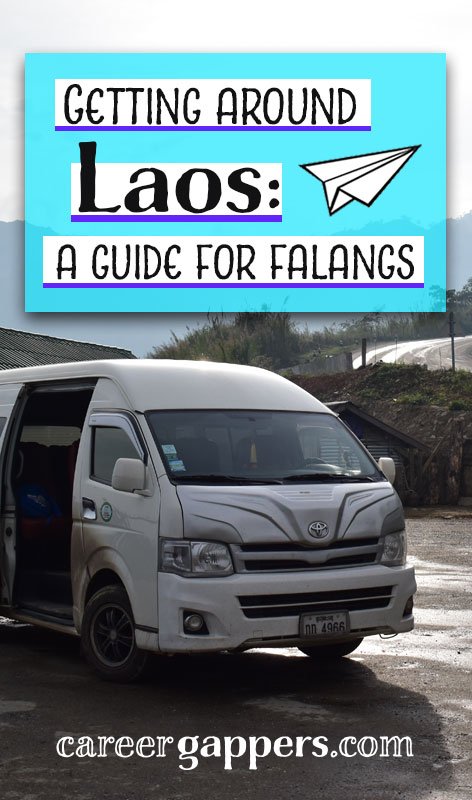 3 thoughts on “Getting around Laos: a guide for first-time visitors”