From Siberia to Antarctica: reflecting on a travel career gap ten years on

Ten years ago, married couple Hannah Charnock and Chris Anderson took a break from their careers in the UK and set off on a round-the-world adventure. In 19 incredible months, they voyaged by train through Russia, Siberia and Mongolia to China, before travelling on through Southeast Asia, Australia, New Zealand, South America and Antarctica. Finally, they made their way through Central America to Mexico City, where Hannah – who is half-Mexican – has a lot of family.

After returning home, Hannah landed a great new job in a more senior position, while Chris returned to his previous job on a sabbatical arrangement, having worked in the organisation’s Sydney office for a couple of months during the trip.

Now in their late 30s, Hannah and Chris live by the Sussex seaside with their three young children, still travelling as regularly as possible. In this interview, Hannah reminisces about their travel career break, attending a gala dinner with the Australian prime minister along the way, learning new skills, and how the whole experience has had a positive impact on their lives and careers.

Why did you decide to take a travel career break, and what did you hope to get out of the experience?

We’d wanted to do it for years. Chris took a gap year before university, and spent four months of it travelling with a friend around Malaysia, South Africa, Botswana, Zimbabwe and Australia, while I went straight to university, intending to travel afterwards.

However, after graduation various other things got in the way. Chris finished his degree and starting working, while I did a Masters and then spent two years as president of my students’ union. So travel plans were put on hold.

We then decided we should focus on developing our careers a bit and save some more money to do everything we wanted to do when we did eventually travel. Then getting on the housing ladder became a priority, and getting married, and we started thinking about wanting children… so the trip could be prolonged no longer.

We rented out our flat (which also helped us travel for longer when we weren’t ready to come home!), and set off.

How did you approach your plans with your workplaces, and how did they react?

I quit my job as a trade union campaigns officer (scary in the middle of a recession but it was now or never!). My boss was shocked but understanding, and an Australian colleague was very helpful, advising me on organisations to contact if I wanted to do any volunteer work when in Australia.

Chris was granted a sabbatical from his client relationship manager job at a software company, with the possibility of working at his company’s Sydney office when we made it to Australia.

What sacrifices did you make in order to take a travel career break?

How did you plan and save for the trip?

We researched and calculated that for the places we wanted to go, we would need on average about £1,000 each a month, excluding our initial train travel from London to Beijing, which we arranged with the help of The Man in Seat 61, and which was around £800.

We worked and saved every month as much as we could after graduation. We planned  our first two months of the trip meticulously, knowing exactly what we would do each day until we reached Beijing.

“To this day I still don’t think we’ll experience anything as magical as Antarctica.”

After that, we had a rough idea, but we wanted the flexibility to be spontaneous and change plans, and we had no fixed return date. In our heads we thought we’d be away for 12–15 months, whenever the money ran out, but we ended up being away for 19 months in total.

Was there a stand-out experience of your journey?

Antarctica, hands down. We had always planned to try to make it there, but knew it would just depend on whether we were lucky enough to find a last-minute bargain once we got to Ushuaia, as there was no way we could afford the full fare.

We ended up getting about two thirds off, and it was worth every dollar! After those ten days we almost felt like we may as well just go home as nothing we would experience on the rest of the trip could beat it!

Of course, we did continue the trip and had many more incredible experiences, but to this day I still don’t think we’ll experience anything as magical as Antarctica.

If it doesn’t fit in your backpack you don’t really need it. A lot about penguins. And you can make friends anywhere.

Did you do anything to keep up with your fields of work while you were away?

We both volunteered as English teachers in Thailand, first in Khao Lak in southern Thailand for a few weeks in local primary and high schools, and then in an orphanage in Mae Hong Son in northern Thailand.

In Bolivia we stopped so that Chris could take a Spanish course for a month. I volunteered with a charity working with street children while he was studying.

“The experience I gained in my time working on this campaign was definitely beneficial to my career when I returned home.”

Chris worked for two months in his Sydney office, and I volunteered at the Australian Council of Trade Unions, working with the Australian Labor Party in the run-up to the federal election campaign. During this time Julia Gillard took over from Kevin Rudd as prime minister, so it was an incredibly exciting time in Australian politics. I was ridiculously fortunate to find myself at a gala dinner with Julia Gillard in my first week at the ACTU, in her first week as PM!

The experience I gained in my time working on this campaign was definitely beneficial to my career when I returned home.

Did you find it difficult to return to work afterwards?

Chris already had his job to go back to. I fully anticipated struggling to find work for some time, as the UK was still in recession. However, I wrote a few applications and did two phone interviews a couple of weeks before returning, and started work just two weeks after returning to the UK.

Do you think your travel experiences have had a long-term impact on your careers?

Has your perspective on life changed in any way as a result of taking a travel career break?

Yes. We are more open-minded, more trusting of people, place little value on material possessions, and the more we travel the more we want to travel more.

What advice would you give to other people who are considering taking a travel career break?

Plan, but don’t over-plan. And do it!

If you liked Hannah and Chris’s story, you may also like:

Ready to start planning a career break of your own? You can begin now with our ultimate guide to taking a travel career break.

We are always looking for more inspiration stories from people who have taken travel career breaks. If you have one to tell and you’d like to be featured in our interview series, drop us a line: alex@careergappers.com. 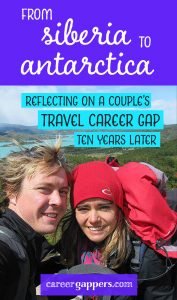