Alan had just been given a big promotion and pay rise at work, when he made the decision to leave it all behind and travel the world. He had worked in a plethora of jobs, but his real career was in sales – mainly boiler sales in the UK. Since returning home after his travel career break he has been working as a national sales manager in the HVAC industry, but he is now embarking on a new mission to try and change the world through politics.

In this interview, Alan discusses how his travel experiences have set him onto this path.

He is also the founder of More Passport Stamps, a travel blog based around reviews. His mantra is never to write anything he doesn’t believe or hasn’t experienced, and he doesn’t use pop-ups or affiliate links.

Why did you decide to take a travel career break?

I had wanted to go for a long time (don’t we all), but hadn’t been able to travel for more than two continuous weeks since I moved back to the UK from Australia in 2011. I finally made the decision, just a few weeks after having a huge pay rise that nearly doubled my salary!

It was not an easy decision, and if I did it again today it wouldn’t be either. In fact it never would be easy, but if you are contemplating it, it is usually the right decision.

How did you approach the decision with your workplace?

As I had recently switched to the increased salary my new boss was astounded, but you can’t put a price on freedom.

I explained that I had the opportunity to explore all the corners of the world and work in another great environment at the end of it (New Zealand), so they were disappointed, but understood.

How did you plan and save for your career break?

I used an Excel sheet to plot my money out and put aside a few hundred pounds per month. Also, the last three paydays helped!

I made bookings based on online research, but most of the trip wasn’t pre-planned so that I could be flexible. I didn’t want to be rushed on from somewhere I was thriving and enjoying.

What did you hope to get out of the experience?

I wanted to see parts of the world I had never seen, see what I could learn from different cultures and experience different ways of life. I think research and watching documentaries is great, but there can be nothing like experiencing it for yourself.

What are the standout memories of your travels?

As corny as it sounds, Machu Picchu is like nothing else. Peaks so high they are difficult for your mind to comprehend, then an ancient civilisation steeped in history among the clouds, it’s worthy of the hype for me.

I also enjoyed horse riding to Devil’s Tooth in Bolivia, with stunning scenery and zero health and safety rules. Great fun with some insane Bolivians!

There are too many amazing adventures to pick out a few, the list would have to be 100 bullet points!

I found that I was always saving for another day, or putting off my next trip because of X, Y and Z. The reality is if you want to go enough you will make it happen.

I also learned that your career goals will change, so you should never be too worried about missing out.

People often use their career path as an excuse not to travel, when in fact the opposite is true. Both your CV and you as a person will grow in ways that staying in your current country could never facilitate.

After your trip, you worked in New Zealand for a year. How did you re-adjust to this situation?

The Kiwi way of life is more relaxed than the UK, so it was a nice change. The people are great and I would go back in a heartbeat – I’d just miss my friends and family a lot!

As you may imagine, making new friends happens pretty quickly, whether it’s through work, hobbies or just socialising.

I have many good friends to this day from my time in New Zealand. I flew to Belgium recently to meet up with one of them who was there for his wedding party. It was another great trip that would not have been possible before my career break.

Is your working life back in the UK different as a result of your travel experiences?

How have your travels impacted the way you view your career?

A career is just that, a way to earn money and give your all to be great at something, but it’s not the be all and end all. If you died your business would replace you tomorrow, always remember that.

How did travel get you into politics, and where do you see it going?

All around the world, politics is corrupt. People in the UK think we have a democracy, yet it seems to me this has been eroded to the point where I think using the word democracy to describe what we have is laughable.

I am going to represent everybody, which includes the forgotten working classes, and use common sense to rebrand politics to be fairer for everybody.

I look at the discussions in the house of parliament and I see nothing but old toffs on either side of the same coin, shouting phrases like “here, here” and “order” – all whilst nothing gets done. I am hellbent on having a normal person in there, to represent what is really happening in the UK. Oh, and it would be nice if they remembered that there’s more to the UK than London too!

What advice would you give to someone who is considering a travel break or moving abroad?

As above, just do it! Give yourself a date, book the first leg and then the rest will fall into place because then you have to do it. Try it, it works!

If you enjoyed Alan’s story, you may also like:

Feeling inspired to plan a career break of your own? Get started now with our ultimate guide to taking a travel career break.

Do you have a story to tell about a transformational travel career break? We’d love to hear from you. You can get in touch on alex@careergappers.com. 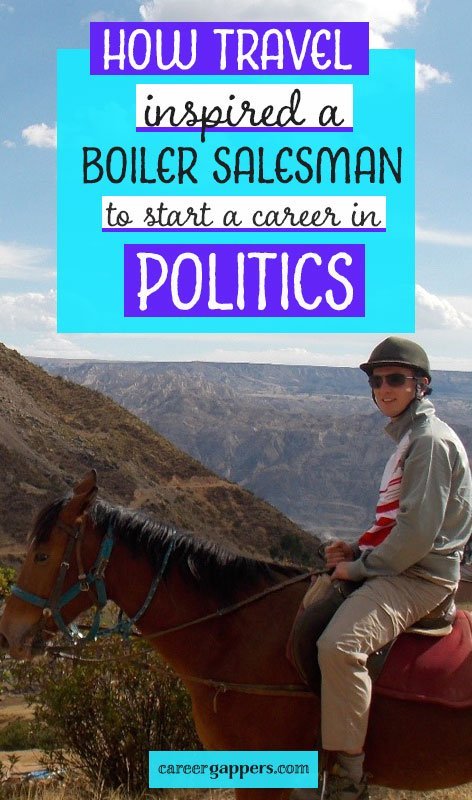