Mike Biserta sold his house and took a break from his job with the New York City Fire Department (FDNY) to travel the world for a year. Back in the USA, he is fitting out a van to live on the streets of NYC. In this frank and honest interview, he talks about his journey and what he’s learned along the way.

We met Mike when hopping across some postcard-perfect Fijian islands on our own travel career break. We were sitting there in our resort bar with beers in the middle of the afternoon. He came over and said, “Mind if I join you? You seem like my kind of people!” Many more drinks followed.

A few days later, we met up with him again in Melbourne, Australia. Then a couple of months further down the track, our paths crossed for a third time in Thailand (once again on a tropical island). We were always struck with Mike’s infectious positivity. He’s one of those people who can just get along with anybody. Below, he explains a bit more about his #nobaddays mantra.

We’re looking forward to more drinks and laughs in country number four. But for now, over to Mike!

Why did you decide to take a career break to travel?

Honestly, it’s not a story like most people. I really LOVE my job. It defines me. I love what I do and I can’t imagine myself doing anything else.

I really just wanted to see the world and experience other cultures while I’m still young(ish). Travel changes your perspective on things and, in many ways, has made me more appreciative for what we have back home.

Is it common for people in your profession to take career breaks?

Lots of people thought I was fucking around when I mentioned it at first.  It’s not common at all. The firehouse had a big ‘ball-busting’ culture so I got hammered pretty hard about it. All love though.

Was there a good support system for you to take a career break?

It was pretty basic.  All I had to do was send a letter up the chain of command specifying the reasons.

I mentioned I would be travelling and volunteering in Nepal a bit. About six weeks later I got a letter back saying it was approved.  Three weeks after that I was fucking OUT.

How did you save money for a travel career break?

Actually I sold my home. Probably not the best choice as far as investments go, but I wouldn’t change it for the world. It allowed me to do what I wanted (within reason) and travel with a clear head.

I am lucky enough to have a career with the FDNY and have the security to make stupid decisions like selling a home in NYC to galavant and drink beers with a crazy British couple!

Where did you go, and how did you prioritise the destinations you planned to visit?

I wanted to travel with no plan. I booked a one way trip to New Zealand and just went from there. I never went more than one flight ahead.

I would only book my first night or two of accommodation to keep me free to meet and explore. Nothing worse than meeting a bunch of legends and then having to leave because you planned some shit way ahead.

I learned that on my first trip to Thailand four years ago. I just try to keep it cruisy.

What did you learn from your travel career break that you would never have learnt otherwise?

I learned that most people are fucking friendly and helpful and generous to strangers. Even in countries our embassies advise us not to visit.

Did you find it difficult to go back into work when you returned home?

As I’m typing this I’m one month back to the firehouse and I couldn’t be happier (aside from not being on the road of course). I work with great guys and get to do really cool stuff.

Adjusting back to real life has been softened because of my love for what I do. Getting back in a schedule was a bit strange. But other than that, it’s all good at work.

You are now fitting out your own camper van to live on the streets of NYC. What inspired this lifestyle change?

I just wanted to let go of some of the stress and possessions I was holding. The less I spend on housing and vehicle, the more I’ll have to do the things I love.

At the moment that’s surfing, travelling, and hunting. I owned my home and sold it to travel,  then realised it was really just an anchor.

I’m lucky enough to retire quite young, 41 if I want, and I don’t plan on wasting away in NYC. So, I looked into tiny homes. Super cool but not really possible in an urban environment. Then I stumbled onto RVs and vans, and the rest is history.

How are you finding the experience so far?

It’s fun. The van is being outfitted in Colorado so I’m a little detached from the build, but the guys at Rossmonster Vans have been sending me photos and updates almost every day.

It’s going to be an experience learning what to do and more what NOT to do to fuck this up.

If nothing else it’s a great conversation starter.  “I travelled for a year and live in a van” isn’t exactly common around here!

What does the future hold for you? Do you plan to take the van beyond the streets of NYC?

More travel whenever possible. I’m not planning any road trips at the moment to be honest. I’m not done with being abroad just yet. I think I’ll work for a year or so and then take a couple of months vacation down in South America.

I love being home and spending time with friends and family. I am, really, luckier than most in almost all aspects of life.

So I’m not in a rush just yet… unless of course you tell me there’s a pint waiting for me somewhere!

What advice would you give to someone who is unsure about taking a career break?

Be positive about it. I’ll share with you a mantra I learned through travelling that has helped shape the way I live my life. I use it whenever I have doubts about something.

‘No bad days’ is the motto of Cabo San Lucas, the first place I ever traveled solo. I loved the idea and basically morphed it to fit my own situation.

I’m extremely lucky. I’ve seen what real problems look like. I’m not a five-year-old kid with cancer or a soldier coming home missing arms or legs. I have nothing REAL to complain about.

So now, #nobaddays is a way of life for me. I try my best not to allow negative thoughts to affect me. It’s ok to acknowledge them, then move past. But I don’t dwell on shit or complain anymore. I have it too good for that.

If you don’t like your job, leave. Go out and find what you’re passionate about. Even if you don’t end up making any big changes, and just go back into the same career, that’s great too. At least you’ll be interesting and have a wild story!

Thinking of taking a trip to NYC? Check out this great 24-hour New York City itinerary by Bel Around the World.

Do you have a story to tell about a transformational travel career break? We’d love to hear from you. You can get in touch on alex@careergappers.com. 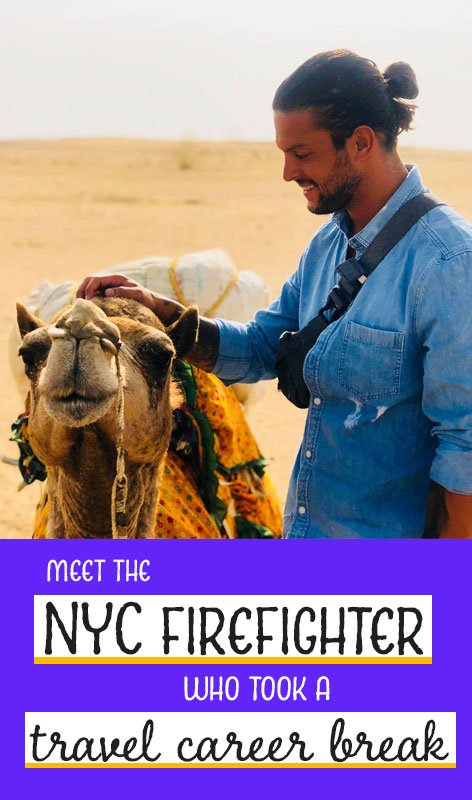