Best times to visit Patagonia: everything you need to know

There is no exact science to identifying the best times to visit Patagonia. It is a vast and formidable land, covering over a million square kilometres that encompasses the deepest lake in the Americas, a giant ice cap and one of the world’s largest deserts. In this guide, we explain everything you need to know about the Patagonia seasons, how to beat the crowds, and the optimal times to visit for a range of activities from hiking and skiing to cruising and wildlife-spotting.

For comprehensive information on planning all aspects of your trip to the region, see our Patagonia itinerary and travel guide.

The weather in Patagonia can be highly unpredictable, and differs significantly depending on location within the region. However, the climate follows patterns that you can use to plot the optimal time for your trip.

Throughout the year you can expect strong winds, and rainfall is always a possibility. In the summer months the temperature is warmer and rain less frequent, but you should pack for all weather conditions regardless of the time of year you plan to visit. Temperatures at night can drop below zero at any time of year, so if you intend to camp it’s vital to have decent gear and warm clothes.

Read our guide to the 25 best hikes in Patagonia

A quick guide to Patagonia seasons

The basic seasons are as follows:

The periods either side of the core summer months are often referred to as the ‘shoulder seasons’: October–November and March–April.

In many ways, these are the best times to visit Patagonia. While the climate isn’t quite as pleasant as it is in summer, it’s still warm enough to get out and about, with plenty of daylight hours and good conditions for outdoor activities.

Furthermore, as it’s not peak tourist season, there are fewer crowds around and prices are generally cheaper. You can often get good deals on tours, activities and accommodation.

Another bonus is that with fewer people on the trail, there is a better chance you will see some of Patagonia’s rarer species in the wild.

We trekked in different regions of Patagonia during the October–November shoulder season and found it to be just right. The temperature was perfect for those long days on foot, and there were enough people around to socialise without it being too crowded.

See our guide to the best small group tours in Patagonia

The remoteness of Patagonia means a quiet high season

It’s worth noting that even during the peak summer season, the crowds are rarely overbearing. As Patagonia is so remote, and reaching it takes a lot of effort, it’s extremely quiet in comparison to popular tourist destinations elsewhere. You won’t find yourself wrestling through crowds to get a photo as you might at Iguassu Falls, for example.

If you do choose to visit between December and February, the most important thing to know is that the higher relative volume of visitors means you will need to be more organised with booking transport and accommodation in advance.

The distance from the far north to the deep south of Patagonia is over 2,000 kilometres, and so there is a significant difference in temperature. For example, when we visited Bariloche in mid-September, it was noticeably warmer than when we visited Ushuaia, the world’s southernmost city, in October.

In the northern parts, around the Lake Districts of Argentina and Chile, the hiking season begins around early September, whereas in the extreme south of Tierra Del Fuego National Park it’s more like early-to-mid October.

There is also a stark difference in climate between the east and west of Patagonia. The eastern coast enjoys warmer temperatures as a result of equatorial currents from the Atlantic. In Puerto Madryn on the east coast, high temperatures reach 30°C in January, even though it’s further south than Bariloche in the north-west of the region, where the high is 24°C.

Torres Del Paine in Chilean Patagonia is home to the region’s most legendary hiking trails. One of these is the W Trek, which takes 3–6 days and double-arcs in the shape of a W between the landmarks of Las Torres on the east side of the park and Grey Glacier on the west. There is also a vast choice of amazing day hikes in Torres Del Paine.

While Torres Del Paine National Park is open all year round, many of the refugios are closed in winter, bus transfers run less frequently and guided tours stop operating. This makes it more difficult to visit but also an enticing time of year for serious hikers, with far fewer people on the trail and the chance to see the iconic sights enshrouded in snowfall.

The high season in Torres Del Paine runs from October until April. As discussed above, the shoulder seasons at the start and end of the high season can be the best time to hike in Patagonia, with a conducive climate for trekking and a less crowded trail. For photography lovers, the spring months (October/November) are a chance to see the park with flowers blooming, while the autumn (March/April) foliage transforms the landscape with beautiful orange and red hues.

If visiting during the peak summer months (December to February), it’s advisable to book accommodation on the trail several months in advance, especially for pitches in the free campsites, which are snapped up quickly.

Outdoors in the Lake Districts: Bariloche and Puerto Montt

The Lake Districts of Chile and Argentina in the far north of Patagonia offer some spectacular hiking opportunities with a milder, warmer climate than the likes of Torres Del Paine and Tierra Del Fuego in the south. During the summer months you can also try kayaking and horse riding.

In September, the beginning of the hiking season in the Argentine Lake District overlaps with the end of the skiing season opening more options for your adventure itinerary. Note that some of the higher-altitude hiking trails, such as Refugio Frey near Bariloche, don’t fully open until October.

If you visit the mountain town of El Bolsón in Argentina during September, you will see gorgeous pink cherry blossoms blooming in the town.

One of the most unique and awe-inspiring sights in Patagonia is the magnificent Perito Moreno Glacier, near the Argentine town of El Calafate. The glacier is 30 kilometres long, covers over 250 square kilometres and is part of the giant South Patagonian Ice Field.

The glacier is located in Los Glaciares National Park and is open all year round. The most popular times to visit are aligned with the trekking season from October to April, with summer being the peak time. Many travellers stop off en route between Torres Del Paine and El Chaltén, while lots of tourists come specifically to see the glacier. This means it can get fairly crowded; it was by far the busiest attraction we visited in Patagonia.

There’s no reason you can’t witness the wonder of Perito Moreno in winter, though. You’ll need to wrap up warm, but you will have the pleasure of seeing it in relative peace and quiet, which will also make for better photos.

If you’re looking to hike on the glacier – which is a truly one-of-a-kind experience – then there are seasonal restrictions to bear in mind. The ‘big ice’ full-day glacier trek is open from September to April. The shorter ‘mini trek’ is available all year round except for July.

When you can spot different types of Patagonian wildlife

As a general rule, the more people on the hiking trail, the less likely you are to see wildlife. In winter in Patagonia there is a much higher chance of seeing pumas in the wild. During the hiking season, it’s best to visit around October–November or March–April if you want to see some of the region’s beautiful creatures.

We were lucky enough to run into a giant Magellanic woodpecker at the beginning of November, and we met others who had seen the endangered huemul (South Andean deer).

One of many wonders of Patagonia is the opportunity to see penguins in their natural habitat. The optimal places to see them are in Punta Tombo, Puerto San Julián and in the Beagle Channel off Ushuaia. Magellanic penguins begin to arrive on the Patagonian coast from September and stay until March. If you visit in December and January, you can see penguin chicks feeding.

Patagonia’s Andean mountain topography naturally lends itself towards skiing, snowboarding and other winter sports. The best snow-sport destinations in the region are focused towards the north of Argentine Patagonia, such as Chapelco, Cerro Cayo and La Hoya.

The biggest resort is Cerro Catedral, near Bariloche, which offers over 120 kilometres of piste. It has held major international events in the past, such as the Snowboard World Cup.

The skiing season in northern Patagonia runs from June until around mid-October. That’s great news if you’re a fan of outdoor adventure in general; visiting in September you could combine hiking, skiing and other activities as the seasons overlap.

Best times for cruising to Antarctica

For some people, the ‘end of the world’ on the southern tip of Patagonia is still not enough; the ultimate bucket-lister is a venture south to the icy waters of Antarctica.

Cruises to Antarctica depart from the shores of Ushuaia from the end of October to the end of March. The best time to cruise within this season depends a lot on what you want to see and experience:

Check out this article on planning a trip to Antarctica for more in-depth information.

What to pack for Patagonia weather: essentials

Our Patagonia packing list provides a comprehensive lowdown of everything you need to be ready for the region’s unpredictable and sometimes extreme weather. The essentials we recommend are:

Before you go: book your insurance!

Patagonia’s scenic wilderness is incredible to witness, but it also comes with some risks. While it is generally a very safe place to travel, and you would be very unlucky to come to any harm, it’s best to cover yourself with travel insurance just in case. You can check out our full guide to career break travel insurance here.

If you were to slip and injure yourself in the remote depths of one of Patagonia’s vast national parks, for example, the evacuation process can be expensive. In the rare event you need to be evacuated by helicopter to a nearest place to receive treatment, the costs could be devastating if uninsured.

We recommend SafetyWing for Patagonia travel insurance. You can choose between a long-term monthly subscription policy, which saves money for nomadic travellers, or a short-term policy with specific dates, which are still very competitive. They are backed by a reliable underwriter and great to deal with. Read more in our review of SafetyWing insurance.

SafetyWing’s policies all include hiking up to 4,500 metres, which is nearly 500 metres higher than the highest peak in Patagonia – so you’re well covered! Check out their insurance pricing tool to see how much your cover will cost.

If you are travelling elsewhere in Argentina, our guide to the best times to visit Argentina dives deep into the climate and seasons for a range of activities throughout the country.

Feeling inspired to plan your trip to Patagonia? Check out some of our other articles: 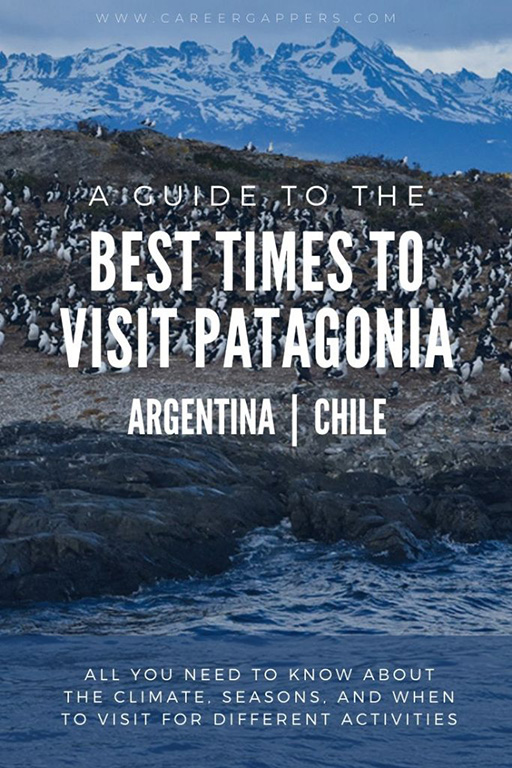