Best times to visit Argentina: timing your trip to perfection

Argentina is a country of great distances and geographical diversity, stretching from the tropics in the north to the sub-polar climes of Patagonia in the far south. There is so much to see and do, but when is the best time to visit? When will the vineyards be in bloom, when will the hiking conditions be optimal in Tierra Del Fuego, and when is the temperature in Buenos Aires just right for you? In this article, we dive into detail on the best times to visit Argentina for a range of different activities and locations.

Climate in Argentina: an overview

Argentina covers a huge amount of land, and there are many different climates spread across its various regions. The country comprises tropical rainforests, dusty deserts and steppes, icy mountains and glaciers, pampas farmland, and rolling green hills and fields. The altitude also differs significantly throughout the country, from temperate lowlands to the dizzy heights of the Andes (Argentina is home to the highest summit in the Southern Hemisphere, Aconcagua, which peaks just short of 7,000 metres above sea level).

The distance from the furthest points north to south in Argentina is a whopping 3,650 kilometres as the crow flies. That’s further than Lisbon to Kiev, or New York City to Las Vegas! So, given the country’s immense size and complexity, the best times to visit Argentina really depend on the places you want to explore and the activities you want to do. Let’s dive in a bit further.

As Argentina is in the Southern Hemisphere, its seasons fall at the inverse times to Europe and North America. So, the Argentine summer is in December–February, and winter is in June–August. However, the characteristics of the climate during the different seasons depends on where you are in the country. In the tropical regions in the country’s north and along the border with Brazil, summers are wet and humid, whereas in the Patagonian south this is the driest time of year.

Spring (September–November) and fall/autumn (March–May) are generally mild with cool nights. These ‘shoulder seasons’ are very often the best times to visit Argentina, especially if you want to plan a varied itinerary incorporating locations around the country. As they fall outside of peak season there will be fewer tourists and you can benefit from lower prices. Furthermore, the quirks of spring and autumn/fall mean you can witness the country’s magnificent scenery with stunning flora blooming or picturesque orange-brown foliage.

To break down further into the best times to visit Argentina, let’s now take a look at the pros and cons of the different seasons for some of the most popular activities and attractions.

This is perhaps the tourist activity in Argentina that is most affected by seasonality. Visiting Argentina’s vineyards in spring or autumn/fall is the difference between seeing lush, brilliant green landscapes or barren brown fields of bare stalks.

Mendoza, located in the west of the country under the shadow of the Andes, is the nucleus of Argentina’s winemaking industry. The city and its surrounding region accounts for around two thirds of country’s total wine production. The north-west is also an important wine region, centred around the scenic town of Cafayate.

The most fascinating and visually rewarding time for visiting Argentina’s wine regions is at the end of summer, when grapes are ripened and the harvest begins. From March to May in Mendoza, you can expect a more immersive and educational experience when touring wineries, as you can witness the harvesting process as well as having the chance to learn about production and taste the vintages. If you time your trip accordingly in March, you can experience the Vendimia Harvest Festival, Argentina’s biggest celebration of wine.

By the middle of winter, the climate is cooler and drier in both Mendoza and the north-west region, and the vineyards shed their leaves. See the photo below, which we took in mid-August, showing a bare wintry scene.

Wine tours do continue to run all year round in Argentina regardless of season, however. While the dry and bare winter season is a less intensive experience, there are far less visitors and you can enjoy cheaper tours and much smaller groups.

On the border of Argentina and Brazil stands one of the world’s great natural spectacles, Iguassu Falls. It is the largest waterfall system on our planet, twice the width of Niagara Falls, and is one of the most popular attractions in South America.

Iguassu Falls is located in a tropical region, and so the summer months, from December to February, are generally the wettest (it starts getting wetter from the end of October). This brings both advantages and disadvantages. If you are happy to get wet, the falls are at their most spectacular during this time with the water flow levels peaking. But it is also a very popular time, with lots more local tourists around, and so the crowds get busy.

As is often the case, visiting the falls just before summer in October/November, or just afterwards in March/April, can bring the best of all worlds. It is possible to visit in winter too, when the skies are likely to be brighter and fewer people around, but the water flow is at its lowest and least impressive.

Exploring Buenos Aires and other cities

Argentina’s capital Buenos Aires, along with several other major cities and cultural hubs, is located in the Pampas region. This is a vast area of fertile lowlands that covers over a million square kilometres extending into Uruguay and Brazil.

Buenos Aires is perched on River Plate as it flows into the Atlantic Ocean, and this coastal setting gives the city a cooler overall climate than inland cities such as Córdoba, Rosario and Santa Fe.

Even so, the summertime in Buenos Aires is sweltering, with average daily temperatures in January reaching 30 °C. As a hostel owner described to us during our visit, even many locals don’t like going outside at this time! If you do happen to be around, here’s a handy survival guide for a humid summer in Buenos Aires.

With this in mind, you’ve guessed it – the better time to visit Buenos Aires (and other areas in the Pampas) is in the spring or autumn/fall, when the climate is milder. We spent several weeks in the city throughout springtime and loved it – check out our guide to things to do in Buenos Aires. Visit a little earlier in August, and you can witness the exuberance of the Buenos Aires Tango Festival.

Of all the places to visit in Argentina, the Patagonia region is where the timing of your trip will make the biggest difference. This breathtaking landscape is where the you will find the most extreme and unpredictable weather, with fierce winds and torrential rain a common occurence.

Summer is the peak time for visiting Patagonia and getting outdoors, with the weather at its warmest and driest, and conditions conducive for hiking. This is when the region is busiest, although even the most popular trails rarely get overcrowded. Perito Moreno Glacier near El Calafate is the most visited attraction in the region. The shoulder seasons in October/November and March/April are again the sweet spot, when the climate is mild, and the towns and trails quieter.

The conditions for hiking in Patagonia become inhospitable in the winter months, from June to August, and many national parks are closed. This is more accentuated the further south you travel, which means a shorter hiking season in Tierra Del Fuego at the southernmost extreme of Argentina. Towards the north of Argentine Patagonia, in the Lake District around Bariloche, the climate thaws out earlier, and you can start hiking in September as the spring flowers begin to bloom.

Our guide to the best times to visit Patagonia gives a more detailed insight into the region’s climate and seasons.

With thousands of kilometres of Andean mountains, Argentina has an abundance of skiing locations along its rugged western strip. The country is home to the largest ski resort in South America, Cerro Catedral near Bariloche, which has hosted prestigious international events such as the Snowboard World Cup. Other popular spots include Las Leñas in the Mendoza province, La Hoya in the Patagonian province of Chubut, and Cerro Castor, the world’s southernmost ski resort, near Ushuaia.

The skiing season in Argentina runs through winter, and is longer the further south you travel. Therefore, the length of the ski season changes inversely with the hiking season depending on location. At Las Leñas the lifts are open from June through to September, but at Cerro Castor the season extends well into October.

Road-tripping in the north-west

The north-west of Argentina is one of the most beautiful and under-appreciated regions of the country. In the provinces of Salta and Jujuy, you will find otherworldly landscapes of ancient red rock formations, sweeping salt flats and sprawling vineyards. It’s a wonderful place for a scenic drive; see our north-west Argentina road trip itinerary for inspiration.

March–May is in many ways the optimal timing for travelling in this region, with warm weather, clear skies and vineyards in full bloom. It’s also a great option to visit in winter, as the climate is much milder here than elsewhere in the country at this time. Our trip was in August, when the temperature was fine for camping; the main downside of this time of year is that the vineyards are bare.

Summer, which doubles up as wet season, is better to be avoided here; temperatures soar, and the tumults of rain make driving conditions difficult, with road closures commonplace.

This activity is suitable only for the most experienced mountaineers. Towering above all other Andean mountains, Aconcagua is one of the Seven Summits and the highest peak south of the Equator. Even for the most accomplished climbers it is a gruelling, demanding ascent.

There is only a short window of time when it is possible to climb Aconcagua, from November to March. The high season, when conditions are mildest, runs from mid-December to the end of January.

What to pack for Argentina: essentials

Just as with timing your trip, packing for Argentina depends greatly on where you plan to go and what you plan to do. The contents of your backpack should be very different for the tropical north compared to the sub-polar south.

Out Patagonia packing list covers everything you need to bring if you’re planning outdoors adventures and you want to be well prepared for the region’s unpredictable weather conditions.

For the subtropical north-west you can pack much lighter. Bring ample sun protection – glasses, hat and sunscreen. For walking in this region, a pair of lighter hiking boots will do the trick – see our guide to the best hiking boots for travel for tips. If you will be around in summer for wet season, you will need some rain protection, ideally a good light waterproof jacket.

For trips that span various locations throughout Argentina, look out for versatile clothes and equipment that can be adapted to different climates. We have found that convertible hiking pants and 3-in-1 hiking jackets

are particular useful and adaptable.

Here are a few more useful items to bring along on your Argentina adventure: 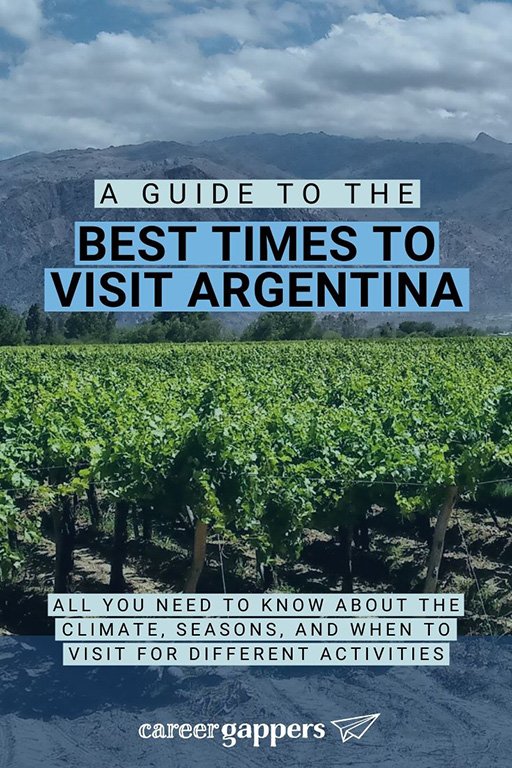