From business analyst to poet: a journey through the USA’s national parks

Alan Birkelbach spent three decades working in the Dallas area as a business analyst in the financial field. Sitting at a desk all day long, he worked in mathematical software and coding to analyse and verify sensitive financial information.

But in his spare time, Alan wrote poetry and got it published. In 2005, he was appointed as the Poet Laureate of Texas. A Spur Award winner and author of 11 books, he is a member of the Academy of American Poets and the Texas Institute of Letters.

Fast-forward to 2016, and Alan’s life took an adventurous new turn. Together with fellow Texas Poet Laureate Karla K. Morton, he set out on a mission to visit all 62 of the USA’s national parks, and write poetry inspired by each. After returning to Dallas, Alan fought traffic, walked into his office building, and quit his job. He is now embracing a new full-time career as a writer and poet.

In this interview, Alan talks about the four-year tour of US national parks, his decision to leave his job, and the influence travel has had on his life. His upcoming book, co-written with Karla and titled The National Parks: A Century of Grace, is due out in November 2020 and is the culmination of the journey. Learn more at www.wordsofpreservation.com.

Did you feel fulfilled by your career as a financial business analyst?

Yes. It was a different kind of fulfilment than what I feel now. That former life was a standard career path: college, then entry-level job, then attempting to do the expected travel and classes to climb a corporate ladder, all while balancing career and home.

Of course, salary and benefits were always a consideration. It was a comfortable existence with the requisite number of ups and downs, promotions and disappointments – but ultimately a life that gave me what was needed.

During your years in this career, where did you find inspiration for poetry?

My poetry and my daytime work life were always two separate worlds. I have been writing since middle school. From the beginning, inspiration could come from any source. That never stopped. The only change was the maturity of the viewpoint and the experiences.

Generally speaking, I was always a nature-based poet (there were a lot of poems about the Southwest), but I liked to branch out and try other things. And later, as I widened my reading horizons, I would try to emulate the styles of William Stafford, Sandburg, Whitman, and I tried to put more thought into T.S. Eliot, Patchen, and Pound.

“It had never been done before. It was a grand, mad, quixotic idea – and I quickly said yes.”

Why did you decide to take a break from the profession to visit all the USA’s national parks?

I was invited. The short version of that story is that fellow Texas Poet Laureate Karla K. Morton came up with the idea of visiting all the US national parks, taking photos, and writing a poem for each national park to create a book — with part of the proceeds going back to the park system.

It had never been done before. It was a grand, mad, quixotic idea – and I quickly said yes. We almost immediately started planning.

What arrangements did you make with your workplace before embarking on the trip?

I decided that honesty and clarity was the best approach. I had already committed mentally and emotionally to the project; the only question was how to fit it around my work/career.

Putting it more succinctly: I went into my boss, told him what I planned on doing, and asked how we could make it work. Karla and I worked around my corporate holidays. I used up my leave. It was a situation of compromise from all parties. My office was understanding and patient.

How long did the journey take, and what are your most poignant memories of it?

The travel part of the project took 45 months. If you add in the months of planning on the front end, and manuscript preparation on the back end, it was right around four years. That was not continuous travel. Generally, we would plan, visit a few parks, come back home, then start the cycle again. 62 parks over 45 months is a lot of miles and a lot of time on TripAdvisor!

The most poignant memories is one of the tougher questions. It sounds almost like a cliché, but some of the parks were life-changers. No amount of planning, and no reading of multiple guide books can prepare a person for unexpected epiphany moments.

The biggest for me was when we visited Wrangell–St. Elias in Alaska. On our last morning there, we stood on a mountain outside the lodge – and there were no other sounds. At the bottom of the mountain were three glacier-fed rivers, roaring their wild defiance. At the edge of the horizon was Mount Drum and its companions, snow-covered, far beyond my thin veil of civilisation. I turned to Karla and said, “I can’t go back to work.”

“Before the park project travel started, I had the emotional maturity of someone in their mid-40s. Which was okay, except I was 60 years old.”

That was August. Sure enough, when I flew back to Texas I went into my boss and said, “I’m done. I’m quitting work.” He talked me into staying until the end of the year.

There were other moments. The first glimpse of seeing the blue of Glacier Lake. The bears at Katmai. Meeting some of the incredible people we met. Life-changing experiences were not limited to the parks – but they would not have happened without committing to the park experience.

Did you learn anything from the experience that you would never have learned in the office?

Yes. I wish I could go back in time. Before the park project travel started, prior to mid-2016, I had the emotional maturity of someone in their mid-40s. Which was okay, except I was 60 years old.

Now, four years later, I have wisened beyond my years. I would do the parks all again.

What happened when you returned to the office and said you would be leaving your job?

I walked away from the office, and my job, in the midst of my adventure. The last day I was there my boss and my friends all wished me well — and said they wished they were going with me. I invited them.

Would I go back to that office? My practical side says it wouldn’t be a bad idea. After 2020, when the book is published and available in the parks, and maybe my travel and poetic projects have slowed down a little, I might go back to work. I probably should. An income stream is something I am definitely considering, but I have no fixed plans. Ask me in 2021.

What were the biggest challenges in making the transition from business analyst to full-time poet?

Financial. The loss of benefits, the discarding of security, of having a place to go every day that was stable. There is a comfort in a known set of faces and circumstances. And the structure. The left side of the brain rejoiced in a fixed path. But. The right side of the brain, the artistic side, said, “Time’s running out. Let’s go have some fun.”

How have your travel experiences in the USA national parks influenced your life decisions since?

Perspective. It’s all about perspective. When I was working behind a desk, I had no clear concept of how big the world was. Within a corporate world, the rules are laid out. On a poorly-marked trail in Joshua Tree you may need to make your own coping rules. The project taught me to take financial, emotional, and potentially life-altering risks.

What poetry projects are you working on now, and do you have more travel plans for the future?

This park project’s book, titled The National Parks: A Century of Grace, will be published in November 2020 by TCU Press. There are several parks we’d love to revisit, and we have some book-related events/travel in the works. We have our eye on a few new writing projects (for instance, we have been considering World Heritage sites), but nothing that we’ve started planning or trying to get funding for.

Travel plans? Mostly national park and book related. A few conferences, after the current pandemic allows. Writing tends to have a momentum – and it tends to lead to other projects and other interesting people. Travel attracts other travellers, art attracts other artists.

What advice would you give to other people considering taking time off work to travel?

Do not wait. There may never be another, or a better, time. The decision becomes less about the money than about what you miss if you do not go.

It’s not about the mountain.
It’s about the stories you tell
when you get back.

If Alan’s story inspired you, you can read more of our interviews with career break travellers. Start planning your own career break adventure with our ultimate guide to travel career breaks. 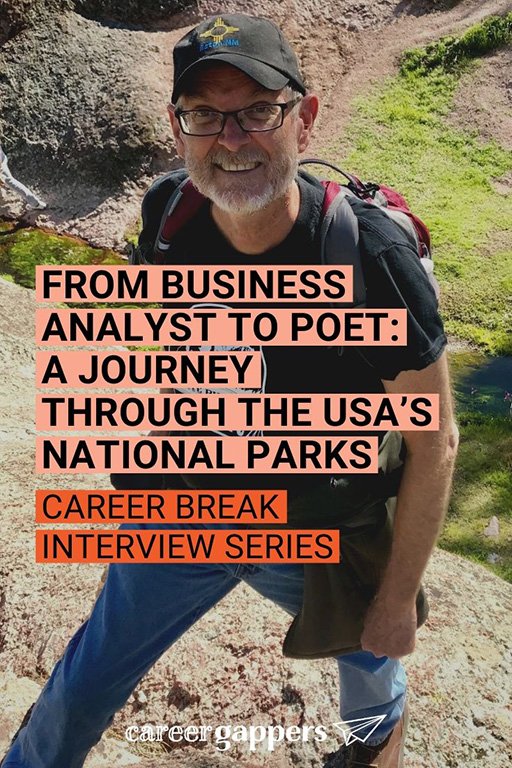 2 thoughts on “From business analyst to poet: a journey through the USA’s national parks”