A tale of four sabbaticals: a PR executive reflects on the power of time out

Tim Brown is CEO of Candid Communications, a public relations firm. With nearly four decades of professional PR experience, he has handled crisis communications for companies in various industries, and has a track record of landing clients on major media outlets, including The Today Show, Good Morning America and Wall Street Journal.

Before establishing Candid Communications, Tim was president of a national award-winning advertising agency that provided a generous sabbatical benefit to help employees recharge. Once every seven years, the agency’s employees are granted a four-week break on paid leave. Tim utilised the policy to take four sabbatical breaks during his time there.

In this interview, Tim talks through his sabbatical experiences, including a family road trip around the USA, time out at home to learn the drums, and a break in Japan.

Were you already working at the company when the sabbatical policy was introduced?

Yes, I was already working at the advertising agency when they introduced the sabbatical policy, which granted four weeks of paid time off for every seven years of employment. They imposed no other restrictions, but just encouraged employees to take time off, disconnect and clear our minds so we would come back refreshed and energised.

The company actively encourages employees to use the sabbatical benefit, and coordinates with clients and coworkers so employees can truly decompress from daily work demands and break away without having to check in or do work from the road.

What preparations did you make before each of your sabbaticals?

The first item was to ensure my numerous public relations clients were aware that I would be unavailable during the four-week sabbatical.

The next priority was to prepare the team with all the information, processes and authority to manage my clients’ accounts. The key was to anticipate the worst, guard against it and prepare for it so the team could effectively resolve any potential issue.

I also designated a senior colleague to take charge of my team so they could make decisions with authority.

Your first sabbatical was a family road trip in the USA. What were the standout experiences of this trip?

Gathering all of the kids in a Dodge minivan and driving from Salt Lake City to Washington, D.C. and back was the adventure of a lifetime.

We took in sites we never thought we’d see again, and we have not seen since. We realise that seeing US sites as a family was an incredible opportunity to make memories that will last a lifetime.

Seeing the landscape gradually change from the mountains of Utah to the lush green of the eastern states was a lesson for the family that life moves gradually from one condition to another – and that it’s all connected.

A worst memory was that the person I designated as team leader in my absence said she enjoyed that role so much she was going to start her own company. Thus, my time away gave her a safe environment to spread her wings more. I don’t fault her, and we’re friends even decades later, but it was hard to lose a key team member, which may be a downside to being absent for weeks.

You used your second sabbatical to relax at home and learn the drums. Why did you choose this rather than another trip?

The second sabbatical came up quickly, so we decided to do a staycation and relax without the pressure of travelling. I taught myself drums when I was 10, so I wanted formal lessons as an adult, and this was a time to focus on that.

“With drum skills reawakened, I started two cover bands: one at work for special events, and one with friends in my town.”

With drum skills reawakened, I started two cover bands: one at work for special events, and one with friends in my town. If we could’ve gotten band t-shirts, we may have done summer tours, but t-shirts can be pricey, haha.

Your third trip took you to San Francisco and northern California. What are your best and worst memories of this trip?

Staying in the heart of San Francisco with our two children living at home was a rush. One older son now worked at Lucasfilm and gave us Skywalker Ranch tour where we saw the Luke Skywalker’s actual lightsaber, Darth Vader’s helmet, a Stormtrooper helmet, and the hat, whip and carpenter’s holy grail cup from the Indiana Jones movies.

A highlight for my computer-geared son was visiting Apple’s head offices. Just being in the company store was like an out-of-body experience for him. Touring Google’s campus put us in a world away from normal life. And maybe that’s what it’s all about: getting outside of the everyday activities, making memories and enjoying experiences.

“It’s hard to rebuild, but having a fresh outlook gave me more optimism.”

Someone said the best part of any vacation is before and after the actual vacation. Before you go, you anticipate, plan and get excited for it. During the vacation, you deal with the realities of travel, tiredness, uncomfortable accommodations, less sleep, non-stop interaction, etc. And then after trips, you reflect on how fun and wonderful everything was. I’ve found each sabbatical was kind of like that, which tells me to tough it out and make the most of trips because we now look back with fondness on each opportunity.

A worst memory is when I returned, a key employee told me she had been hired by another company. It’s hard to rebuild, but having a fresh outlook gave me more optimism, and I learned, even in that, that things work out – they always do.

Why did you choose Japan for your fourth sabbatical, and did you find the relaxation you were looking for?

Having lived in Japan from 19 to 21 years of age, I had never been back, and my wife urged us to go while our health was still good. That was a smart decision, because we walked up long stairs at temple sites and were able to pack a lot of experiences into an extended trip throughout Japan.

Along with seeing friends I knew 40 years earlier, I routed us to the land of temples in Kyoto, which was an amazing city of numerous temples in calm surroundings that were all within walking distance of each other.

One of the most peaceful places was at a temple site where we could see no evidence of modern life, and I soaked it all in. With the rush of life and work hitting us constantly, this was a deep therapy that connected me with nature. It was as if the lush green trees and ancient Japanese temples were speaking a calmness to my soul. For me, that was a rare experience that still brings peace to me today.

What life lessons have you learned from your travel sabbaticals that you would never have learned otherwise?

The main lessons I’ve learned from my sabbaticals is to slow down, and to realise there is more to life than work. Work is wonderful, and earning money and accomplishing successful results builds character, but life is more than that. And stopping to sharpen the saw, as author Stephen R. Covey said, brings valuable replenishment to the only thing you control (yourself) and to the very things that brought you to the level of success.

Life moves quickly and had we not had our first sabbatical with all seven kids in that minivan, we would have missed a treasure of memories and experiences. One month after that first sabbatical, our oldest daughter enrolled in college, and life changed for us all.

The US has so much to experience that we are glad that we discovered sites in our own back yard.

Have you had any difficulties or challenges returning to work after taking sabbaticals?

When I returned to work after my first sabbatical, I had to think about how to type on the keyboard again. Apparently, I totally checked out from work demands. (It’s the same feeling I had when I got my first massage – ultra relief).

I had concerns that if my team, employer and clients could function without me for an entire month, they may start to question my value. That was a real concern, but after about 3 days back to work, I felt comfortable back in the saddle.

Have many of your colleagues taken advantage of the sabbatical policy, and have you heard other inspiring stories?

Every colleague who qualified for a sabbatical has taken one. One colleague used it to set up his own design firm, which he did after coming back to work for a few weeks.

Others have used the time to connect with family, which are opportunities that become more rare when adult children move away.

Has your company’s sabbatical policy been a factor in why you have continued to work there for so long?

Whenever I would get close to qualifying for another sabbatical, the benefit itself would be another factor. Who doesn’t want to get paid for four weeks off on top of your own vacation benefit?

The reality is, though, that in a leadership position, it is hard to take four weeks of vacation off every year. Adding another four weeks of a sabbatical meant I often would have to roll over some of the vacation time to another year. It’s a happy problem.

What advice would you give to other people considering taking time off work to travel?

Do it while you’re young and healthy enough to enjoy travel. Plan the trip so you make the most of the time. Don’t over-plan to the point that you are stressing everyone out if you don’t get to everything you wanted.

Realise that people matter, and they may not be there forever. Realise that money is only money and if you have a good job, you’ll be able to pay off reasonable debts you spent on sabbatical experiences. (On our first sabbatical, we borrowed $5,000 from my in-laws to drive across the US. with seven kids to stay in double rooms at 23 motels in 28 days. We paid it all back fairly quickly.)

While burgers were great when I was in high school, fast food gets old quickly while on the road. We had to plan for normal food to stay healthy.

Did you connect with Tim’s story? You can begin planning your own sabbatical adventure with our ultimate guide to taking a travel career break. For more inspiration, read more of our career break interviews. 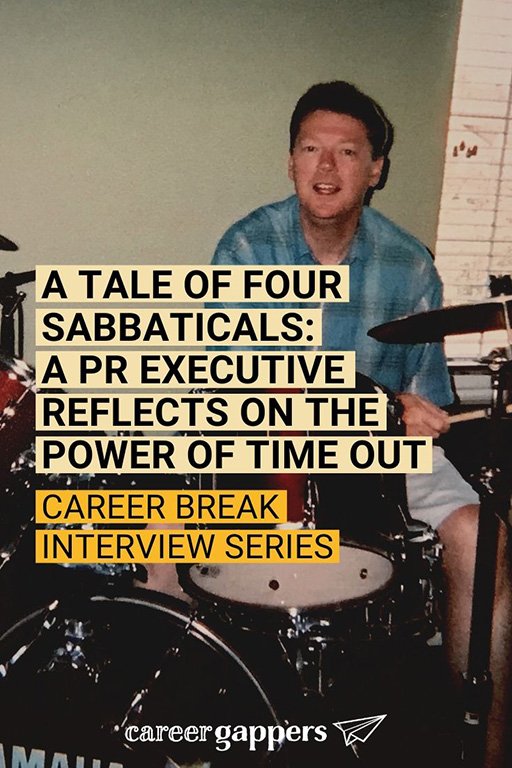