It’s been an unusual month in our little bloggerverse. The number of hours we’ve spent on the blog have been a fraction of the usual level, but our growth has continued apace. How? This is reflective of the very nature of blogging. Once you get those big wheels turning, momentum gathers, and the train won’t stop when you take a little break.

Here are our headline stats for April:

We’ll get into the details of all this, but first, here’s why we’ve been working on reduced hours…

For the first couple of weeks of April we were settling into our new flat in Lincoln, after the move I mentioned in last month’s report. Aside from the time taken to get our new life in order, the main problem from a blogging perspective was that we didn’t have internet installed in our flat until 9th April. This put an instant limit on the hours we could devote to Career Gappers.

I worked for a few hours every day at Lisa’s parents’ house (big thanks to my mother-in-law Sharon for picking me up and dropping me off every day!), plus the odd trip to a café to use wifi. But for the rest of the time we were off-grid.

Then, we spent the second half of the month travelling in Italy. Although we devoted a lot of this trip to gathering content and working on partnerships with local businesses – so, technically working – we spent precious little time online. At most, we connected for a few minutes a day to keep our social media accounts ticking over.

This resulted in a three-week period with no new content on the blog; our longest yet. We only published three new articles in the whole month, and that’s including a business report.

However, the secret to a successful blog, as we continue to learn, is not just churning out content…

In April, our website traffic grew for the ninth consecutive month. We squeaked past our target of 12,500 page views, ending on 12,590.

Our growth rate still isn’t as high as we’d like, which I’ll discuss later, but as long as we maintain a steady upward trend then we’re on course to reach the threshold to qualify for Mediavine this year and thus to begin making income from advertising.

Here’s our updated traffic graph (note that Career Gappers was launched in July 2018 – the traffic shown before that is to our previous blog domain): 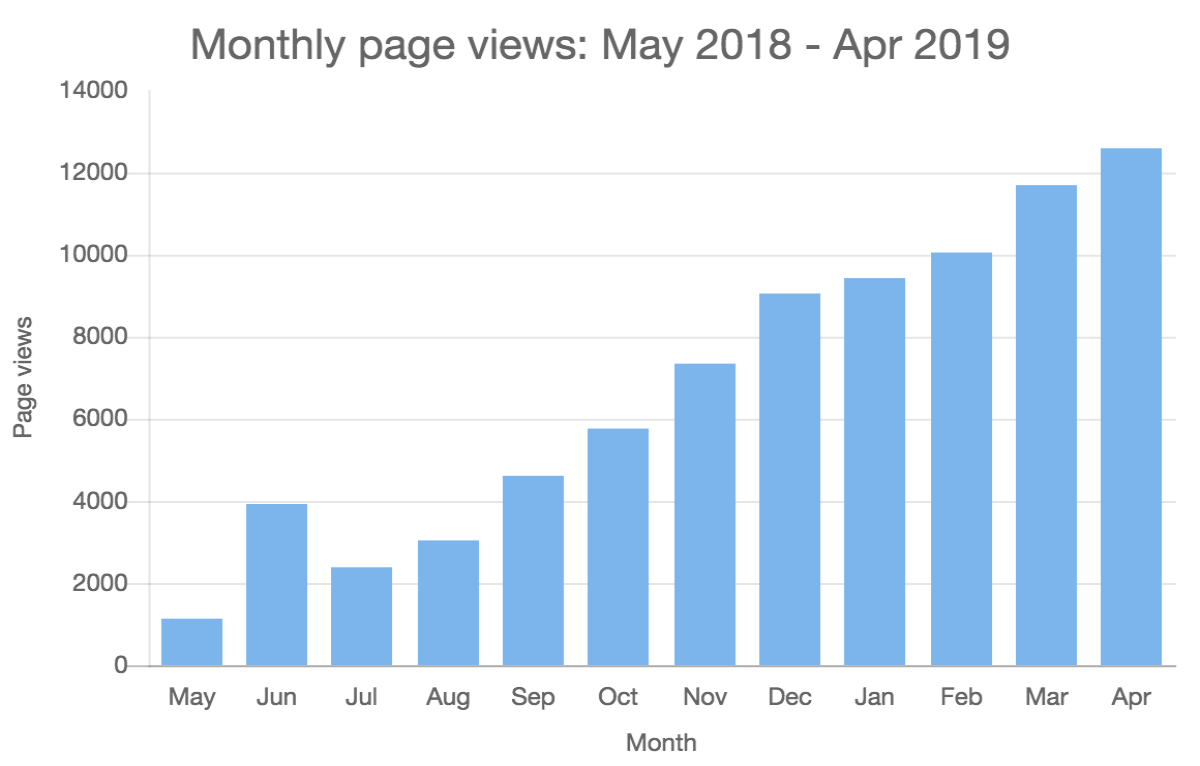 Furthermore, we hit another new record for referrals from search engines, which continues to be our most important source of traffic. Although we didn’t quite reach our target of 7,000 referrals in April, we still grew healthily in this department: 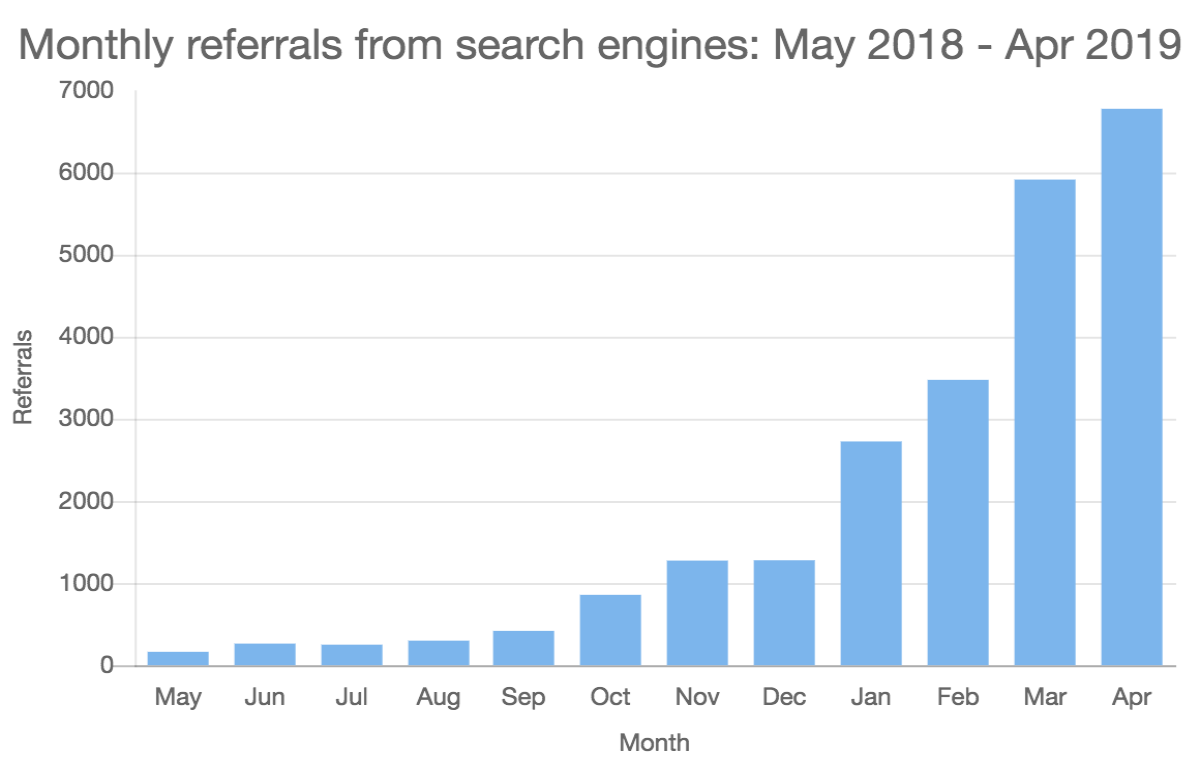 One very positive sign is that our traffic from search engines is spread very widely across several articles. Our highest performing article in April only accounted for around 5% of our total traffic, and there were 36 articles that contributed at least 100 page views each. This means we’re not relying too heavily on one or two high performers, and thus gives us a solid foundation of regular traffic.

During the month we had a few guest articles published that we had submitted previously, which has helped our domain authority (DA) climb another notch to 31.

Now that we have a wide portfolio of blog posts published over a period of several months, we can really begin to dig down and analyse what’s working and what isn’t. In doing this we’ve noticed that our highest-performing articles tend to be the longest ones, which provide the greatest depth of information. Our Patagonia itinerary is a prime example, which has received well over 3,000 page views to date, and is our longest article at over 7,000 words.

With this in mind, we’re moving steadily towards a more refined model of content production. As I said above, a successful blog is not necessarily one that churns out content. We believe it will be more effective to produce fewer articles that are each more comprehensive, more thoroughly researched and better optimised.

During the first couple of weeks in April, I spent about half my time working on a single article that will serve as an experiment for this new content model. At over 10,000 words, it will be our longest article to date, providing a wealth of meticulously researched information on one of our focus destinations and core activities, and it also links into our two high-value affiliate programmes. We expect to publish the article early in May, and will be keeping a very close eye on its performance.

We don’t anticipate that every article we produce will be structured like this. Rather, instead of publishing, say, eight regular blog posts in a month, we’ll cut down to four or five, with at least one in longform.

One spike of traffic in April came when we were featured in a story on the Newark Advertiser website. This is the local press in the town where I grew up. For several days our story was the most-read article on the website, which translated into an influx of visitors to the blog.

We’ve also been contacted by BBC local radio and invited to talk on an afternoon show about taking a career gap in later life. I’ll be doing this in the second week of May, which will be another big help in spreading our message.

Rounding up other activities

With our reduced blogging time in April, we weren’t able to place much focus outside of core content production. However, we’ve still seen some interesting developments in other areas.

Pinterest is the aspect that has suffered the most in terms of our time spent on it. Somehow, though, we’ve seen a notable increase in referrals: 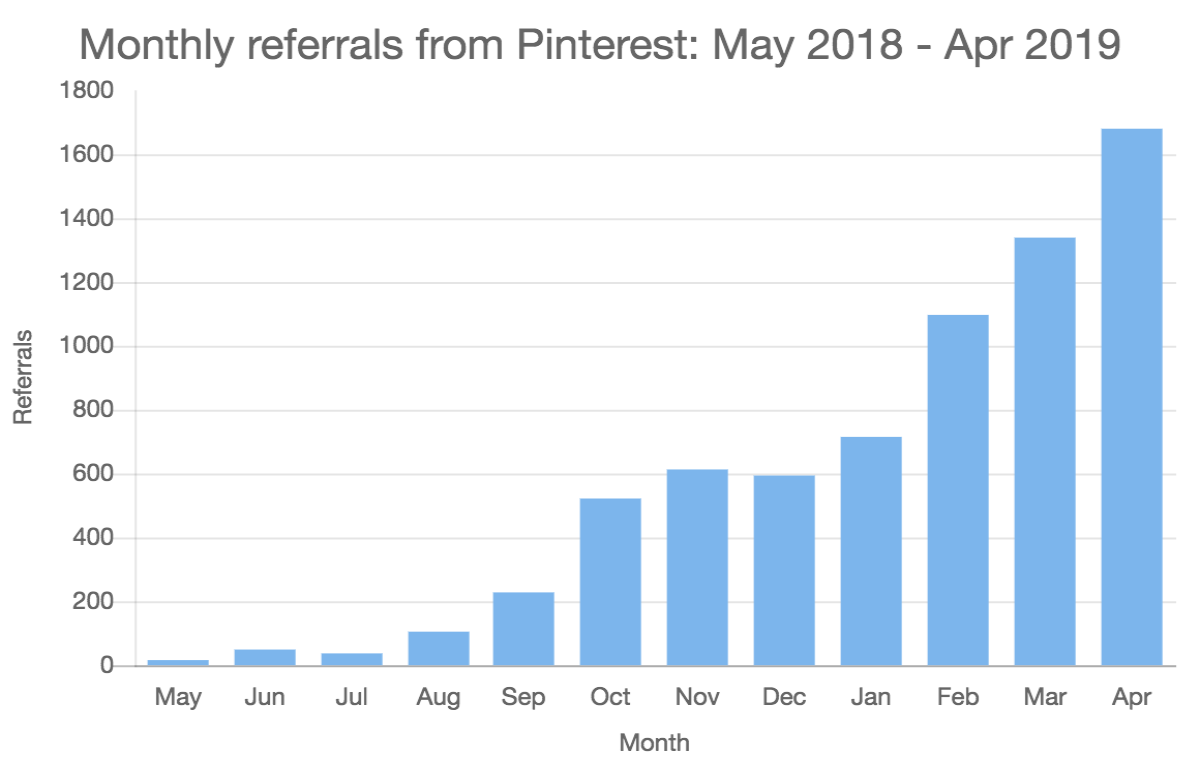 We ended the month on 1,680, more than 25% higher than our target of 1,250. I would love to offer an explanation of how this happened, but the truth is that we don’t know! Of course we will investigate this and will hopefully be able to shed more light on it in next month’s report.

Our growth in website traffic has helped to bring about an increase in email subscriptions. We picked up 30 new subscribers in April, bringing our total up to 227.

In last month’s report, I outlined how we were narrowing our focus to two specific affiliate programmes with high earning potential. In April we made our first sale on one of these programmes.

Although it was a relatively small commission for a short-term travel insurance policy, it’s great to get a sale on the board so soon after launching new content.

We’ve also made several sales across other affiliate programmes and increased our click-throughs across the board. We still haven’t reached a payout threshold, but – as with our website traffic – the movement is in the right direction, and we will get there if we keep going.

In March’s report I tentatively suggested that April could be our first month of making a profit. It turns out that was a little over-optimistic.

We had a paid guest post published towards the end of the month, but the payment won’t come through until May. Our various affiliate programmes are yet to reach a payout threshold, as I mentioned above, and our reduced hours have prevented us from pursuing alternative income streams such as selling travel photographs.

All of this means that we ended the month with no income. However, we remain positive, and – at the risk of sounding repetitive – we are playing the long game. Every month we get a little closer to our goal.

April was another low-spending month. These were our outgoings:

I haven’t included our Italy travel costs in the month’s expenditure. Although we did use the trip to gather new content, its main purpose was to have some time away and do a bit of travelling.

April’s expenditure brings our total business investment to date to £4,485.15

Priorities and targets for May 2019

After all the recent disruptions and distractions, we now have some open space in front of us for the first time in ages. Settled into our new environment, and with no trips abroad for a few weeks, May will be a chance to get back to the groundwork of blogging.

A primary focus will be on content: writing up the Italy trip, completing the mega-article I mentioned earlier, creating some more affiliate-focused articles, refreshing old posts and analysing the progress as we go.

We’ll also put the foot back on the pedal with backlink generation and guest posting, begin the process of reviewing our website and branding, and look into alternative income generation sources.

It feels like the right moment to be a little bolder with our monthly targets. We’re aiming for significant increased growth in May:

The task of building a blogging business can be scary, and even demoralising. There are times when it feels impossible. You have great days, massive downer days and everything in between. But every once in a while, something small will happen to remind you that you’re onto something good.

Yesterday one of these moments happened. We published an interview with a friend and old work colleague of mine and Lisa’s, who took a travel career break ten years ago. When she shared the article on her Facebook page, a friend of hers – who Lisa and I do not know – commented to say what a coincidence it was, as she has used our website on several occasions.

The thing is, we know just by looking at our traffic stats that there are plenty of people out there who are visiting our site. But this was the first time we’ve actually seen a complete stranger say they’ve been using our content. Not only that, but she’d returned to use it again. For some reason, seeing one person say this was a far greater boost than seeing twelve thousand page views on an analytics screen.

Little things like this can put the spark back into your step when you need it most. Now let’s channel that energy and see where it takes us. 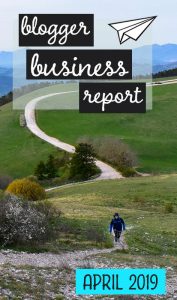