KK to Brunei and back by ferry and bus: it’s complicated!

I was beginning to think that travelling had become a little too easy. Most places we’ve visited have been well connected and clearly signposted, and language barrier has rarely been an issue. Then we went to Brunei.

A tiny oil-rich nation on the island of Borneo, Brunei is perhaps most renowned for its ruling Sultan, who, before Bill Gates sprouted onto the scene and the Internet exploded, was once the wealthiest person in the world. What it is not famous for is tourism. As inaccessible as it is alcohol-dry, not too many travellers go out of their way to visit. There’s plenty there to see and do for people who make the journey, however – check out this article on things to do in Brunei for some ideas.

Our decision to travel to Brunei was rather a spontaneous one. We weren’t planning to visit Borneo at all, but when we decided to shoehorn the Philippines into our plans, we found that the cheapest way to get there was via Kota Kinabalu (KK) in Malaysian Borneo. We booked the flights before the prices had a chance to rise (book now, fix it later is fast becoming our travel motto).

This gave us a five-day layover in KK, a place we had heard very little about, other than that the Borneo jungle wasn’t too far away. I looked at the map to find out more. Tracing my finger to the left, I came to a border… “Lisa,” I said, “shall we go to Brunei?”

The combination of intrigue and the sudden opportunity to bag another country was overwhelming. We booked two nights in a place called Banana Homestay & Hostel, which we since discovered has closed down. It was actually more like a small hotel rather than a hostel, and was the only place we could find in Brunei’s capital, Bandar Seri Begawan, remotely compatible with our budget (it was a few kilometres from the city centre, but book now, fix it later).

With accommodation booked, we then faced the not insignificant problem of how to get there. A little research uncovered four feasible ways to get from KK to Brunei, each with its own challenges. The first is to fly; out of the question for us, at around 80 pounds sterling each for a one-way, 40-minute flight. The second is to take a bus; this was worth considering, but the advantages disintegrated the more we read about the hassle involved. Although just a five-hour drive, the journey could take double that – on notoriously bumpy roads – because of eight stops on the way for customs checks and passport stamps. Eight!

This is because the road between KK and Bandar crosses several borders as it passes between the Malaysian states of Sabah and Sarawak, into the Bruneian exclave of Temburong, back into Sarawak, and finally into the main part of Brunei. This daunting stop-start bureaucracy also ruled out the third option, which is to drive. We could rent a car for just 30 pounds sterling a day in KK, and the allure of another roadtrip was tempting, but we didn’t want to run out of stamp space in our passports and have to order new ones!

This left us with the fourth and final option; a combination of ferries and public transport buses. So there we were, bright and early on a Thursday morning, cruising in an Uber from our hostel to Jesselton Point ferry port in KK.

Journey one: KK to Brunei

We were in for an epic day of transit, which went as follows (at the time of travel the exchange rates were roughly 5.5 Malaysian riggits and 1.85 Brunei dollars to 1 pound sterling):

Relieved, we settled into our room before heading out in search of money and nourishment. On my maps app, I found an ATM a couple of kilometres away. Thankfully it worked, but we were getting concerned at the lack of shops or restaurants. Away from the city centre, we had seen nothing.

Near the ATM we came across a petrol station. The staff could see the disappointment on our faces when we discovered that the shop didn’t sell any food and drink, and the manager came out to ask if he could help.

“Somewhere to buy food and drink?” I asked. He looked at me blankly. I gestured to indicate eating and drinking, rubbing my belly. He smiled. “My car!” he said. “This way!”

He led us to the rear of the petrol station and invited us to hop in his vehicle. Lisa and I looked at each other in apprehension for a moment. The guy was clearly genuine, though, and besides – it was this or go hungry for the night. We went for it. He drove us back past our hostel and dropped us next to a shop and a restaurant. We couldn’t thank him enough.

The restaurant was a small, homely place called Tati’s Kitchen. The woman running it welcomed us eagerly and recommended dishes. I had a Thai-style beef soup, and Lisa fried chicken kuey teow – both were excellent. We trudged back to the hostel as the sunset prayer calls blared out, feeling exhausted but satisfied, and just a little bit surreal.

The next morning we awoke refreshed and determined to make the most of our full day in Brunei. The reception guy had obviously had a good breakfast; he was far more helpful this time, and ordered us a taxi into the city. The drive to the centre cost 11 Brunei dollars.

We began at Sultan Omar Ali Saifuddien Mosque; as it was a Friday we couldn’t go inside, so we contented with wandering around the exterior and walking across the nearby bridge for a postcard view of the stunning, gold-domed building.

On the other side of the bridge we started along a wooden boardwalk leading into a water village. On the far side of the river we could see the colourful, stilted houses stretching out of sight in both directions; we were looking at Kampong Ayer, the biggest water village in the world, home to some 30,000 people. A small taxi boat (more like a canoe with an engine) pulled up at a nearby jetty and its captain hailed us; we paid him 1 Brunei dollar each to take us across to the heart of the village.

Close up, many of the houses appeared fragile and water-worn, while rotting boardwalk planks creaked precariously beneath our feet. With a single family’s wealth making Brunei one of the world’s richest countries, it felt sad to see so many people living this way; yet, the residents around the village seemed happy and at peace with their lot in life.

We explored Kampong Ayer for about an hour before taking another taxi boat back across to the main bank. With the hour approaching noon, we scouted around for places to eat; plenty of restaurants and cafés were open and full of life. But as the clock struck twelve, everything began to close. This is what we hadn’t realised about Fridays – the whole city shuts down for two hours at midday for prayers! Within a few minutes the streets were completely deserted, shopfronts shuttered up. You could film a zombie movie and nobody would notice.

This placed us in a quandary, with rumbling stomachs, our last drop of water just finished, and the midday heat pounding down. Surely a shop somewhere would be open? No. Nothing. We walked all over the city centre, past malls, through markets, across parks – not a sign of commercial life anywhere. We later found out that it’s actually illegal for any business to be open between 12noon and 2pm on a Friday in Brunei. We resigned to the wait, and found a suitable park bench.

When 2pm came around and the city returned to life, we made for Tamu Selera, an outdoor food stall complex mirroring the hawker style of Singapore. We greedily devoured noodle soups while stray cats prowled around for scraps. After paying the 8.50-dollar bill for our food and coffees we thanked the staff and left, being careful not to disturb the cats mating behind my chair.

With the main sights ticked off and a couple of hours to kill before the last bus, we made a stop at the free-entry Royal Regalia Museum. Like most official buildings in Brunei, we had to take our shoes off to enter and put some slippers on. We also had to leave our phones, camera and bags in a locker.

The museum is basically a giant, expensive homage to the sultan. An extensive exhibition of photos and artefacts tells the story of his life, from education to coronation to domination. The Bruneian royal class has quite the fetish for gold; thrones, swords, cups, chalices and all manner of gadgets of the glittery stuff were proudly on show.

Upstairs, we found an array of glass cabinets exhibiting a miscellany of extravagant gifts given to the sultan from all over the world. An entire floor of the huge building was required for this display alone. Pendants, city models, sculptures, paintings, and many more trinkets of gold. Any one of these gifts, I thought, could probably pay for the whole of Kampong Ayer to be renovated and fitted with power supply.

Feeling more humbled than dazzled, we called it a day and made the pink-campervan-bus journey back to our hostel, ate once again at Tati’s Kitchen, and got an early night ready for the long journey back to KK.

Journey two: Brunei back to KK

With the only morning ferry leaving Muara Port at 8:30am, we had to make an early start. We took a 6am taxi from our hostel to the bus station, which came to 15 Brunei dollars, followed by the 6:45am bus to the port, another dollar each. We made it just in time to book our tickets for the ferry, which were 17 dollars each, inclusive of port tax. In a last-minute scramble I had to change up some ringgits as we were a dollar short.

We made it into Labuan by 10am and booked our tickets onto the next available KK ferry, which didn’t leave until 1:30pm. This final leg of the journey was 39 ringgits each, inclusive of port tax. We stuck our big bags into a left luggage service for 3 ringgits each, allowing us to explore a bit while we waited. Three hours is an awkward amount of time to spend in Labuan, as you can’t do any activities in that time – we made do with a coffee and an Indian buffet lunch.

It was 5pm when we finally cruised back into Jesselton Point. Our excursion to Brunei had taken three days, two of which were spent in transit – a lot of effort to see a place with very little activity to offer western tourists. But in a strange way, this was perhaps the most authentic travelling experience we’d had since setting off from London last June. Sometimes it’s more fun when you don’t have everything on a plate. 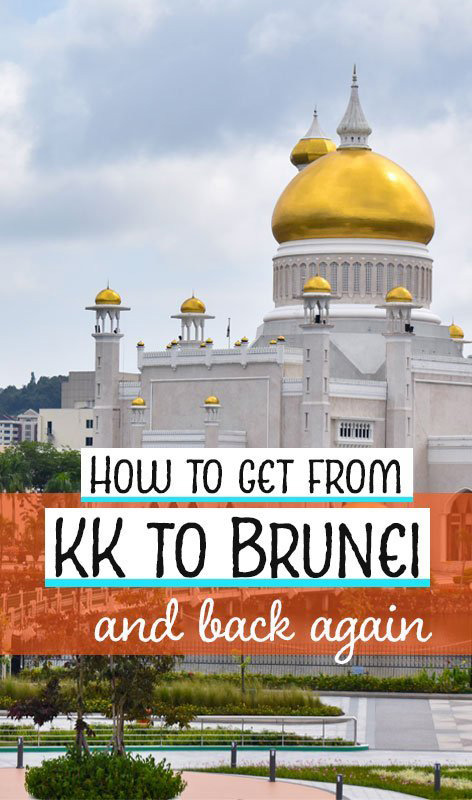 4 thoughts on “KK to Brunei and back by ferry and bus: it’s complicated!”