9 best hawker centres in Singapore (and some dishes to try!)

Hawker stalls are part of the cultural fabric of Singapore. Selling a variety street food that reflects the city’s multicultural society, you will find them organised into rows in large centres dotted all around the city. What’s more, they are super cheap! By eating entirely at hawker centres during the time we spent in Singapore, we were able to eat as cheaply as anywhere else we have travelled in Southeast Asia. Here is our guide to the best hawker centres in Singapore to help you find your way around the culinary highlights.

This article contains links to recommended food tours, from which we may make commission at no extra cost to you.

Street food in Singapore is organised into large courts of individual ‘hawker’ stalls. The ‘hawker’ name derives from the days when food vendors would sell their specialty dishes on the city’s streets, shouting to compete for attention. Over time, the vendors congregated into dedicated complexes where they no longer needed to shout to attract punters, but the name stuck.

You will find these hawker complexes all over the city offering the full spectrum of Eastern cuisine at prices you might expect to find in other Asian destinations with cheaper reputations.

In fact, Singapore is the only place in the world where you can buy Michelin-star food for just a couple of dollars. The local favourite Hawker Chan was the world’s first street food outfit to receive the coveted accreditation in 2016, and has since opened restaurants around the world.

It perfectly possible to find your own way around Singapore’s hawker stalls, and this article helps you to do that. But there are also benefits to taking a guided tour. Although it’s a more expensive way to do it, you get a much greater depth of knowledge about the cultural history and typical cuisine through the insights of a local guide.

These are some of the top guided food tours in Singapore that include visits to hawker centres:

The best hawker centres in Singapore

These are our picks for the best hawker centres in Singapore, based on our own experiences during our time in the city and recommendations from our readers.

We began our own Singapore adventure by taking a free walking tour of Little India, which, after guiding us through the area’s beautiful streets and temples, conveniently finished in the renowned Tekka Centre at precisely lunchtime.

The Tekka Centre is a large complex packed with shops, food markets and hawker stalls almost exclusively selling Indian cuisine, distinguishing it from other hawker centres in the city. At the culmination of our walking tour we were given a free sample of dosa pancakes with curry sauces, and with our appetites suitably whetted, we decided to stay on for lunch.

With so many vendors selling such an enormous variety of food it can be difficult to choose one, but we found that a surefire winning strategy was simply to go for the stall with the longest queue. In this case, it was Ar-Rahman Royal Prata. Its speciality dish is roti prata, a fried flatbread originating from Southern India. Absolutely delicious.

A little further away from downtown on the eastern side of the city, the Old Airport Road Food Centre occupies the former site of Singapore’s first civil airport. In the 1970s the location was reimagined with the opening of the hawker centre, which now features 168 food stalls.

The Old Airport Road Food Centre was even voted Singapore’s best hawker centre by a popular local radio station. In our experience it’s always a good sign if it’s a local favourite! In addition to the hawker stalls, there is also an upstairs section with a market for general shopping after you’ve had your fill.

To help you pick out the top stalls at Old Airport Road, this article highlights 17 of the best.

As I mentioned earlier in this article, Singapore is home to a hawker stall that has gained worldwide acclaim. Hawker Chan started out as a humble vendor in Singapore’s largest hawker complex, but drew international attention when it became the first hawker stall in the world to be awarded a Michelin star. Paying a visit to this legendary stall is a must to include in your Singapore itinerary.

While cruising around the Chinatown Complex Food Centre and trying to figure out which of its 260+ stalls we would choose, we chanced upon an abnormally large queue. After weaving through to the head of it, our curiosity turned to delight when we discovered that it was none other than the original Hawker Chan stall!

The food is simple and perfect. The chicken and rice is the signature dish. We opted for chicken with hor fun noodles and a large plate of seasonal veg to share, for which we paid just 9 Singapore dollars in total. Feeling greedy, we also bought a side of 10 steamed dumplings from China La Mian Xiao Long Bao. Quite simply the best dumplings I’ve ever tasted.

As we left the complex, we spied across the road the Hawker Chan restaurant that had been opened on the back of the hawker stall’s success. It was really great to see that despite the hype, the chef has stood by the formula. With such worldly recognition and demand skyrocketing, he could raise his prices by four or five times, but instead he has remained true to the stall’s philosophy and continues to sell his prize dish for 3.50 Singapore dollars. Fair play.

With our modest travel budget, we expected Hawker Chan to be our last Michelin-rated food experience for a long, long time. Amazingly, we were proved wrong the very next day just a couple of blocks away. We ventured back into Chinatown to check out the Maxwell Food Centre, another of Singapore’s highly rated hawker complexes. Sticking with our foolproof stall selection strategy, we soon found the longest queue, and it was another whopper, stretching well into the streets outside. We had stumbled upon Tian Tian Hainanese Chicken Rice – a hawker stall featured in the last two Singapore Michelin Guides!

As with Hawker Chan, the signature dish is very straightforward – boiled chicken served with oily rice, cooked with garlic and ginger in the chicken juices. This was our most expensive hawker meal at 17.60 Singapore dollars – but still pretty cheap. While some pieces were a little bony, the chicken was succulent and flavoursome, and the rice cooked to perfection.

Amoy Street Food Centre is one of Singapore’s most central hawkers centres, located in the heart of the downtown business district. Found on Maxwell Road, it is a close rival of the Maxwell Food Centre, and features well over 100 stalls. It gets especially busy at lunchtime, so aim to get there early if you can.

You can always find a long queue at Yuan Chun Famous Lor Mee on the second floor. The family-run stall has occupied this slot since a short time after the centre opened in 1983. It’s one of six stalls in the centre featured in the Michelin Guide – you can find the rest of them here.

One evening, after hiding out at Gardens by the Bay during a torrential downpour, we made our way over to one of the city’s most famous hawker centres, another one located in the heart of the business district: Lau Pa Sat. Set in an orderly, octagonal market building, Lau Pa Sat comprises over 100 neatly organised hawker stalls on the inside, while at night the outside area sparks to life with sizzling satay barbecue and speciality seafood stalls.

We arrived a little while before the street coals were lit, and so we ventured inside and perused the entire circuit twice before finally settling on Kang Lu Healthy Carbs. It’s slightly pricier than some, but, craving vitamins, we were drawn in by the pictures of giant vegetable portions served with the main dishes.

Lisa went for salmon and rice, I for chicken and noodles, and the vegetable portions didn’t disappoint. While this wasn’t the most remarkable hawker food we tasted, it filled a hole more than sufficiently.

On our final night in Singapore, we returned to Lau Pa Sat at dusk, feeling that we couldn’t leave without trying chilli crab and barbecued satay sticks. This was not a backpacker-budget-friendly venture, but possibly the cheapest way to eat chilli crab in the city – we paid 49 Singapore dollars for a medium-sized crab to share, served with hot bread rolls, and supplemented with 10 satay sticks for another 7 dollars.

This is a highly satisfying and worthwhile indulgence if you’re willing to get your hands messy – prising open crab claws dripping with hot sauce can be a tricky business.

One of Singapore’s oldest hawker centres, ABC Brickworks Centre was built in the early 1970s – and a few of its stalls have been there since the beginning. It is located a few kilometres west of the central business district in the Bukit Merah district, close to the Queensway Shopping Centre.

The building was actually once the site of Singapore’s first brewery, Archipelago Brewery Company, which is where it derives its name. Check out the video above to see some of the top stalls and dishes to try at ABC Brickworks.

Just across the road from ABC Brickworks, Alexandra Village Food Centre is another large and popular hawker centre in the Bukit Merah district.

You will find laksa all over Singapore, but this hawker centre is one of the only places where you will find it served in a claypot. Head to stand 01-75 and that’s exactly what you will find at Zhen Shan Mei Depot Road Claypot Laksa, the dish bursting with flavour and spices.

For some inspiration on some more off-beat stalls to try, here’s a guide to some of the hidden gems at Alexandra Village Food Centre.

This final gem on our list is smaller than the others we’ve highlighted and located a bit further off the beaten path in Serangoon Gardens, out in the city suburbs to the north of downtown. It’s not too difficult to reach, situated about 20 minutes’ walk the Lorong Chuan MRT station.

Serangoon Gardens is a laid-back district known for its hipster hangouts and quirky cafés. Chomp Chomp is a highlight, and a place to try some of the best local dishes in an open-air setting.

This is a hawker centre to visit later in the day, as most stalls only open in the evening. It starts to get busy from about 6pm onwards.

Chomp Chomp is a great place to try many of Singapore’s local favourites, such as hokkien mee, satay, BBQ seafood, and even fried carrot cake. Here’s a guide to some of the must-try dishes at the centre.

Map of the best hawker centres in Singapore

You can see the hawker centres highlighted in this article on the map below:

Looking for somewhere to drink in Singapore too? With the spare change you’ll save from the hawker centres, you can check out some of the most legendary bars in Singapore afterwards. 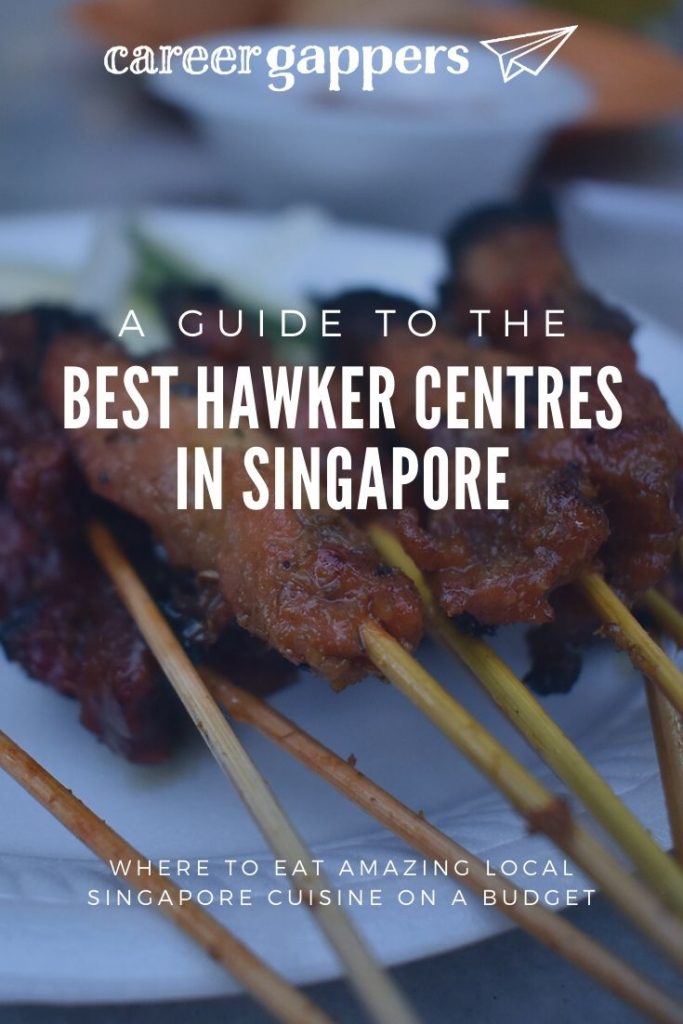 3 thoughts on “9 best hawker centres in Singapore (and some dishes to try!)”