We haven’t veered away from our original travel plan too often, but that changed quite spectacularly one day in Melbourne. We were fixing activities for our east coast roadtrip and had just booked deals for Fraser Island and Whitsundays, when the tour agent asked us: “how about an introduction scuba dive on the Great Barrier Reef?”

The price seemed good, it fit in perfectly with our route and we were on a roll, so screw it, we booked it. A month later, when the day arrived, we were somewhere in that sweet spot between fear and excitement, our pre-dive nerves and eager anticipation competing for supremacy.

Scuba diving is not for everyone. Many people struggle to get past the unnatural initial discomfort of breathing underwater. For me, the most difficult aspect of this is the sensation that infests the air spaces in your head when they are compressed by the pressure of the water. If you have problems with ‘equalising’ – that is, adding air to those spaces to ease the discomfort – it is the probably most difficult barrier you will face in learning to scuba.

We were in a group of four for our introduction dive (widely known as ‘Discover Scuba’). One of the group, a girl from the USA, didn’t get more than a metre before the surface before aborting mission and shooting back up.

This was my biggest worry. I had actually done a Discover Scuba dive many, many years ago in Jamaica, and while I eventually did get over it, I had lots of problems with equalising. It’s especially challenging when everyone else in your group finds it easy – you feel like you’re holding the group up. Luckily, this time, I found I could equalise quite easily; not by the usual method of pinching your nose and blowing gently, but by swallowing and wiggling my jaw, similar to the way I relieve pressure when ascending in an aeroplane.

On a Discover Scuba dive you can only descend 10 metres, but this was enough to get us completely hooked. After the dive, Lisa was absolutely buzzing. “I want to do it again!” And so did I.

It just so happened that we were about to embark on a four-month traverse of south-east Asia, one of the very best regions of the world to explore the oceans, and among the cheapest to take certification courses. The first diving destination on our route was the Indonesian island of Bali, where we had flights booked for an eight-day stay. Later we would be going to Thailand and the Philippines, both of which are also renowned as hotbeds for diving, and so if we were going to be serious about this, it made sense for us to take our PADI Open Water qualification in Bali.

We got to work and researched dive centres. Bali’s prime location for scuba diving is Amed on its east coast, which is rich with clear waters, a diversity of marine life, and points of interest like the US Liberty shipwreck. We booked our course with Bali Reef Divers, which offered a very good package including a free bonus dive for 4 million rupiahs (about 210 pounds sterling) each. We also booked to stay in the dive centre’s resort, Puri Wirata, which for 500 rupiahs a night allowed us to be based on-site, with a four-poster bed and ocean-view balcony.

Taking our course at the beginning of February, we were in Bali’s off-season, which worked to our advantage. The centre was so quiet that our tuition group was just me and Lisa. Our instructor, Anna, originally from Belgium, was the dive centre manager.

We couldn’t have asked for a better instructor. On the first day the pair of us arrived tentatively early and fraught with nerves, but Anna soon set us at ease with a patience and consideration that saw us through the whole experience.

PADI Open Water focuses on understanding the risks and dangers involved with scuba diving, learning how to stay safe, and how to handle emergency situations. The course typically takes three days, beginning with pool exercise in confined spaces before venturing on to ocean dives, and working through theory materials in the evenings. We’ve seen courses that cram it into two days, but we certainly felt it would be better not to rush it. The more we learned, the more we realised that this was not just a box to tick so we could get out onto a diving boat.

Everyone will face their own personal challenges with scuba diving. In the beginning I tended to flap about a lot, and Lisa struggled a little with buoyancy. With each instance of difficulty, Anna encouraged us to remain calm and focused; feeling comfortable and reassured, we were better equipped to deal with the problem.

Our last day of tutored ocean dives was exhilarating. We dived to the US Liberty, our first experience of a shipwreck. There is an eeriness and majesty about seeing a giant sea vessel submerged on the ocean bed that just cannot be recreated by photos and videos. To cap this off, while we were down there, we saw our first sea turtle – a beautiful beast called Lucy that lives around the wreck.

Afterwards, we drove a short distance along the coast for our final tutored dive. Just as we descended, a light patter of rain started rippling the water. The transformation in weather in the 45 minutes we were underwater was incomprehensible. As we resurfaced, sheets of water were pounding down, the sky had been completely encased by angry black clouds, and the shore illuminated with throngs of lightning.

We trudged clumsily up the rocky shore to a shelter, under which a crowd of people were huddling away from the elements. I didn’t think it was possible but the rain came down harder and harder. Hurriedly, we got the equipment into the van and set off back towards the dive centre. Floods of slurry gushed from the hills across the main road and down towards the ocean, causing chaos for the locals who were becoming stranded on scooters.

“Is this weather usual?” I asked, assuming that it must be. But Anna and the guys from the dive centre hadn’t seen weather like it before.

Half an hour later we arrived back at the centre, sodden with rainwater, adrenaline pumping – almost forgetting that we had just a couple of hours before our final exam. We dried off, wolfed down some lunch and crammed in some last-minute revision.

I think this was the first exam paper I had taken since I graduated in 2005. The preliminary jitters were no different. We did it, though; I scored 98% and Lisa 99%. We were certified scuba divers!

We celebrated straight away by hanging out with Manis, the dive centre’s adorable resident kitten. The guys had found him on the point of starvation and adopted him; it made our stay even more enjoyable to play with Manis after getting back from a day’s diving.

The next day we headed out for our free dive on a Japanese wreck nearby, with a new lease of freedom. It felt like the beginning of a new adventure with so many possibilities ahead of us.

I write this three weeks later from the Philippines, where we have already done another nine scuba dives; we still get those preliminary nerves every time, and yet we still love it a little more after every different experience. Next, we’re booking to take our Advanced Open Water qualification in Thailand, which will enable us to descend to a depth of 30 metres, as well as trying night dives. Further ahead we are looking to Egypt, and perhaps even the UK’s murky waters, which would require us to take special training for diving in dry suits.

The most special thing is that wherever we go next with scuba diving, it’s something we will experience together. As diving is carried out in pairs, or ‘buddies’, it’s one of the best things you can do as a couple. You’re looking out for each other, taking care of one another and at the same time discovering a new world together. And I know that for us, there will be many, many more dives to come. 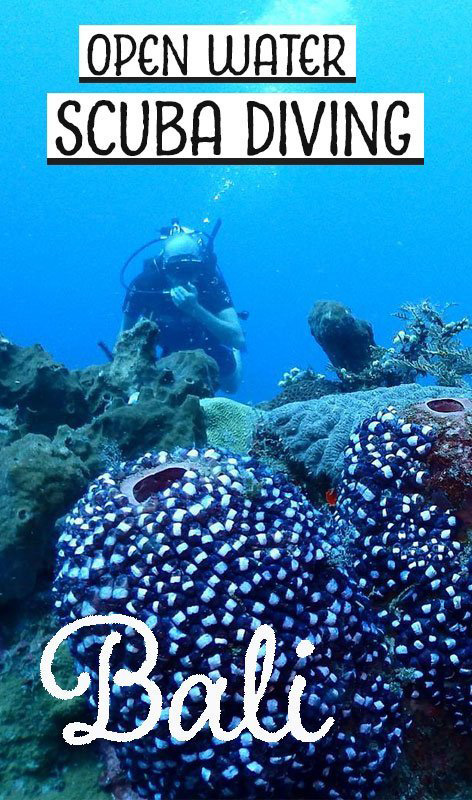