15 beautiful lakes in South America to visit on your travels

Water thrives in South America. The continent is home to the world’s highest waterfall, largest river by volume and greatest uninterrupted stretch of rainforest. It’s little wonder, then, that this place of spectacular natural beauty is also bestowed with some of world’s finest lakes. Here we compile the most beautiful lakes in South America to inspire your future travels.

From the most famed South America lakes to the hidden gems in the mountains and wilderness, there’s something here for all travellers, whether you’re a regular sightseer or a keen offbeat adventurer. Lisa and I have visited the majority of the lakes in this compilation on our travels, but I’ve also thrown in a couple that are high on our ever-growing South America bucket list.

Time to jump in…

Lakes in South America: the big ones

We begin with one of South America’s household-name landmarks and the largest lake on the continent. Lake Titicaca is also the world’s highest navigable lake, sitting at nearly 4,000 metres altitude straddling the border of Bolivia and Peru.

Titicaca is not just a natural spectacle, but also holds a special place in the region’s history as a focal point of the Inca civilisation. On the Bolivian side you can visit the islands of Isla Del Sol and Isla De La Luna and explore archaeological ruins against the backdrop of snowy Andean mountains. Our guide to the lakeside town of Copacabana explains how.

The city of Puno is an alternative gateway to the lake, located on the Peruvian side. Here you can enjoy the lakeside markets and restaurants, streets lined with Spanish colonial architecture, and take a trip out to the Islas Uros – floating islands constructed from reeds by the local indigenous community.

The mother of lakes in Argentina’s Lake District, Nahuel Huapi stretches over 500 square kilometres, surrounded by postcard scenes of mountain and Valdivian Rainforest.

San Carlos de Bariloche is built on the lake’s southern shore. This pretty city is the ideal launchpad for exploring the lake and national park – Argentina’s oldest – with which it shares its name.

About 15 kilometres or so to the west of Bariloche, you can take a chairlift or hike up to the summit of Cerro Campanario for a gorgeous panoramic view of the lake from 1,000 meters above. Check out our guide to things to do in Bariloche for more activities around the lake.

The town of El Calafate is the most popular spot for visiting the lake, and also the pivot point for trips to the glacier. The town itself is built on the lake’s shores. See our guide to things to do in El Calafate to explore Lago Argentino and the wider area.

El Peñón de Guatapé, or the Rock of Guatapé, is one of Colombia’s most photographed natural landmarks. The giant rock sprouts high into the sky, surrounded by the emerald green waters of Guatapé reservoir. Not one we’ve visited yet, but we’ll be there as soon as we make it to Colombia!

The Guatapé region is located about 80 kilometres from Medellin, making for a perfect scenic day trip from the city. It’s possible to climb the 700-odd steps to the top of the rock for a view out across the impressive man-made waterways.

Guatapé town is, by all accounts, a charming and colourful place to stay for a while on the reservoir’s edge. Check out Along Dusty Roads’ guide to the town’s highlights.

This rich-red lagoon looks almost like a giant pool of blood in the Bolivian mountains. Located close to the country’s legendary salt flats, visits to it are often included in Salar De Uyuni tours.

Laguna Colorada is a natural habitat for flamingoes. You can expect to see flocks of the iconic pink birds bathing and splashing in the red water.

This is actually one of several different-coloured lagoons within fairly close proximity. Laguna Verde and Laguna Blanca (Green Lagoon and White Lagoon) are not far away, and are also typically included in tour packages.

The city-island of Florianópolis in Brazil is best known for its beaches, but it also features Lagoa da Conceição, a large freshwater coastal lagoon lined with densely vegetated hills and sandy lake-beaches.

We stayed for a couple of nights in the small hippyish town of Lagoa right by the lake. In the evenings, crowds would congregate on the grassy banks and we could hear the gentle murmur of communal chatter, guitar strumming and friends singing while strolling around the lake road.

In the daytime, Lagoa da Conceição springs to life with activity, with kayaks, paddle boards and sailboats filling up the water. It’s an all-round relaxed vibe that has a home-away-from-home feel to it.

The Atacama Desert in northern Chile is the driest place in the world outside Antarctica, but even this arid landscape features some alluring water masses.

Some 40 kilometres south of the town of San Pedro de Atacama is the saltwater lagoon of Tebinquiche. The turquoise waters of this lagoon are pretty cold at first dip, but so densely packed with salt that you can float freely on the surface.

Take a look at our recommendations on things to do in San Pedro de Atacama for more activities in the area, including some smaller and more remote desert lagoons.

You are spoilt for choice when it comes to picture-perfect lakes in Torres Del Paine National Park in Chilean Patagonia. Lago Grey has the imposing Grey Glacier at its terminus, while the shimmering waters of Nordenskjöld Lake seem impossibly green. Lake Pehoé, however, takes first prize for memorableness due to the classic image of Los Cuernos and the Paine Massif across its waters.

The much-celebrated W Trek multi-day trail begins and ends at opposite ends of Lake Pehoé. On the ferry between Pudeto and Paine Grande you get the full view of the massif from the heart of the lake. You can also catch some of the best lake views on the trail to Mirador Condor, one of the lesser-known Torres Del Paine day hikes.

At the deepest south of Patagonia, the Argentina city of Ushuaia is enshrouded by the dramatic bleak scenes of Tierra Del Fuego National Park. A short shuttle ride from the city centre takes you to the Alakush Visitors Center at the heart of the park, a hub for a multitude of trails, short and long.

One of the shortest and easiest trails from the centre leads to the eastern edge of the Lago Roca. The still, dark waters of the lake stretch out towards a striking landscape of snowy peaks in the distance. You can continue walking on a gentle path around the lake’s edge, taking in these gloomy but formidable surroundings.

Check out our guide to things to do in Ushuaia, which includes guidance on trekking around the various lakes in the national park.

One of our biggest regrets from the time we spent in Chile is that we missed out on a trip to Pucón to see Villarrica Volcano. This vast, snow-doused conical volcano is one of the country’s most recognisable landmarks, standing above a lake of the same name.

Pucón is about 750 kilometres by road from Santiago and the perfect stop-off point if travelling from the capital down to Patagonia. It has gained renown as a hub for adventure sports, much of which is focused on the presence of the lake. The vast water provides a playground for aquatic skiing, sailing, windsurfing, rowing and fishing, all under the watchful eye of the mighty volcano.

With the notable exception of Lake Titicaca, many of Peru’s inland lakes are small, high inland features dotted among the country’s vast expanse of mountains. One of the most beautiful examples is Lake Parón, sitting at 4,200 metres altitude in the Cordillera Blanca range.

Lake Parón (also known as Laguna Parón) is a four-kilometre stretch of pristine azure water in the midst of towering mountains. It is the culmination of a popular 20-kilometre return hiking trail, often done in preparation and acclimatisation for the multi-day Santa Cruz trek.

You can find more Peruvian lake hikes in the Huaraz region and elsewhere in our Peru trekking guide.

One of Ecuador’s seemingly endless supply of natural wonders is the volcanic crater lake of Quilotoa. This magnificently photogenic green body of water was formed after the volcano last erupted over 700 years ago, leaving a three-kilometre caldera in its wake.

The crater lake is the focal point of one of Ecuador’s most sought-after treks, the Quilotoa Loop, which typically takes three days to complete. Don’t worry if trekking isn’t up your alley though, as it’s not the only way to visit the lake. You can take a day trip from the capital Quito or stay nearby in the town of Quilotoa.

Lakes in South America: off the beaten path

This is a lake we stumbled on completely by accident during our road trip in the Salta region of north-west Argentina. On the drive between Salta and Cafayate, we noticed a large body of water on the map not far from the Ruta 68. So we took a detour to check it out.

Soon we reached the edge of a vast expanse of deep blue water ornamented by blooming flowers and greenery around its banks. We found a great spot to park up and have a picnic, and some quick research told us we had found Cabra Corral Reservoir.

The reservoir is a beautiful contrast to combine with the red-rock desert scenes of Quebrada del Rio de las Conchas (Gorge of the Sea Shells), which comes a little further down the Ruta 68. And if you want to add a dose of adrenaline to the trip, the reservoir is also a popular spot for bungee jumping, especially at weekends.

Colombia’s largest natural lake, Tota, is located in the Boyacá region, high in the Andean mountains. Although treasured by the local communities it is something of an undiscovered gem for foreign visitors. The lake is set among tranquil nature and features one of the world’s highest beaches, Playa Blanca, a flawless stretch of white sand at over 3,000 metres altitude.

Like its Scottish counterpart in Loch Ness, Lake Tota is believed by some to be home to a mythical beast. The Muisca indigenous people have passed down a legend for centuries that a giant fish-like creature with the head of an ox resides beneath the water’s surface.

Lake Tota is close to the city of Sogamoso, which can be reached in about four hours by bus from Colombia’s capital Bogotá.

For the final lake in this collection we return to Argentina’s Lake District. Lago Gutiérrez is a peaceful, sleepy alternative to some of the more popular lakes and other natural spots in the region.

Visiting the region in the cross-over between the skiing and trekking seasons, we took a short day hike from the base of Cerro Catedral Alta ski centre down to the northern shore of Lago Gutiérrez. This end of the lake has a serene pebble beach, a lovely spot to stop for a picnic. You can also continue walking on an easy path around the lake’s edge, which leads into a forest and to the gentle waterfalls of Cascada de los Duendes.

You can see the locations of this collection of lakes in South America on the map below:

Read our guide to the best small group tours in South America for organised experiences, including Lake Titicaca and Argentina’s lake district. 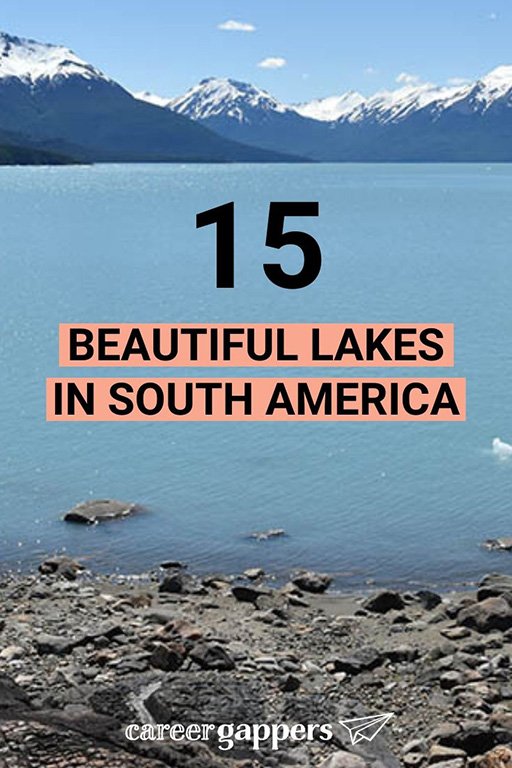