Southern Thailand isn’t only about islands and beaches. For hiking and outdoors enthusiasts, the region offers an abundance of forest terrain and hilly scenery to explore on foot. Our favourite was the trail to Dragon Crest Mountain, Krabi, which yielded one of our most special Thai memories. If you’re like us and you want some respite from the beach-hopping, sunbathing and full-moon parties, this guide explains everything you need to know about one of southern Thailand’s most beautiful hiking trails.

This site contains links to travel services we love, from which we may make commission at no extra cost to you.

Krabi is a province located on the mainland of southern Thailand, facing west into the Andaman Sea. It’s a popular stop-off for backpackers traversing between the islands in the Andaman, like Koh Phi Phi and Koh Lanta, and the islands in the Gulf of Thailand to the east, such as Koh Tao and Koh Phangan.

We sojourned in Krabi en route from Koh Phi Phi to Koh Phangan for a three-night interlude during our travel career break. We chose to station ourselves at Ao Nang Beach, a popular, pretty coastal spot that makes a great base for exploring the region.

While many of the tours and activities from Ao Nang focus on other nearby beaches and small islands, we were pleased to find some great options for inland exploration too.

The national parks in the southern Thai mainland are awash with lush vegetation and rocky hills that sprout from the ground like great islands in the green wilderness. Dragon Crest Mountain, also known as Khao Ngon Nak or Hang Nak, is one of the best vantage points for witnessing this scenery, and an enjoyable hiking trail.

The route is around four kilometres from the starting point to the top viewing point. For the full eight-kilometre return hike it’s best to allow at least four hours.

How to get to the Dragon Crest Mountain trail

Dragon Crest Mountain is located in Krabi province around 15 kilometres north-west of Ao Nang beach, slightly inland from the coast.

One option for hiking the trail is to take a guided tour, which usually includes lunch and transport. There are several tour companies along the main beach road at Ao Nang that offer packages.

Shop around for the best tours

If you opt for a tour, don’t take the first price that is offered to you. At the first place we inquired, Dragon Crest was advertised as a return tour with lunch included for 1,600 baht per person. When we walked away, the woman at the desk soon offered it to us for 1,000 baht each.

Another trick to look out for is the inclusion of a ‘national park entrance fee’. The tour rep assured us that this was also included in the price.

“How much is the entrance fee if we don’t take a tour?” I asked her. She looked blankly, shrugged, clearly wasn’t expecting the question… “I don’t know,” she said. “But 200 baht maybe. The minimum is 200 baht.”

This turned out to be a complete fabrication. When we hiked the trail on our own, we found there was actually no entrance fee at all.

If you want to try the hike independently – which we highly recommend – There are two main options for reaching the starting point.

The first is to hire a moped. There are plenty of companies that offer moped hire around Ao Nang. After having a sketchy experience with hiring a moped in Phuket a week earlier, we opted against this.

If you do hire a moped, be sure to inform yourself about road safety in Thailand beforehand. The country’s roads are among the most dangerous in the world. Before you ride off, inspect the moped and take photos of any damage to avoid being scammed.

It’s also wise to invest in travel insurance. We met many people who got injured coming off bikes in Southeast Asia; you don’t want to be lumped with a huge medical bill. We recommend SafetyWing Nomad Insurance as our preferred insurance company for career break travellers.

The second option for reaching the Dragon Crest Mountain trail is the one we chose: hiring a private car. It’s not as cheap as taking a moped, but for many people (like us) it’s the more comfortable option!

Just as with tours, it’s best to shop around for private cars. After trying a few companies and negotiating the price, we paid 1,200 baht for a return private car to the trail, including pick-up from our hostel.

The drive from Ao Nang to the starting point takes about half an hour and traces the coastline, offering some fabulous ocean views along the way. If you’re coming from Krabi town, the journey is around 40 minutes by car.

How difficult is the hike?

The Dragon Crest Mountain trail is to an elevated viewpoint, and as such it’s a simple up-and-down return route. The path is mostly well maintained and easy to follow, although in places we found ourselves poking around to find the way due to a lack of signage.

If you download the Ao Nang map on the maps.me app before starting, you shouldn’t have any problems staying on course.

The uphill section is unrelenting and steep in places, and so you need a reasonable level of fitness. Be careful in the few parts where there are rocks and tree roots to clamber over.

Overall, it’s a challenging physical hike but not a technically difficult one. We saw people of many ages and sizes on the ascension with tour groups as we were making our way back down. Get a good night’s sleep the night before, take your time, and you shouldn’t have any problems.

Timing the hike to perfection

Without a doubt the best time of day to hike Dragon Crest Mountain is in the morning. By doing this you avoid the midday and afternoon heat, and can witness the views in optimal natural lighting.

The trick to avoiding the crowds is to get there first. When we were shopping for tours in Ao Nang, we noticed that most of them departed at 8:30am. For this reason we arranged our pick-up for 7am, meaning we would miss the big groups, and we would also do the most difficult part of the hike before the sun could unleash its full fury.

From about 9am, the trail starts to get busy as the tour groups arrive. Because we were 90 minutes ahead, the route was wonderfully peaceful. On the way back down, we passed a lot more people-traffic coming in the opposite direction.

A word of caution: unless you’re a super-fit regular hiker, allow at least four hours to make the return hike. Our private car driver tried to convince us beforehand that three hours would be enough. We bartered with him to allow three and a half hours, and afterwards realised that we should’ve pushed for longer. (He clearly just wanted to be freed up to do another job.)

We went at a steady pace on the way up, and it took us about one hour and 45 minutes to reach the top viewpoint, with some short stops for rests and photos. We were constantly wary of the time at the top and on the way down, and as a result we weren’t able to relax and take photos as much as we’d have liked.

Arriving prepared for the trail

There are a few things to know before you attempt the hike that will make it an altogether more enjoyable experience. Some of these we realised after making mistakes ourselves.

It’s best to wear sturdy shoes for the trail. You don’t need full-on hiking boots, but at the very least wear trainers. We did it in our walking flip-flops, which we came to regret. We found ourselves slipping and tripping a lot in the rocky sections that required some scrambling.

Once the sun is aloft, it gets pretty hot on the trail. Wear sunscreen and bring plenty of water to keep yourself hydrated. We took six litres to share between the two of us, and only had a few drops left when we got back to the trailhead.

Finally, make sure you use the toilet at the starting point before you get going. There are no toilets once you’re on the trail.

Making it to the top

Our morning ascent was beautifully tranquil; we were alone with nature and the enchanting sounds of the forest for most of it.

About half way to the top there is a lower viewpoint that gives a little taster for what’s in store ahead. Wonderful, green-and-blue-drenched views of luscious forestland stretching across the coastline.

The views at the very top are nothing short of spectacular. You can see scores of islands out in the Andaman Sea in one direction, and acres upon acres of inland vegetation and hills across the other.

The best viewing areas at the top are a little bit scary; they are essentially giant slabs of rock overhanging clifftops, with scant footholds and jaw-dropping slopes over the edge. As long as you are careful with your footing there is no danger, but it’s not for the fainthearted.

This is one of the best photo opportunities in southern Thailand; you’ll want to hang around for a while before making back down towards the starting point.

It’s a satisfying feeling to look out on that view after conquering the uphill trail to reach it. It’s all downhill from here too, and the return path is a much quicker one.

Where to stay in Ao Nang Beach

We spent three nights in Ao Nang at a local hostel that we’ve sadly heard since has closed down during the pandemic. But there is still a good range of budget accommodation in the town if you’re looking after the pennies. You can check out the best hostels and hotels in Ao Nang on booking.com.

Are you planning some scuba diving while you’re in southern Thailand? Read about our experience of taking our advanced SSI diving course in Koh Phi Phi.

For more inspiration in planning your Thailand trip, read our other articles: 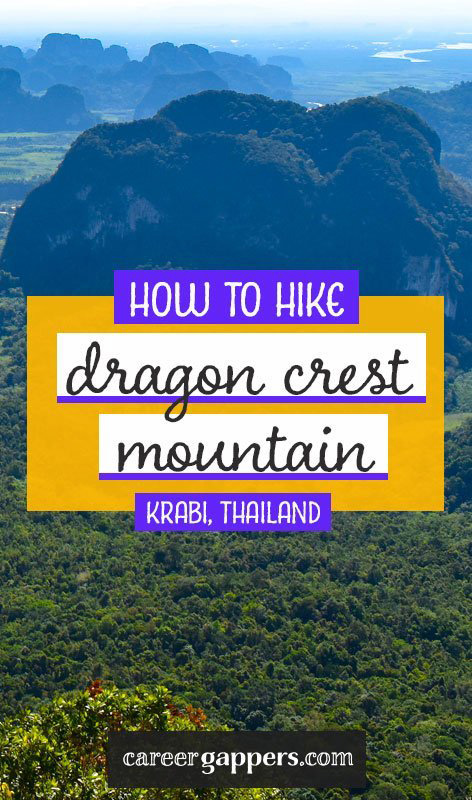