Half my life ago, as a starry-eyed 18-year-old boy, I had my first experience of travelling and it blew my mind. But when I went on another long trip overseas in my mid-30s – an ‘adult gap year’ – the experience was somehow a much more fulfilling one. Exploring the world can be incredible at any time of your life, but there are many reasons why you just can’t beat travelling in your 30s.

When my best friend and I traversed Europe via Interrail for a month as 18-year-olds, it was my first serious time away from home, and I loved it. I could go where I liked and stay out late without fear of what my parents would say. I met people whose boldness and free-living nature filled me with awe. I saw places that had previously only existed to me on TV screens and the pages of books. Whatever the ‘travelling bug’ was that people talked about, I had caught it – but I didn’t think it would take another 16 years for me to go on another big adventure.

Now, after returning home once again, I reflect on five things that make travelling in your 30s amazing – and also why it can be difficult.

Why travelling in your 30s is better

1.  You appreciate it more

In those years between backpacking at 18 and setting off once more at 34, I concocted many plans to hit the road again. But life always found a way to obstruct them. Lost jobs, financial difficulties, broken relationships, competing ambitions.

Once Lisa and I set our sights on a year-long career break in our 30s, it still took five years of saving and planning. But looking back on the experience now, I’m actually grateful that it took so long to come about.

“I can now appreciate what a luxury it is to have extended time off work.”

First and foremost, after the years of failed plans and unrealised dreams, I knew just how lucky I was to be travelling again. Every moment mattered. Travelling at 18, I flew through each day as though there were a million tomorrows. But as a thirty-something, I am acutely aware of how quickly life can take over, and I know this might be the last chance I ever have to do something like this. Consequently, I savour the experience of travelling more than I would have at any earlier stage of my life.

What’s more, having been in full-time employment for the best part of 15 years, I can now appreciate completely what a luxury it is to have extended time off work. My first travel came before I had barely done a hard day’s toil, other than a few bitty part-time jobs.

For my European adventure at 18, whilst I put some of my own meagre savings into it, I also relied a lot on help from my family, and a cash gift that my grandfather had put in a bank when I was born. There aren’t many people who can afford to fully self-fund a backpacking trip at that age; the majority of gap year students receive support from elsewhere.

Conversely, all of the travel that Lisa and I experience now, whenever backpacking in our 30s, is funded by cash we’ve earned ourselves and diligently saved.

We saved for many years to take a travel career break, making many sacrifices along the way. As we continue to travel whenever we can, we pay for it through our own hard work.

There is something much more satisfying about spending money you have earned yourself. You understand what has gone into accruing it, and you savour the rewards at the end of it. As an 18-year-old backpacker I didn’t quite get that.

3.  You can (probably) afford to do more

The chances are that as you progress further in your life and career, you will have more disposable income. This isn’t true for everyone of course, but it’s a likely trajectory as you gain more working experience and ‘climb the ladder’.

While there are many ways to travel cheaply or even freely these days, having more money makes it less stressful and means you can indulge more. You can afford some of the big experiences that may have been out of reach when you were younger.

We decided to spend more time saving for our gap year in our 30s, for precisely this reason; we wanted the financial freedom to enjoy it more. It meant we could do things like the Inca Trail (which I could barely dream about as a tight-up 18-year-old). We could treat ourselves to nice food when we wanted, and the occasional hotel room when we fancied a break from hostels.

4.  You’re more curious than ever

One thing I have learned is that a greater wealth of life experience enables you to get a lot more out of travelling. The older I get, the more comfortable I am in myself, and the more I find enjoyment in exploring the world around me.

The teenage me was on a voyage of self-discovery. But as a fully-fledged adult, you know much more about the kind of person you are, and the kind of people you like.

Don’t get me wrong: there is still an aspect of getting to know yourself while travelling in your 30s. I’m not sure that particular journey ever quite stops – but it’s never quite as intense as it was in those formative years.

As an older traveller, this means you can focus on enjoying the things you know you enjoy, as well as trying new experiences and learning new career skills.

5.  More people are doing it

Whenever we’re on the road, I am struck by how much the demographics of the travelling community have changed since that first trip when I was 18. Back then, many hostels were still called ‘youth hostels’, and almost every backpacker we encountered was on the fresh-faced side of 25.

Now, travelling has become a sport for all ages. For every gap-year or post-degree backpacker, we meet someone in their late 20s, 30s, 40s or older; usually like-minded people who we can connect with easily. And the travelling industry is catering for this shifting landscape more and more. (If we ever open the hostel we keep fantasising about, it will be focused on the older traveller!)

Here’s a real-life example. When we were in Fiji on our recent travel career break, we stayed for two nights at Beachcomber Island – a place known as a bit of a party resort. It’s basically a hostel with a dining area and a huge bar/club on a tiny island that you can walk around in ten minutes.

I had heard stories from friends who had been there years ago about how it made Magaluf look like a children’s birthday party (that turned out to be a bit of an exaggeration, but still… you get the picture).

We came to Beachcomber at what must have been a quiet time, with perhaps 20 people on the island. During our only full day there, we went snorkelling in the morning and rocked up in the bar before the bell rang for the lunchtime happy hour.

We soon got chatting with a couple from Derby in their 50s who were taking a three-month retirement holiday, an Essex gal in her early 30s, a 33-year-old New York firefighter who we had already met on another island (you can read more about his cool story here), and a Swedish woman in her early 20s.

We stayed in the bar all day with that awesome group of people from different generations and countries. It’s still one of our very favourite travel memories. Before that big trip, we were worried that we would always be the oldest people in the bar, but the reality was far from it.

The social side of travelling is perhaps where it gets more difficult in your 30s, or at least it has for us. While we do enjoy a drink, no longer is every day a party the way it once was. Inevitably this means there are nights we spend in our accommodation when we feel like the only people who don’t want to go out, and our emotions get stuck somewhere between fatigue and FOMO.

And, being a bit older, people make assumptions about you; particularly when you’re travelling in a couple. People are less likely to approach you. While on a ferry crossing we overheard someone say “I don’t usually speak to couples because they don’t like to socialise”. Not true! But these prejudices mean that it can be hard work to make friends.

But while the social aspect of travelling may not be as non-stop as days gone by, we still had a total blast and meet people from all walks of life, many of whom will be friends for a lifetime.

You don’t have quite as much energy

When I was 18, I could spend all day walking around a city, hiking, swimming, or doing some other physical activity, and still be bursting with energy at the end of it. I could go out for a heavy night and then wake up ready to do it all again the next morning. That’s not the case any more.

Each year that passes, it gets a little harder to keep up the pace. We take more rest days now when we travel. But that can be an enjoyment in itself. When you reach your 30s, you understand your limits better and you learn to pace yourself. And some of that energy is replaced by new-found resilience.

“When you reach your 30s, you understand your limits better and you learn to pace yourself.”

At 34 I completed the W Trek in Torres Del Paine, which was probably the greatest physical achievement of my life. This was a challenge that required mental stamina and endurance that I don’t think I was capable of in my late teens and 20s.

So, for every downside of travelling when you’re a bit older… there is usually a much better upside to counter it.

Maybe in ten years’ time I will be writing here about how great it is to travel in your 40s. Or maybe I’ll be taking my kids abroad and telling them stories about our days on the road. Who knows? What I do know is that travelling isn’t just a young people’s game anymore, and I will be enjoying it one way or another for a long time to come.

Love this? Pin it for later! 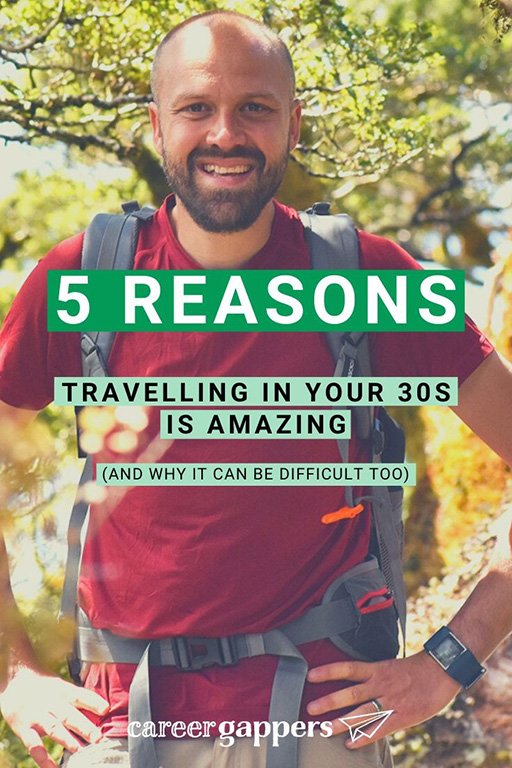 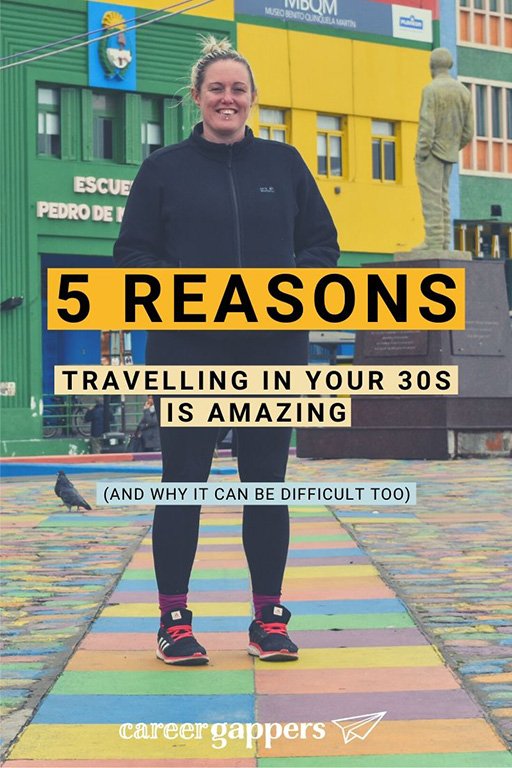