Valparaíso is one of the world’s most colourful cities. Spread over a cluster of hills overlooking the vast Pacific ocean, it is characterised by bright, many-coloured buildings and dazzling wall murals. We spent three days exploring the best of Valparaíso street art and the stories behind this Chilean city’s amazing creative culture.

To plan your trip to the city, see our tips on things to do in Valparaíso.

Valparaíso, or ‘Valpo’ as it is known to locals, was once one of the richest cities in South America. When shipping vessels from Europe made the journey around the southern tip of the Americas en route to the west coast of the USA, they would stop off in Valparaíso.

The second half of the 19th century was a golden age for the city. Its status as a thriving port brought many wealthy immigrants from Europe. Soon, beautiful Spanish and French architecture blossomed around Valparaíso. The naval community came to know it as “Little San Francisco” or “the Jewel of the Pacific”.

When the Panama Canal opened in August 1914, everything changed. European ships no longer needed to make the long journey around South America. The thriving commerce that had developed around the city’s port activity collapsed as quickly as it had grown.

One year after the Panama Canal opened, a certain Augusto Pinochet was born in Valparaíso. These two events shaped the destiny of the city for the next hundred years.

In the second half of the 20th century, Valparaíso went through a suffocating economic decline. Wealthy families moved away to seek pastures new. The city would need to reimagine itself if it were to stage a revival.

Pablo Neruda and the seeds of the Valparaíso art scene

Valparaíso’s journey to becoming the cultural capital of Chile began in the 1940s. It was around this time that muralism was beginning to flourish in Mexico.

At the beginning of the decade, a diplomat called Pablo Neruda – born in Valparaíso – was posted as Chilean Consul General in Mexico City. Taking note of the art movement, he decided to bring the influence home. When he returned to Chile in 1943, he invited Mexican artists to Valparaíso.

Pablo Neruda became a world-famous poet, winning the Nobel Prize for Literature in 1971. Today you can visit La Sebastiana, his residence in Valparaíso, which has been converted into a museum. The entry fee is 7,000 Chilean pesos.

Street art during the military dictatorship

The street art movement in Valparaíso bloomed in secret.

In September 1973, Chile was forcefully brought under the military rule of General Pinochet. Within days of the coup, Pablo Neruda died in highly suspicious circumstances.

The military dictatorship banned all forms of political art. Many caught defying this repressive policy were ‘disappeared’.

But many people saw art as the only way to express their beliefs. Valparaíso was the perfect place for this. On its narrow and concealed streets and stairways, artists could do their work and get away unseen.

An underground network of artists formed in the city, painting powerful messages on the walls its back streets. When doing so, they risked torture and death, and their murals were painted over when discovered by military police.

But the groups persisted and proliferated, and played an important role in returning democracy to Chile in 1990. Their work preserved hope, and emboldened activist groups to organise.

Legalisation of street art in Valparaíso

After the downfall of the Pinochet regime and the return of democracy in Chile, Valparaíso’s local government made street art legal in a move to celebrate freedom of expression. Everywhere else in Chile, street art is only permitted under formal commissions.

The local government has itself directly supported street artists to create new pieces. Hotels, shops and restaurants compete to have murals painted on their walls. Amicable rivalries have developed between street art crews based on who can create the most impressive murals.

The result of all this is that street art has become part of the city’s fibre. Valparaíso today is a perfect storm of colour that attracts art lovers from all over the world.

Discovering Valparaíso on a walking tour

We took two different walking tours in Valparaíso with Tours 4 Tips. The ‘highlights’ tour explores the city’s main attractions, while the ‘offbeat’ tour covers more of the quirky local spots, as well as a background on politics, history, food, and – you’ve guessed it – street art.

We’ve taken many walking tours around the world, and Tours 4 Tips was one of the very best. The young, local guides – or ‘Wallies’, as they dress as Where’s Wally – were extremely knowledgeable about the city and its history. At the end of the second tour we were each given a complementary local cocktail to try.

During the offbeat tour, we learnt about the 43 separate hills across which the city is spread. Each hill (or ‘cerro’) has its own neighbourhood and identity. While there is street art to be found all over the city, it is most prevalent in hill-neighbourhoods like Cerro Concepción, Cerro Alegre and Cerro Bellavista.

The hills of Valparaíso rise up sharply from the coastline. To ascend them you can take stairways, which are often covered with mosaics and paintings, or one of the various functional funiculars. The city’s oldest funicular, Ascensor Concepción, opened in 1883 and is still in operation today.

Journeying through the hills we saw how the city’s creative spirit is blended with its troubled past. Parque Cultural de Valparaíso is a former prison that has been converted into a community centre that hosts cultural events, supporting young talent.

As we descended Cerro Alegre on the stairway, we saw a stunning mural in full view on the side of a house. This was ‘Luz’, or ‘Light’, a piece by the Vida in Gravita crew.

Cuellimangui is a Spanish street artist who lives in Valparaíso, and has become a local legend. He has developed one of the most recognisable mural styles, often using a distorted tessellation of colourful monster-like creatures. We saw his distinguished works in many corners of the city.

We were lucky enough to meet Cuellimangui on the offbeat walking tour. While traversing Cerro Concepción, we encountered him selling some of his artwork on Paseo Atkinson, a walkway on the hill-front that looks out over the Pacific Ocean.

We decided to buy one of his pieces. After perusing his incredibly impressive portfolio on offer, we chose a beautiful assembly of marine and reptilian creatures, with a big green sea horse as its centrepiece.

At the time, we still had nine months of travel ahead before we would be home again, and so it was quite a commitment to buy mementos that we would need to carry around. We were delighted to make an exception for this, only to be gutted a few days later.

Shortly after arriving in Buenos Aires, we were robbed in a distraction scam. The Cuellimangui artwork was in one of the bags taken, and so it was gone. This was every bit as upsetting as the items of monetary value that we lost. One day, we will visit Valparaíso again and buy another one.

Valparaíso-born artists Sammy Espinoza and Cynthia Aguilera (nicknamed Jekse and Cines) are together known as Un Kolor Distinto. They are responsible for some of the biggest and most striking murals to be found around the city.

The duo were selected as the artists for a creative project entitled Solsticios y Equinoccios (Solstices and Equinoxes) financed by a regional cultural fund.

The project involved the creation of four giant murals on buildings up to 50 metres high, inspired by the themes of Spring Equinox, Summer Solstice, Autumn Equinox and Winter Solstice.

We found the Spring Equinox mural on the corner of Yungay and Morris, close to Mercado Cardonal and the main bus terminal. Emblazoned on the side of a 15-floor building, this is the tallest mural in Valparaíso.

Jekse and Cines explain the Spring Equinox mural as “the flowering of life and human beings, love, light and fertility of our planet”.
You can find the three other murals featured in the project at these locations:

There are many more works by Un Kolor Distinto around Valparaíso (you can see some in London, too). Earlier, during one of our walking tours, we passed a mural by the duo – also a commissioned piece – that depicted skulls rolling down the city hills, symbolising the suffering of the people during the military dictatorship.

The unmistakable style of Inti

One Valparaíso street artist who has garnered international acclaim is Inti. We came across some of his work before we visited the city; he was commissioned to paint two giant murals in the city centre of Santiago.

The work he produced invoked Ekeke, the god of abundance in Andean folklore, combined with symbolism representing that contrasts of prosperity and hardship.

In Valparaíso we spied an Inti mural spread along three long walls between red rooftops. This work also incorporated an Ekeko figure in Inti’s unmistakable puppet-face style. The three separate components showed the figure’s face and legs draped in various garments and ornaments, and an empty pair of shoes.

Inti has painted murals in cities all around the world. On his website you can see examples of his indoor and outdoor works, and on Street Art Bio you can see a really cool video of him creating the La Virgen de la Discordia mural in Puerto Rico.

How to get to Valparaíso

Valparaíso is located around 100 kilometres north-east of Santiago. The easiest way to reach it from Santiago is by bus, with a journey time of just under two hours and several services running every day.

The two main companies that operate the route are Pullman and Turbus. We found that it was fine to buy tickets at Estacion Central in Santiago on the day, although you can also book online in advance. Busbud is a really good service for this – we used it throughout our travels in South America.

For options for any budget or travel style, check out our guide to where to stay in Valparaíso.

We spent our three nights in the city at Casa Volante Hostal. This was a very pleasant, centrally located hostel just a few minutes’ walk from Plaza Sotomayor (the main square).

We had comfortable beds in a spacious dorm room, and were very happy with the facilities. There was a sizeable kitchen (and with a supermarket close by it was easy to prepare our own meals), as well as a comfy social area, strong wifi and good showers. The staff were very helpful in advising on things to do, how to get around and printing our tickets.

Are you spending time in Santiago before visiting Valparaíso? Check out our articles on things to do in Santiago and the Fuente Alemana sandwich joint.

If you’re travelling elsewhere in Chile, you may be interested in our two-week Chile itinerary for San Pedro de Atacama to Santiago.

We also have articles on San Pedro de Atacama, the Elqui Valley and the Torres Del Paine W Trek. For a complete travel guide to Patagonia, see our 28-day itinerary.

For help with planning your budget, see our analysis of our own Chile trip cost. 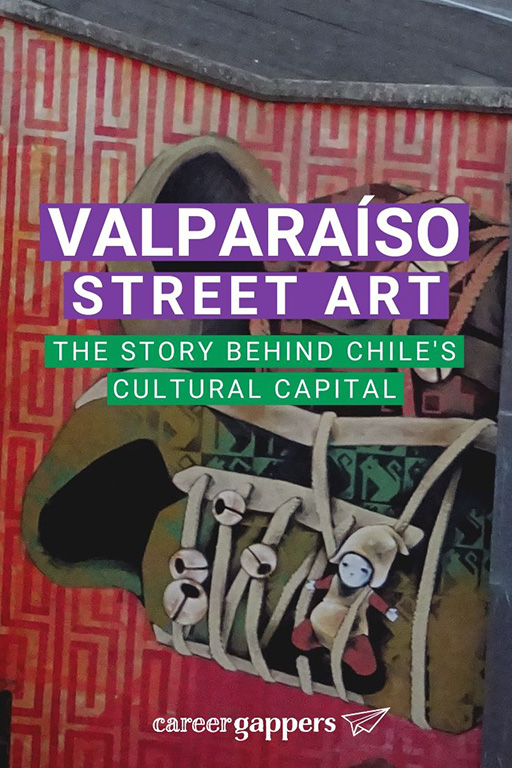