Slovakian food in Bratislava: what to eat and where to eat it

Slovakian food blends a mixture of influences from around Central Europe with its own very distinctive culinary character. A young nation with ancient roots, it has a proud tradition for hearty, delicious food made from ingredients hailing from the countryside. If you arrive in Bratislava with an empty stomach, you’re sure to leave with a full one.

Author’s note: while ‘Slovak’ is technically the correct term to describe someone or something from Slovakia, ‘Slovakian’ is also used widely. As such, I have used both terms interchangeably in this article in order that everyone looking for this information is able to find it.

We spent a few days in Bratislava, Slovakia’s capital, sampling some of the local dishes in various recommended restaurants. We returned home still full, but satisfied to the extent that we bought ourselves a Slovak cookbook to make ourselves some of what Brits might call ‘comfort food’ over the UK winter. In this article, we explore the highlights of Slovak cuisine and the best places to eat in Bratislava.

A quick guide to Slovakian food

Slovakia’s national cuisine is closely entwined with its rural, down-to-earth origins. Food in the country has always been about sustenance rather than indulgence. The farmers and peasants of old rural Slovakia built diets around whatever would keep them going in the fields.

As such, Slovak dishes tend to be cheap and easy to make, and wholesome to eat. Ingredients usually derive from the land, most commonly pork, chicken, potatoes, cabbage, peppers, cheese, fruit and bread.

It can be quite heavy going if you’re not used to this type of diet, so we would recommend trying a different dish each day if you’re new to it. If you order a starter and a main, you might struggle to finish (as we found out!).

It’s rare to find a restaurant in Slovakia that doesn’t offer soup on the menu. It’s an essential element of the country’s eating culture.

Soup served inside a giant bread roll is a common feature of Central European and Scandinavian countries. In Slovakia, krémová cesnaková polievka is a delicious version of this, comprising creamy garlic soup served in a bread roll. It’s great to see a dish served in an edible bowl.

This is a filling dish – we couldn’t eat much more afterwards. We ordered it with some other sides, and still couldn’t finish the delicious bread roll. If you want to try the creamy garlic soup but aren’t up for the carb overload, you can also order it in a standard, non-edible bowl with a few croutons.

For a lighter variation you can try cesnaková polievka, a clear garlic soup typically prepared with cheese and croutons in it.

A more filling soup, often eaten as a main meal, is kapustnica or sauerkraut soup. It’s a warming, hearty concoction of cabbage, onions, mushrooms, potatoes and smoky sausage. It’s the perfect hit if you need a comforting boost.

Finally, a mountain favourite, demikát is a soup made of sheep cheese. We tried this in a local restaurant in Ždiar after some mountain hiking, and we saw it on the menus in Bratislava. It’s an extremely filling, salty soup, but would be a great try for any cheese lover.

Dumplings made with potato or flour are a key feature of many Slovak main meals. In the simplest form, steamed dumplings are served with lashings of pork shoulder or knuckle and piles of cabbage.

An absolute must-try when visiting the country is bryndzové halušky (potato dumplings with sheep’s cheese, often topped with sour cream and crispy bacon pieces). It’s a homely dish with a sharp and tasty flavour.

A closely related dish with a similar taste is bryndzové pirohy (doughy, pierogi-style dumplings with sheep’s cheese). While pierogi is perhaps most often associated with Polish cuisine, it has roots across Central Europe. This Slovak variation incorporates the distinctive tang of sheep’s cheese. It was Lisa’s favourite dish of the trip, as it reminding her of a comforting plate of mac and cheese! Perfection for any hangover, or if you just need an injection of warmth.

As an alternative to dumplings, pancakes are a slightly less stodgy accompaniment for main dishes. Zemiakové placky (potato pancakes) can usually be ordered as a side, and are great for dipping in soup.

You may see these potato pancakes paired on menus with balkanska pochúťka, a stew of pork meat, tomatoes, peppers and onions. The stew is wrapped inside a large pancake with cheese sprinkled on top and salad to garnish. This was my my personal favourite of the dishes we tried in Slovakia. The ones we tried were usually served with a side salad, and with the pancake being as big as the plate you’ll probably want to rest a while afterwards and let it digest.

Slovakian food is a meat-heavy cuisine. The focal point of a meal is most often pork or game, complemented by a combination of dumplings, bread, cheese and cabbage.

In addition to the staples of pork shoulder, ribs or knuckle, roast duck breast is a slightly more deluxe option. Its rich flavours work perfectly with the fruity tang of cranberry sauce.

On appetiser menus it’s likely you will encounter pečená klobása (roasted sausage). Served with mustard, horseradish sauce and pickled chilli peppers, it’s a highly comforting and indulgent treat to kick off your meal. As Lisa observed, it “tastes like Christmas markets”. It’s pretty salty, so order a small dark beer to wash it down.

I’ve already mentioned how pierogi-style dumplings with sheep’s cheese are a popular delicacy in Slovakia. There are also examples of dishes more commonly associated with Hungarian and Czech cuisine prepared with a Slovak twist.

Hungarian gulaš (goulash) is hugely popular in Slovakia. There are different variations to be found throughout the country, but most revolve around the basis of pork, paprika, onions, peppers and tomatoes. As you may expect, the standard accompaniment is dumplings. We love this dish and we’re going to be making it again at home.

Svíčková na smetaně is a classic Czech dish consisting of beef sirloin in a creamy, peppery sauce served with cranberries, whipped cream, and – you’ve guessed it – steamed dumplings. It’s a well-liked dish in Slovakia, too, and available in many restaurants.

If you somehow make it through your main dishes and still have room for more (I’m genuinely impressed), there are several desserts you can try that are unique to Slovakia. Šúľance s makom (poppy seed dumplings) is perhaps the most popular.

Another dumpling-based dessert is slivkové knedle, filled with plums and dusted with sugar on top.

If you really can’t stomach any more dumplings, then štrúdľa (strudel) is a classic alternative. This sweet treat of apples baked in layers of puff pastry with sugar and cinnamon originating from the old Austrian empire is popular around the world, and a Slovak national favourite.

Best places to eat in Bratislava

Let’s get this straight: we are not luxury travellers. If you’re looking for fine dining restaurants where you can blow a millionaire’s weekend budget, this is not the article for you.

But if you’re travelling on a low-to-medium budget and want to know where you can sample the best of the city’s traditional cuisine without spending a fortune, then you’re in the right place. Read on!

We spent three days and nights gorging our way through Slovakian food in Bratislava. These were our favourite five restaurants that we tried during our trip.

Located on Obchodná, a hotspot for restaurants and bars just outside the Old Town, Slovak Pub is popular with both locals and tourists. It’s a labyrinth of small rooms and booths set inside a large building, with the feeling of an old-style countryside cottage.

Slovak Pub has a great selection of homemade Slovak cuisine, and the prices are very reasonable – other establishments that draw similar tourist crowds charge a lot more.

Viecha U Sedliaka is a much smaller and less discernible outfit almost directly opposite Slovak Pub on Obchodná. A quaint and homely place, it has intimate seating downstairs, and a larger upstairs area with tables looking out onto the street.

We had a hearty lunch at Viecha U Sedliaka of Slovak classics. We struggled to walk afterwards, but it was worth it! This was the best value traditional food we found in Bratislava.

You wouldn’t know it by looking from outside, but Flag Ship in Bratislava is one of Europe’s largest restaurants. After entering the modest doorway and walking through some passageways, you emerge into a giant restaurant  inside an old theatre.

Flag Ship is a great place to sample Slovak delicacies like homemade roast sausage with mustard and dumplings with sheep’s cheese. We tried a mixture of local specialities in a large sharing platter. It was a little pricier than Slovak Pub or Viecha u Sedliaka, but the food was great.

Prazdroj, located more centrally in the Old Town, serves wholesome Slovak classics in large, satisfying portions. It’s not quite in the same low-budget bracket as other restaurant we visited, but worth a stretch for a little treat.

The roasted duck with cranberry sauce was superb. The menu also has a section for Czech classics, so you can get your fix of svíčková na smetaně here.

We finished our Bratislava food trip in style with a slap-up, all-singing, all-dancing feast in Meštiansky Pivovar. Aside from being the oldest brewery in Slovakia, it also serves fantastic authentic Slovak cuisine. The brewery has two restaurants in Bratislava; one slightly outside the Old Town on Drevená, and the other round the corner from Hostel Blues (where we stayed).

The restaurant on Drevená is the only one that serves the traditional soups (as we found out by visiting the other restaurant and leaving, because Lisa really wanted to try the garlic soup in the bread roll!). We thought the traditional Slovak food here was the best we had in the city, and in particular the hard sheep’s cheese with forest chanterelles was outstanding.

Taking a guided local food tour in Bratislava is a great way to learn more about Slovak food before you explore the city’s restaurant scene. Here are three experiences you can book on GetYourGuide:

Have you had a taste of Slovak food in Bratislava? Let us know about your experiences in the comments below.

If you’re looking for things to do in Bratislava during your visit, take a look at our ideas and sample itinerary.

Want to try cooking up some international food in your own kitchen? Here are five dishes from around the world you can try at home. 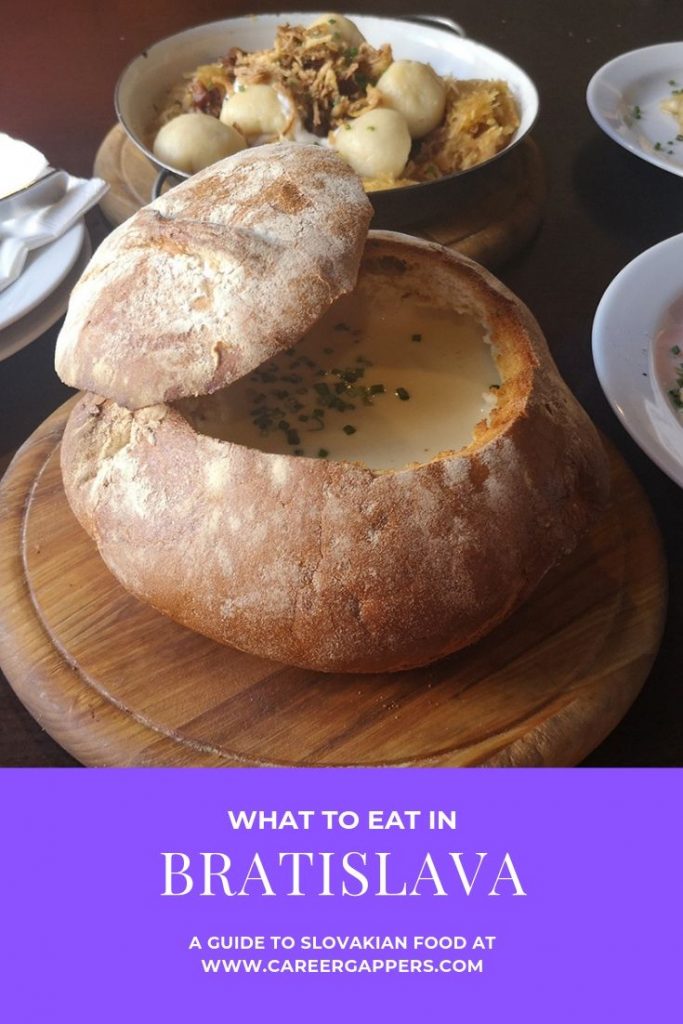