How I saved money to travel by quitting my permanent job

When Katie King, a 25-year-old communications executive from London, decided she wanted to take the plunge and travel to South America to intern, learn Spanish and travel, one of the first things she did was quit her stable, permanent job. She writes about how this enabled her to save more money for her trip, and the unexpected benefits of this important decision.

In January 2019, I decided I wanted to go to South America. Just for two weeks in early 2020, to potter around Rio and maybe see the Iguazu Falls. Now, this January blues-induced holiday idea has morphed into a four-month, round-the-continent career break.

I’m not quite sure how I got here. Practically, it’s because the person I was going to go on holiday with couldn’t go anymore, and by the time I’d done all the planning I’d become so engrossed in South America that I couldn’t just let it go. In reality, it was also probably a combination of feeling bored in my routine and wanting to do something freeing and totally different.

However it happened, I’m now just over two months away from my flight to Peru, where I’ll travel, go to a Spanish school and intern in digital marketing at an international charity.

I’ve never done anything like this before. Until the ‘I want to go to South America’ epiphany, I’d been extremely career driven, risk averse and, well, probably quite boring. Any time I’d entertained the idea of travelling, I’d punt for a dull work experience placement instead. No one was more shocked than me when I 180-ed on the travelling idea.

As for other people’s reactions, “how are you going to afford this?” is quite a common one. Perhaps surprisingly, part of my answer is leaving a stable, permanent job that I loved.

Taking a leap of faith

Last year, when I made the decision to travel, I had been working at a national charity’s head office in London for just over a year. The charity offered sabbaticals to people who’d worked there for at least two years. This made sense: it was a safe option and meant I’d have a job waiting for me when I got home.

But, and I struggle to explain why, it just didn’t sit right. I loved my job but I felt like my time there was coming to its natural end; I didn’t want to stick around for another ten months to reach the two-year threshold. It would also have meant going to South America in June 2020, at the earliest, and that didn’t really make sense with my tenancy ending in February.

At this point, summer 2019, I felt in a bind. I wanted to leave my job, but I didn’t think anyone would hire someone who could only commit to the job for a matter of months. Short-term work came up as an option, but I was sceptical. I’d recruited temps before and I knew the work could be precarious, certainly more so than the secure job I had at the time. But it was an option that I wanted to explore.

The next few weeks were spent calling recruitment agencies and speaking to everyone I knew who’d ever done any sort of temp work, to suss out whether it was a viable option. The thing that came through most strongly was that the interim market moves quickly. Temps are often brought in via an expedited interview process to cover unexpected staffing changes, so employers aren’t after candidates with a month-long notice period, which is what I had.

This was the most terrifying bit. If I was serious about moving into the temp market, I had to hand in my notice without having another job lined up. In the run-up, I had many sleepless nights worrying I was about to throw away a good, stable job and end up becoming unemployed, in a flat I couldn’t afford to pay rent on and saving nothing for the trip.

It took a lot of faked confidence to finally hand in my notice. After I did, colleagues asked: “where are you off to next?” I’m sure people must’ve thought I’d been fired when I told them that I didn’t know.

This was an anxious time. I started sending applications to recruiters and employers, but even with my notice period ticking down to about three weeks, many wanted people sooner. Another spanner in the works was that I had a two-week holiday booked with two school friends, tacked onto the end of my notice period, which means I’d be on the other side of the world at probably the most crucial point of my job search.

Thankfully, the stars aligned for me when I pinged over my CV to an employer advertising for a temporary job to cover some work while they recruited for three permanent positions. I was initially rejected, as I couldn’t start soon enough, but they called me just before my trip to ask if I’d come in for a few months to help out while the new permanent staff bedded in.

This meant I could head off on holiday knowing I had a job to go to when I got back. It also meant I had a two-week trip to bookend the part of my life where I was so aggressively career driven it led me to burn out in this way. It was the best two weeks of my life.

The benefits of life after stable employment

One of the biggest benefits of temping over having a permanent job is the money.

Short-term contractors are often paid by the hour or day, at higher rates than an equivalent permanent staff member would get. I’m now on my second short-term contract, and at both I’ve made approximately an extra £200 a month just by working the same hours. If you’re paid hourly and pick up some extra hours, the pay increase could be far greater.

I’m definitely saving more than before as well because I’m paid weekly; I find it much easier to save little and often, and without that week-before-payday gaping hole when I’d always end up dipping into savings.

While the extra cash is a hugely practical benefit, maybe even more important to me is that working in this way has built my confidence and hugely eased the anxiety I was feeling about the trip.

I’ve been at three different companies from October until now, which means starting afresh, meeting new people and getting stuck into something new feels like the norm. I also feel a lot better about finding a job when I get back. I know I won’t waltz into my dream, permanent job days after I return, but now that I’ve interviewed for temp roles (and know they’re not as difficult as for permanent roles) I feel much less daunted by the process.

And the bad bits…

Temping isn’t without its downsides. As you’re often not employed directly by the company you’re working for, you don’t get the same benefits as other staff such as annual leave and sick pay. Just keep everything crossed you don’t get floored by a severe ear infection in your first few weeks (like I did).

There are other benefits you take for granted as a permanent worker, like employee assistance programmes and staff discounts, that you may not have access to in the temp world.

And – temping isn’t a panacea. An extra £150-200 a month has pretty much doubled the amount I was saving for my trip, but it isn’t going to fund it alone. I’m trying to pick up freelance bits of work where I can and will be moving out of my flat in just a few weeks, which means I get my deposit money back. I’m also very fortunate that I will have about six weeks living at home with my parents, where I’m hoping to save like crazy before I head off.

But, it’s not just about the money. For as risk-averse a person as I used to be, handing in my notice without having another job lined up was probably the scariest and most out-of-character thing I could’ve done. Travelling feels much less intimidating now.

Taking this leap of faith has given me a taste of the freedom I was desperately seeking from my travelling adventure, and that’s more valuable to me than having an extra few hundred in my wallet.

Pin it for later 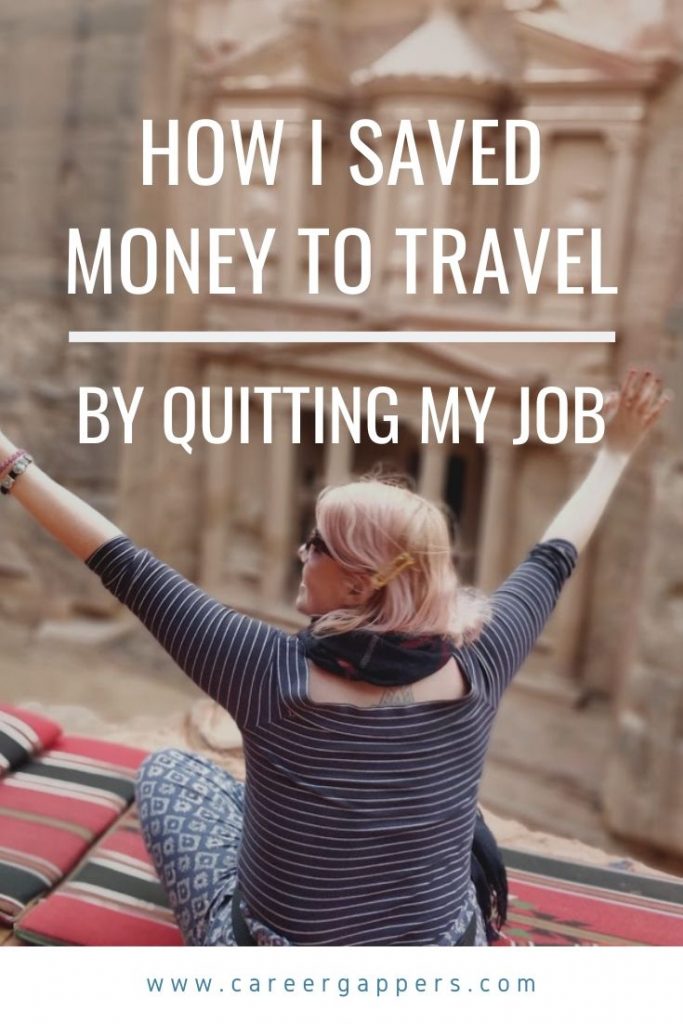 Katie works in press and communications for a non-profit in London, and has a background in law and legal journalism. She’s travelling on her own to South America for four months in 2020, starting in Peru and finishing in Argentina. While there, she’ll intern at a charity in Cusco for two months and, fingers crossed, brush up on her Spanish skills.