Learning to scuba dive is one of the most rewarding things we have done on our travels. We tried in on the Great Barrier Reef, earned our qualifications in Bali and Thailand, and did more dives in the Philippines. After returning home to the UK we didn’t want to lose this experience, and we have discovered that diving in Malta is a fantastic option close to home. It’s easily accessible from all over the continent, and is consistently rated as one of the best places to scuba dive in Europe.

Surrounded by pristine azure Mediterranean waters, Malta provides excellent diving conditions and high levels of visibility for exploring its marine life. Furthermore, the island nation’s history as a wartime battleground means that there are some really fascinating and authentic wrecks to explore.

We spent a great day scuba diving in Malta with Watercolours Dive Centre. It was an amazing feeling to get back in the water, and we’ve never been so well looked after by a diving centre before. Read on to learn about our experience, and a brief introduction to diving in Malta.

This site contains links to products and services we love, from which we may make commission at no extra cost to you.

Diving in Malta: an introduction

Owing to its strategic position in the Mediterranean sea, Malta is a great place to explore real-life wrecks in the wake of past battles and world wars.

There is an abundance of natural underwater life to explore as well; the country’s geological make-up provides excellent tunnels, caves and reefs.

A variety of these sites can be found at different levels, meaning there is something for beginners and advanced divers alike.

The wreck we visited while diving in Malta began at just six metres deep, so you don’t need an advanced certification to take advantage of what’s on offer. The crystal clear waters make you feel as if you are diving in an aquarium, which is excellent bonus for photography lovers.

Malta dive sites and what you can expect to see

The Maltese Archipelago is made up of three inhabited islands: Malta, Gozo and Comino. Each of these have multiple dive sites within close proximity, so you won’t waste a lot of your day travelling around.

There are some 100 dive sites to explore around the Maltese Islands. The top spots include:

Best time for diving in Malta

It is possible to dive in Malta all year round – we visited in January, one of the coldest months. The best time to dive, however, is during the summer months from June to August, when the water is warmer and the seas are calmer.

Make sure to keep an eye on the weather. Malta’s location in the middle of the Mediterranean means that it can experience some pretty fierce storms. The most volatile weather occurs during the autumn months of September, October and November.

Keeping your holiday flexible and having regular communication with the dive centre will mean that you can plan the best day for your dive. From March to September it’s pretty much plain sailing, but it does get busier, so book in advance.

We really enjoyed diving in January because there were very few people in the water, and it meant that we had a small and focused group with our divemaster. We didn’t have to wait for groups and we could go at our own pace.

Watercolours Dive Centre is located on the north-east coast of Malta in Sliema. It’s located in a popular tourist area covered by several bus services, which makes it really easy to get to.

The centre has two training pools and a house reef, so you can go straight from the preparation area on the premises into the sea without having to travel around.

We were really impressed with the condition and quality of the equipment. Our scuba hire gear was easily the best we’ve used at a diving centre.

The staff are extremely experienced and care about the safety of their divers. After we finished our dives we told them how much we had enjoyed the experience, and it made them happy to see we’d had a great time. You can definitely see why it’s a five-star registered PADI dive centre.

We arrived in Malta on a Wednesday morning and dropped in to meet Jason, the centre’s director of diving, in the afternoon. Jason once took a career break himself, living in Australia for two years before returning to Malta to set up the dive centre, which instantly gave us something to speak about. He was super friendly and we had a good chat about some big topics including tourism and the economy in Malta.

The weather was looking pretty ominous – mainly because of the winds – so after looking at the forecasts with Jason, we decided it would be better to dive in a few days’ time and let the water calm down.

During our first visit we also met Sergio and Enol, who are the PADI instructors on site during the winter months. All of the team speak excellent English (as well as Spanish) and so we had no problems communicating from the beginning.

These first conversations instantly put our mind at ease; it had been 11 months since our previous dive, and we had been a little nervous. We felt reassured that we were dealing with a really experienced dive centre with extensive knowledge of the local surroundings.

We could have stayed chatting for ages but we had been awake since the early hours in the morning, so we headed back to our apartment to freshen up before dinner.

Our experience of getting back in the water

On top of our hiatus from diving, this was also our first dive in European waters, which added to our initial nerves. We watched some YouTube videos to refresh our memories on how to put the equipment together properly, and quizzed each other on some of the things we had learned in our PADI Open Water and SSI Advanced Adventurer courses.

Sergio took the lead on our first dive, and helped us get into our kit when the winds had calmed down enough for us to dive on the house reef. He was incredibly relaxed, which relieved any final nerves we had about using the equipment again. There was no pressure to rush.

For us, this made the whole experience much more enjoyable. After hitching on our BCDs, running through the hand signals and doing our checks, we headed down past the training pools and took a big step into the sea.

It was exhilarating to be diving again. And while the water was colder than we were used to in Australia and Southeast Asia, we’d been given all the equipment we needed to keep us warm.

This was our first time in thicker wetsuits, using a hood, vest and gloves. Sergio helped us to get our weighting right in order to compensate for the extra gear.

Establishing buoyancy after a long break was tricky and it took us a while to descend, but Sergio was helpful and calm in getting us under the surface. We swam through the ocean current and headed along the coast in the direction of some tunnels.

It was mesmerising to watch the long grass swaying in the current, and we started to swim through some caverns and rocks on the seabed. Turning a corner, we followed Sergio through a beautiful tunnel before doubling back. It was like we’d never been away from the water!

For our second dive, we headed down the road to Manoel Island, where we would see an authentic World War II wreck. This time Enol led the dive. He put our equipment in a van and we set off in glorious sunshine. On the way, he told us the story of the wreck we were about to see.

Built in 1915, the British X Lighter vessel was involved with the successful withdrawal of troops and horses after a World War I battle before arriving in Malta, where it was converted to carry fuel oil for the tenth Submarine Flotilla.

On Friday 6th March 1942, the submarine base was attacked and the X127 was hit by a Luftwaffe torpedo, catching fire before sinking in position.

We arrived and parked up next to a row of millionaires’ yachts and alongside an old hospital. The waters were much calmer, and the view across the bay to the sandstone buildings in Valletta was incredible.

We got all our equipment on (bring big towels if you need to change your underwear, as there are no changing rooms at this site!) and climbed down the ladder and into the bay.

Descending was much easier second time round, and we got going fairly quickly. The visibility was slightly murkier because it’s in a bay and the boats churn the water slightly, but it was still good.

We’re just swimming along and all of a sudden it comes into view. There’s nothing like that moment when a shipwreck slowly emerges into sight. This is an impressive ocean vessel, 35 metres in length and weighing 135 tons, now submerged on the seabed and slowly decaying.

On the dive, Enol took us down to show us the hole that still exists from the torpedo hit. In the right conditions you can penetrate this part of the wreck, but to do it you need to have your wreck penetration speciality. This is something we hope to go back and do with the awesome guides at Watercolours Dive Centre.

Surfacing with the Basilica of Our Lady of Mount Carmel (the giant domed building in the city of Valletta) in view, with the sun shining, was an excellent end to our day of diving.

Has this inspired you to get in the water? We hope it has! You can book your course, fun dives or dive packages online – just hit the orange book button and fill out the form.

Jason and the team are super responsive, and would he happy to hear from you if you have any questions before you book. Use the online contact form or pop in to see them. Watercolours Dive Centre is open all year round, so there’s nothing to stop you learning to dive or practising your existing scuba skills whenever you like.

Where to stay when diving with Watercolours Dive Centre

The closest areas to the dive centre are St Julians and Sliema. If you stay in one of these locations it will take you no longer than 15–20 minutes to walk there. And if you’re staying elsewhere, the bus service in Malta is frequent and cheap. We stayed in an Airbnb, as we wanted to have our own space for getting prepped and chilling out afterwards. Check out the best Airbnbs in the area or take a look at the map below.

We purchased a seven-day unlimited travel card for just €21. So if you want to stay in a quieter area, further away from the main tourist hubbub, you’ll be able to reach the dive centre on public transport without any hassle.

The team at Watercolours Dive Centre also specialise in organising dive package holidays for groups. So if you aren’t up for hunting for your own accommodation, the guys will organise everything from airport transfers and accommodation to restaurant bookings.

Our guide to where to stay in Malta covers the best areas around the islands along with our recommendations on hotels, guest houses and hostels.

Looking for ideas on how to spend your time in Malta? Check our our suggested itinerary for 3 days. You may also be interested to read our guide to Malta in winter, which includes more ideas for things to see and do.

Caught the scuba diving bug? You can read about our experiences of learning to dive in Bali and Thailand: 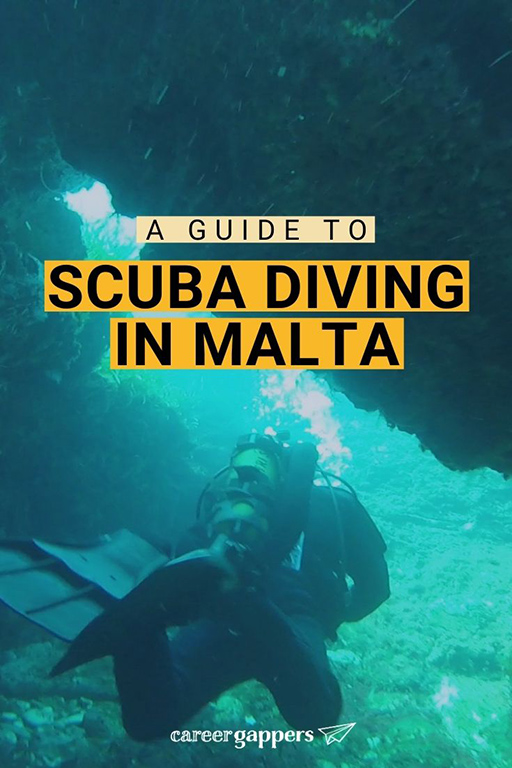