As a Brit, I learnt very little about the Vietnam War growing up. My only references came from American films like Forrest Gump and Full Metal Jacket. In school we were only taught about conflicts that directly concerned us, like the two World Wars.

I knew even less about Laos, a country basked in obscurity for westerners like me. When I visited the country recently, my eyes were opened. I was shocked to learn about how its people had suffered during the Vietnam War, and the terrible after-effects that continue today.

During a secret nine-year campaign from 1964 the USA carried out more than 580,000 bombing missions over Laos, dropping over 2 million tons of ordnance in the process. The purpose was to disrupt supplies and traffic through the ‘Ho Chi Minh Trail’, which ran along the Laos–Vietnam border. Laos became – and still is – the most bombed country in the world per capita in history.

Some 270 million ‘bombies’ – submunitions distributed from cluster bombs – were deployed over Laos during this period. It’s estimated that 30% of these devices failed to detonate. The consequences? Approximately 80,000 unexploded bombies remain scattered throughout the country. Half a century later, Laos remains a labyrinth of explosive danger-zones.

We visited the COPE Visitor Centre in Vientiane, the country’s capital, to find out more. I first heard about this place from Nathan Ang of the Shiok Travels blog, who writes about it in an itinerary of the city’s eastern circuit. Here, he describes the extent of the bombings in greater detail:

“The United State military … heavily bombed Laos with 2 million tonnes of explosives, which equates to a planeload of ordnance being dropped onto the country every 8 minutes for 24 hours a day, 7 days a week for a terrifying duration of 9 years.”

The victims of unexploded ordnance today

Since the bombing missions ended in 1973, over 20,000 people in Laos have been killed or injured by incidents involving unexploded ordnance (UXO). One of the most harrowing consequences is that many of the victims are children. The small, round explosives appear like toys to innocent young eyes.

Other common victims include farmers who unwittingly detonate devices when striking the ground with pickaxes, and families cooking meals outdoors, with heat from fires causing underground ordnance to expode.

COPE is a medical rehabilitation complex that provides services for people with disabilities. It trains local staff in prosthetics and orthotics, and supports the costs for people who cannot afford to pay. The COPE Visitor Centre is also a museum that tells the story of UXO – the main reason there is such a need for prosthetics in the country.

I have rarely been as moved as I was by the exhibitions at the COPE Visitor Centre. Contained within two small rooms, the museum recounts the war and its legacy through the stories of the victims.

The smallest room screens a documentary film exploring the repercussions of UXO. In one clip, a teacher tells a classroom of young children how to identify unexploded bombs. This almost brought me to tears. How do you answer their questions? How do you explain to children why these terrible devices are there in the first place?

In the main room I learned some victims’ stories. A wooden chamber displayed children’s drawings of family tragedies. Plaques on the wall told of UXO incidents, such as this one about Mr Ta:

“In 2004, Ta was out fishing with two of his sons, aged 8 and 10. He found a bombie lying on the ground. He knew that it was dangerous, but he had heard that the explosive made it easy to catch fish. He sent his children behind a tree and crawled up to the bombie.

As soon as he touched it, it exploded. His sons dragged him into a boat and rowed back to the village. In total, it took nine hours for them to reach medical help.

Ta lost both arms, an eye and all of his family’s livestock to pay for his treatment.”

The more I saw, the angrier I became. A display explained how cluster bombs are designed, and their intended effects. The fact that human beings manufacture these monstrosities is a tragedy in itself.

The COPE Visitor Centre also described the measures being taken to clear Laos of UXO, and worldwide efforts to avoid future situations of a similar nature.

Approximately a quarter of the villages in Laos are still contaminated with UXO, including 41 of the 46 poorest districts. To address this, surveys are carried out systematically, and village by village, hazardous areas are mapped to be cleared based on local and national priorities. But at the current pace, this work will still take decades.

On an international level, the Convention of Cluster Munitions is a global treaty that was adopted in 2008. As of March 2018, it is signed by 108 countries. My home country, the United Kingdom, was one of the original signatories, largely owing to its central role in the European Union, which encouraged all of its members to sign. The most glaring absence in the list of signatories is the USA.

There has been recent progress with Laos–American relations, however. In 2016, Barack Obama became the first US president in history to visit Laos. His visit focused largely on the ramifications of the Vietnam conflict. He announced that US aid spending in the country would be doubled for three years. But as US priorities have refocused from international to domestic issues with the recent change of administration, the future of this support is less certain.

We left the COPE Visitor Centre with fresh perspectives and heavy hearts. It was one of the most valuable educational experience of our travels, and something that everybody visiting the country should see.

A lot of travellers skip Vientiane on their Laos route, as it has a reputation for being a little dull. We often heard people say “just go to Luang Prabang and Vang Vieng”. Our experience was drastically different to this. Anybody who wants to learn about the country and its history should visit the capital, and in particular the COPE Visitor Centre.

How to get to the COPE Visitor Centre

The COPE Visitor Centre is located on Khouvieng Road in Vientiane, close to the Green Park Hotel. It’s about a kilometer away from the central bus station, and easy to reach by foot or tuk-tuk from city centre accommodation.

There is no entrance fee, but donations are welcome. You can find out more on the COPE Visitor Centre’s website.

For information on transport during your stay in the country, read our guide to getting around Laos. 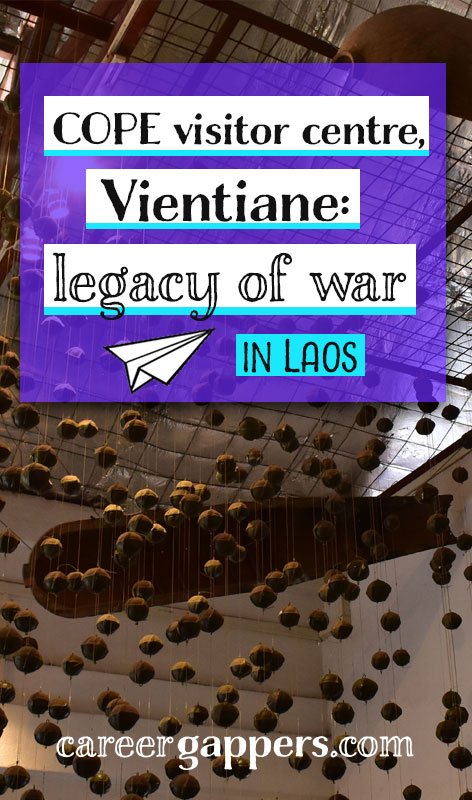