Sarah Prinz and her husband Sean loved their jobs and lifestyle in Boston. But when their honeymoon seeded an idea to take an extended travel break, they managed to carve out an even better pathway.

After travelling for three months through Europe and Asia, Sarah started a new venture as a wedding planner and a bridal wellness coach, and Sean landed his dream job. They now live in the New York City metro area with their puppy, closer to family and friends, and are enjoying life to the fullest.

In this interview, Sarah discusses the inspiration behind their travel career break, their most memorable experiences, and how it has helped them to design life on their own terms.

Sarah manages event details for a joyful and low stress wedding day, while curating a supportive journey of self-care for brides to be at honeycomb + prince.

What were your job situations before you took a travel career break?

I was working for a luxury venue in downtown Boston as an event specialist and Sean was the general manager of a restaurant. We both LOVED our jobs in Boston and really could have gone on for years without making a change, or trying to achieve more work-life balance.

Why did you decide to take some time out to travel, and what did you hope to get out of it?

We had been contemplating a move to the NYC area to be closer to family and friends, because we were feeling disconnected from the people who were most important to us, due to the distance and the lifestyle.

Sean had been in Manhattan for an interview and met up with his mom for lunch. I think he was expressing a general underwhelm about the current opportunities in NYC, and his mom actually suggested that we take some time off to travel.

On our honeymoon (which was about 18 months prior to this), we definitely felt the travel fever, and made a list one day of all the places we wanted to visit. We felt like during a time of transition and relocation, it would be a fun adventure to take real time off and get to see lots of the places on our list versus having to choose one destination every year or so.

How did your friends and family react to the decision?

All differently. Sean’s mom clearly was all for it. My mom, who has worked in the travel industry, was also in favour of this ‘once in a lifetime’ adventure.

Some people thought it was a careless decision and worried what we would do for work when we returned to the States – the mindset that it’s easier to get a job when you already have one. My dad, per usual, was concerned about our safety.

Some people accused us of avoiding being adults. Other people were jealous (maybe those were the same people!).

How about your workplaces – were they supportive?

My workplace was supportive. They understood it was time for me to transition out and to have a great adventure. Plus they knew I would make sure the transition was seamless.

I gave a few months’ notice and I’ve never worked harder to ensure that all of my clients (mostly brides) received a proper and thorough hand-off to my colleagues.

Did you have any big reservations about the trip?

YES. Actually when Sean first pitched the idea, I asked him why he was running from the responsibilities of adulthood. I was scared at the prospect of coming home from a long and expensive trip without a job or place to live, and having to move in with one of our parents as a married couple.

I didn’t want to leave the job that I loved for the unknown. I was worried about feeling stupid while finding our way around foreign countries as English speakers.

“Don’t forgo an opportunity like this because you’re worried about ‘getting behind’ in life, whatever that even means.”

I think we overcame the reservations by having a plan in place to address the fears. We secured an apartment in New Jersey before we even gave our notice at our jobs in Boston, while we still had proof of income. That way we knew we could be in our own space upon the return from the trip.

And luckily, I had a friend with his own company who offered to employ me whenever I returned, so that at least one of us would have an income while I built my business and Sean looked for a job.

We overcame the fear of feeling stupid just by embracing the awkwardness of not knowing a country’s language and checking our egos.

What was your approach to planning the trip?

We planned the first few weeks (accommodations and flights) and then kind of winged it from there. The first few weeks were in Asia and Russia, and we had to book airfare in advance because of the long flights from Japan to Thailand and Thailand to Russia.

Also, because in order to get a Russian visa you’re required to be sponsored by the hotel you plan to stay at, we had to get those details in advance.

We also needed to lock in a departure plan from Russia as part of the visa process. Ours was a train ride to Helsinki, Finland, from Saint Petersburg, Russia. We spent a few hours in Helsinki and then took an overnight ferry from Helsinki to Stockholm, Sweden. After that point, we basically picked the next city and booked flights and accommodations (usually Airbnbs, sometimes hotels) a few days out. We changed locations about every two to four days.

What were your most memorable travel experiences?

There were so many…

In Tokyo, we waited in line at 2am to be one of the first at the counter in Sushi Dai when it opened at 5:30am.

In Kyoto, we rode bicycles through the city to a beautiful pond full of turtles every morning.

We took a brutal overnight train ride from Chiang Mai to Bangkok where we were soon rewarded with 24 hours of pure luxury at the Mandarin Hotel (I had a gift card from a former client, our per night budget for accommodations was about $60 ish per night on this trip).

We flew from Bangkok to Moscow on a flight where we were the only Americans and could say only one word in Russian (chicken!).

We missed a train from Moscow to Saint Petersburg and ended up on the next train across from a guy who angrily screamed at us in Russian the entire trip (after I offered to share my snacks because I read in a guide book that was customary train etiquette).

We saw a double rainbow in the middle of the night (it was July) in the Baltic Sea from the deck of our overnight ferry.

We stayed in an Airbnb in Stockholm that impacted us so much, we adopted a much more minimalist lifestyle upon returning home.

We drove two hours out of Stockholm to go on a ‘Moose Safari’ in the woods of Skinnskatteberg, where I was bitten by countless mosquitoes.

We did an epic pizza tasting menu in Copenhagen at a restaurant called Baest. Sean had a rule about not using our phones with cellular data (only wifi) on this trip, but he broke it to make the reservation at this restaurant.

We had the most refreshing dip in the Mediterranean on the hottest July day after hiking all five towns of Cinque Terre.

We arrived after dark at an apartment in Sardinia and upon walking around in the morning, we discovered that we were in an abandoned building (no electricity in the hallways, drained pool). We promptly left and drove two hours to a B&B where we were so well taken care of by the owner and her son.

We learned our travel style as a couple, which is basically to try to live like a local during our time in a destination, choose one or two activities unique to the area or a little more obscure, and it’s ok to walk by the most famous attractions without buying a ticket to go in.

From being immersed (briefly) in other countries and cultures, we learned that we don’t need that much to be happy. It’s impacted our spending, consumption, and environmental awareness.

We also try to practice being a tourist at home. There are so many new things to be discovered in your own neighbourhood and city all the time.

What have been your career trajectories since returning home?

I started my own company as a wedding planner and bridal wellness coach, and Sean found his dream job a few months after we returned from our trip.

“Our memories from this experience will last a lifetime, and we actually reference moments from our trip at least once a week.”

Having a unique travel experience like this gave us evidence that we could design our lives on our own terms and that everything happens FOR us and not TO us.

Have your travel experiences had an impact on your relationship as a couple?

Yes! We joke that this trip added ten years to our marriage in the best way. It wasn’t just spending 24 hours a day for three months together and learning to be quiet but together.

We did a lot of problem solving together; figuring out foreign subway routes and new city maps every few days. We had to communicate constantly, from determining our budget per day, to deciding on the next destination, to choosing our next move when we found ourselves vacationing in an abandoned building.

Our memories from this experience will last a lifetime, and we actually reference moments from our trip at least once a week.

Do you have any plans for the future?

Travel plans? Yes, we’d love to do an epic US road trip, and we’d love to visit Australia, Africa, and Patagonia in South America.

What advice would you give to other people considering taking a travel career break?

Feeling inspired to plan a travel career break of your own? Our ultimate guide will take you through every step of the process. Read our career break interview series for more life-changing stories. 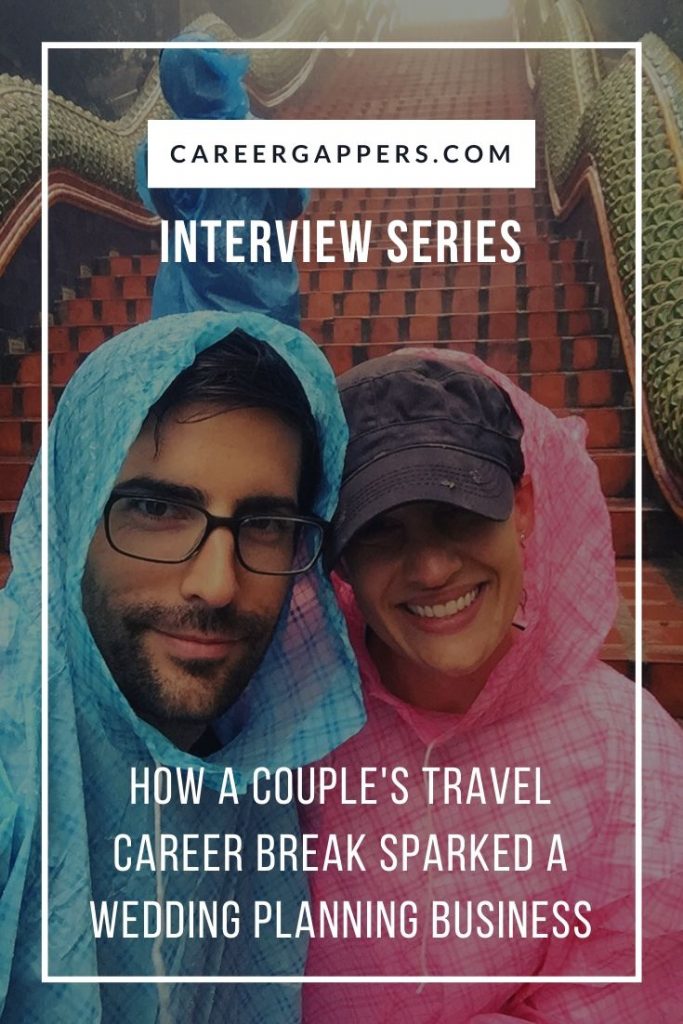