Sydney is one of the world’s hotspots for seeing in the new year. But with over a million people flocking to Australia’s capital for the show every December, and prime viewing points priced at hundreds of Aussie dollars, it can be tough to find somewhere to see the show without spending a fortune. Mrs Macquarie’s Chair is one of the best low-cost vantage points for seeing the Sydney NYE showcase. In this article, I’ll lay out some essential tips for how to make the most of the Mrs Macquarie’s Chair NYE experience.

This site contains links to travel services we recommend, from which we may make commission at no extra cost to you.

From the grassy peninsula bank of Mrs Macquarie’s Chair on Sydney Harbour, the Opera House is aligned with Harbour Bridge for a picture-perfect view of the midnight showpiece. And while Mrs Macquarie’s Chair has gained an excessive party reputation over the years, in recent years the capacity has been reduced from 19,000 in 2017 right down to 7,000 in 2022, making it a much less crowded extravaganza.

We were lucky enough to usher in 2018 at Mrs Macquarie’s Chair. We spent the special occasion with Lisa’s parents, Mick and Sharon, and our friend Dani, who had all flown out to meet us in Sydney over the festive season.

I won’t lie, there was a fair amount of queuing and waiting around involved. But what is a bit of downtime when you’ve got great company and wine?

With some savvy preparation, we had an amazing day that we’ll never forget. Even better perhaps than the awesome Blue Mountain and ScenicWorld tour we did on Christmas Eve, and that took some beating! Just for you, we’ve compiled these top tips for seeing the famous Sydney NYE fireworks at Mrs Macquarie’s Chair.

When we saw the Sydney NYE fireworks at Mrs Macquarie’s chair, it was one of the last free central vantage points in the city. Sadly, in 2021 an entry fee was introduced.

Even so, with tickets beginning at AU$40 for adults and AU$20 for children, it’s one of the cheapest places to watch it with views of the Opera House and Harbour Bridge from relatively close-up.

You can check prices and book tickets at ticketbooth.com.au.

1.  Get there early to beat the queues

In the days when Mrs Macquarie’s Chair was a free vantage point, it was a necessity to get there early or risk missing out. At least with a ticketing system you are guaranteed entry, and won’t need to face hours-long queues!

We arrived before 6:30am, and we joined the queue about 2,000 people deep. Within an hour, the queue ballooned to over 10,000 people trying to get their free spot, well ahead of the gates opening at 10am.

But now, with the ticketed system in place, the gates open at 3pm. If you want to be there for the full stretch, it’s worth arriving a little bit ahead of this, as there’s still likely to be some queueing involved.

2.  Check the weather and come prepared

The average temperature in Sydney in December/January is 26°c, and it’s not unheard of to reach the 40s. On New Year’s Eve at Mrs Macquarie’s Chair you will likely be outdoors for upwards of 18 hours. You’ll need to be prepared for the weather.

Check the weather forecast in advance for guidance, but be aware that Sydney’s climate is unpredictable. At the very least, you should make sure you have the following:

Once the initial queueing is over and you’re settled in a spot, there is still an ocean of time separating you from the midnight fireworks. A good pack-up will help you while away the hours enjoyably.

These handy items will help you get the most out of the long day:

4.  Don’t try and smuggle drinks in

At Mrs Macquarie’s Chair, drinks are not allowed to be taken into the enclosed area on NYE. The staff at the gates were very serious about enforcing this rule.

As we queued, we saw potential liquid containers of all kinds inspected with meticulous diligence. Sunscreen bottles, Pringles tubes, you name it. There were many grumpy faces on display as alcohol was poured onto the ground. Water bottles were only allowed if they were sealed or empty.

Having said that, Mick did somehow manage to blag past a friendly security guard with his two-thirds-full bottle of water. This looked like a one-off though, and we didn’t hear the end of it for the rest of the day.

5.  Securing the perfect spot isn’t everything

When we were finally done with queueing and were safely through the security checks, we joined the scramble for the best viewing spots.

Later in the day, we realised that it didn’t really matter where we stationed ourselves. Come midnight, lots of people had already left after the earlier family fireworks show (more on that later).

Regardless of where people had been perched throughout the day, when the fireworks started, everyone clamoured around the two or three prime vantage points anyway.  Don’t worry if you get in late and can’t get a clear-view slot on the crest of the peninsula. You’ll still be able to squeeze in at midnight.

If your time in Sydney comes midway through a backpacking trip (like ours was), it’s unlikely you’ll have a folding chair to hand.

Midday to midnight is a long time to spend on the floor. If this sounds like too much discomfort, you can hire a chair on site. On our visit the cost was 20 Aussie dollars (AUD), 10 of which you get back after returning the chair at the end of the day.

The main firework show is far from being the only source of entertainment in Sydney Harbour on New Year’s Eve. The city stages all manner of spectacles throughout the day.

The lineup for 2022/23 includes a smoking ceremony, pylon projections, light displays, and more. You can find the full schedule here.

You’ll probably want a few tipples to see in the new year. It’s a special occasion after all, right? Just be ready to part with plenty of cash in return.

Sydney is one of the world’s most expensive cities to begin with, and New Year’s Eve comes at a premium. With a captive audience, the prices at the catering stalls at Mrs Macquarie’s Chair are inflated.

All considered though, it wasn’t quite as bad as we were expecting. We paid 8–9 AUD for a large beer, and 40 AUD for a bottle of wine (red, white or rosé available), although these prices are likely to rise with inflation in following years. Red wine ran out towards the end of the night, so grab one earlier if that’s your tipple of choice.

If your picnic runs out, food is available too, but it’s also quite dear. I paid 15 AUD for a basic tray of chicken and chips.

I don’t want to sound like a condescending parent, and I am really not one to talk anyhow. But do keep an eye on your alcohol intake through the day. It’s a long way through to midnight, and it’s just not worth ruining it.

As we were queueing in the morning, a guy in the group in front of us was already visibly intoxicated and getting rowdy. Midway through the afternoon, we saw him being kicked out for being too drunk.

Later in the evening we saw an alcohol-induced scuffle break out, and two more people were ejected. When the fireworks started a couple of hours later, they were probably watching on a screen or passed out in a corner somewhere. Not the Sydney NYE memory you want to have.

As daylight started to fade, something caught our eye. In the treetops above, and higher in the sky beyond, several huge flying creatures were swooping back and forth.

They were clearly not birds. A closer inspection through my camera zoom lens confirmed our suspicions – they were bats! More specifically, the grey-headed flying fox, which is the largest bat species in Australia and one of the largest in the world.

There’s a good half hour of that sweet spot between light and dark to watch these awesome beasts in flight.

Unbeknownst to us before our visit, the midnight display isn’t the only New Year’s Eve fireworks show on Sydney Harbour. At 9pm, a shorter display (about 6 minutes) is staged for families who don’t want to stay out too late with the kids.

While it wasn’t as impressive as the main spectacle, the family fireworks still make a good show. It’s well worth stopping to watch, even if you’re staying for the long haul anyway.

In 2022, the 9pm display is themed on “calling country”, celebrating local histories and the experiences of indigenous storytellers.

12.  Enjoy the moment at midnight

When the moment finally comes, it doesn’t last that long. All of that queuing and waiting culminates in just 12 minutes of fireworks.

It is 12 minutes of sheer awesomeness, however. I’ve never seen a firework display as exhilarating in my life, and I doubt I will again. It’s a special moment that few people get to witness. Most people (over a billion every year) make do with watching it on a screen.

Savour the moment. Don’t get too caught up in taking photos – plenty of other people are doing that for you. You’ll always be able to watch it back later.

I realise I’m being hypocritical here. How else do I have the photos for this article, right? While I won’t take credit for them – Lisa is our specialist nighttime photographer – I did have my phone out too. Consider it a sacrifice on our part for the greater good.

13.  Be patient getting home from Mrs Macquarie’s Chair

When it’s all done and the curtains are closed on the showpiece, get prepared for yet more queueing and waiting. You’ll be one of millions of people in the city trying to get back to your accommodation for the night.

We set off sharpish after the fireworks and made it back to our apartment in Erskineville by about 1:30am. The queues to get out of the area and into the nearest train station were similar to leaving a big music festival or sporting event.

14.  Get up before 10am on New Year’s Day for the London fireworks!

If the Sydney Harbour showpiece is the world’s most famous New Year’s Eve fireworks display, then its closest rival on London South Bank is not far behind. Thanks to the ten-hour time difference between Australia and the UK, we were be able to watch the London display live on a TV screen the next morning.

It was a little bit surreal watching the revelling crowds in London as we sat with a cup of tea, banging hangovers and dazzling sunlight pouring into our apartment. Even weirder, perhaps, receiving drunken calls from our friends in Blighty a couple of minutes later.

The time difference is all part of the fun. Isn’t it great to watch the celebrations roll in from all over the world?

For an interactive map of Sydney NYE Vantage Points and information about pricing, opening times and catering, see the Sydney New Year’s Eve website. Also check out Sydney Expert for insight tips on the best spot for the midnight firework display.

If you’re seeking things to do during your time in the city, check out this great article on a weekend in Sydney by A Winter Escape for some inspiration. 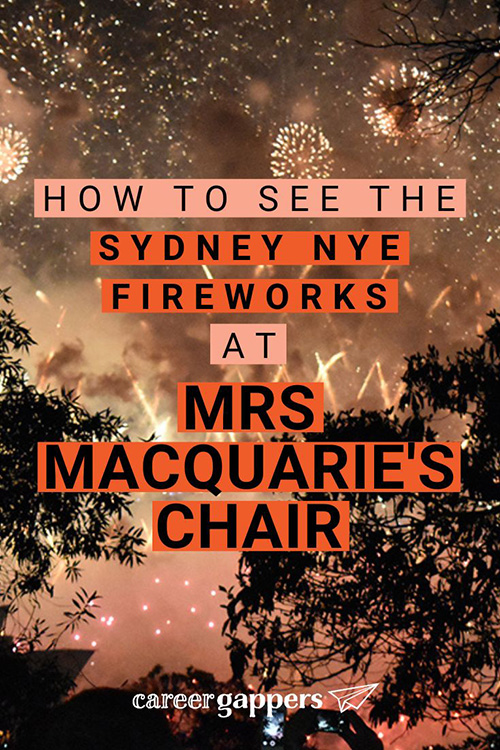