Geena is a Los Angeles bartender who intersperses the job she loves with frequent long jaunts to Asia. After an epiphany during a trip, she and her fiance decided to take a much longer break than usual, and planned a year-long adventure across Asia.

Their journey lasted eight months before Covid intervened, and they found themselves stuck in a strict lockdown situation in India. After eventually making it home, they embarked on another adventure, converting a campervan and driving it across the USA.

In this interview, Geena talks about her passions for bartending and travel, her adventures across Asia and the USA, the experience of being in India during lockdown, and what she has learned along the way.

How did you get into the bartending scene in Los Angeles?

I sort of just fell into bartending. I graduated from college with a Bachelor of Science in biology with grand plans to become a physician. I was working as a medical scribe in Seattle, which is great for getting experience and beefing up your medical school application, but the pay was awful.

I had to get a second job to make ends meet, so I was waiting tables at night at a tequila bar. When I got the opportunity to be the only female bartender at this establishment, I went for it because I knew the pay was better.

And I loved the work. I’m an extrovert and love talking to people. Which is essentially 50% of the job. I got a year of experience and then on kind of a whim, I picked up and moved to Los Angeles for the sunshine. It was difficult to find the right place at first, but I was persistent. Finding a bar job in LA is all about going in-person and making a good impression. They are hiring for personalities, not necessarily just experience.

What inspired you to start building travel into your lifestyle?

I took a ‘congratulations’ trip to Thailand when I graduated from college. After that, I was hooked on travel and knew that it was going to be a big part of my life.

I didn’t start building long trips into my life until I had been working in Los Angeles for a while and meeting more people who pursued their passions more openly. I realised that you can have any kind of life you want to have, and it didn’t need to fit into this classic schedule of college-career-marriage-house-kids-retire-travel.

My co-workers in Los Angeles were all doing incredibly interesting things with their lives and I wanted to have an interesting adventurous life of my own.

What motivated your decision to take a longer career break to travel?

Once I realised I didn’t want to wait until I could retire to see the world, everything became about travel. I had been taking one or two month-long trips a year with my fiance at this point and we always talked about how a month wasn’t ever long enough.

While we were in the Colombian Amazon I just looked at him and said “what’s stopping us from just taking a year off?” and we couldn’t think of a reason. So, right then and there we decided to just do it and set the date for six months later.

How did you plan and save for the trip while bartending?

I worked my ass off. We both did. I got a second bartending job and was working around 60 hours a week for six months, sometimes more. I cancelled my gym membership (because I was on my feet so much anyway), got a storage unit for all our stuff, and we spent very little money. When you’re working all the time it’s actually surprisingly easy to save because there’s no free time to do anything else.

“The streets in India were completely empty. Not a single human on the ten-lane highways except for armed officers and a stray cow.”

Where did you travel on your career break, and do you have any standout memories?

Before Covid ended up bringing us back home, we made it eight months and to nine different countries. Singapore, Indonesia, Malaysia, Thailand, Myanmar, Cambodia, Laos, Sri Lanka, and India.

It was honestly, eight of the best months of my life. We summited the active volcano of Mount Ijen in the middle of the night in Java, Indonesia to see it spitting out blue flames from the sulphur. We saw wild orangutans in the jungles of Sumatra. We got to experience the famous lantern festival in Thailand where hundreds of thousands of paper lanterns are lit and float up into the sky (and it’s actually where we got engaged).

We watched the most incredible sunrise from the top of a stupa in Bagan, Myanmar, and spent the week exploring secluded ancient temples on the back of our motorbike, like Indiana Jones. We went on a multi-day motorbike journey in Laos exploring hidden lagoons and massive caves in the rural countryside.

In Sri Lanka, we learned to surf, saw wild leopards, did a 12,000-step staircase religious pilgrimage, swam with sea turtles, and got to see wild blue whales. That entire month in Sri Lanka was absolutely epic. We also got to participate in Holi in India. It was just checking off one bucket list item after another. Most of which I didn’t even realise was on my bucket list.

Can you recall the situation when Covid brought you back home – how did it all unfold for you?

Well, like almost everyone else around the world we thought Covid was going to come and go in a matter of weeks. So, we didn’t make plans to come home. We were in India, about mid-March, I was ill with a horrible bout of food poisoning, when India announced it was closing its borders. They gave us about 12 hours’ notice that the country was going into full lockdown. We weren’t anywhere near an airport (or in a healthy enough state to travel) so we had no choice but to stay in Udaipur and stick it out in India.

Their lockdown was intense. We weren’t allowed to leave our guest house for three weeks. The streets in India were completely empty. Not a single human on the ten-lane highways except for armed officers and a stray cow. We finally got in touch with the US Embassy in Delhi and they arranged an emergency repatriation flight back into the United States.

I wish I could say that part went smoothly, but it was a bit of a mess as well. We were a ten-hour drive from the airport and had to get special government paperwork allowing us to charter a taxi. We left in the middle of the night and got stopped by police barricades 26 times. The embassy also couldn’t guarantee us a flight. So we didn’t even know until we got there if we would have a seat or not. It was complete chaos. Luckily we did get there and we did get on the plane, so it all worked out in the end.

Have there been any particular challenges for you since returning home?

Honestly, I’ve felt like we’ve been in limbo since we returned. We had to end the trip early, which was unfortunate, but it’s not like we came home back to real life either. We got back with no place to live and no bars open for work. We had no plans and life has kinda just felt like it’s put on hold.

I know Covid has most people feeling this way and created a heightened level of anxiety for everyone, but it’s almost like we still haven’t gotten to mentally unpack the trip. Or physically. We got back almost eight months ago now, and we’re still living out of a backpack.

This year you have embarked on a new adventure in a camper van – how did this idea come about, and where has it taken you?

Well, we had to recalibrate. We were home but kinda without a physical home. We had given up our apartment and it didn’t seem like a good time to look for new lodging in a big city like Los Angeles. Instead, we stayed with family and friends and reconnected after eight months away, but after a month or two we got tired of sleeping in spare bedrooms and couches with no real plans.

Covid took away a lot of our freedom and decision-making ability, but building the camper van kinda took all of it back. We were able to take charge of our lives again.

Building a van had always been something we talked about. We love camping and hiking and everything to do with the outdoors. But you never have the time or the space or the tools to take on a project like this while life is happening. Suddenly we had nothing but time, and my family happened to have the space and the tools.

We finished the van in September, and since then we have driven from Washington state across the northern USA to Maine, then down the east coast all the way to Florida. which is where we currently are.

“Lots went wrong but we still managed to make the most of every opportunity. That’s a strength I get to take with me.”

What have you learned from your travel experiences that you would never have learned at home?

I learned I’m a lot more resilient and flexible than I ever realised. Lots went wrong but we still managed to make the most of every opportunity. That’s a strength I get to take with me.

And of course that people are inherently good and for the most part kind-hearted. Complete strangers helped us out along the way numerous times. I think sometimes you can forget that living in the United States today. All the division and political polarisation gets in the way.

Do you have any particular hopes and dreams for your career in the future?

Well for starters, I hope that most small restaurants and bars can make it through this. Personally though, I hope to get back behind the bar to start saving up for the next big adventure.

Because this definitely won’t be my last career break. I love bartending in big cities. It’s a great career, not just for the socialisation aspect, but because it allows you to pursue your passions. And I definitely confirmed that travel is mine.

What advice would you give to other people considering taking time out of work to travel?

To 100% do it. Not to throw a whole lot of cliche at you all at once, but – life is short. You gotta pursue your passions and make your own dreams come true.

The timing is never gonna be exactly right. You have to make it right. The most difficult part is committing, booking the flight, and putting in your two weeks’ notice. After that, everything else is easy.

Did you enjoy Geena’s story as much as we did? Check out more inspiring career break tales in our interview series. Start planning your own adventure with our ebook, How to Take a Year Off Work.

Love this story? Pin it! 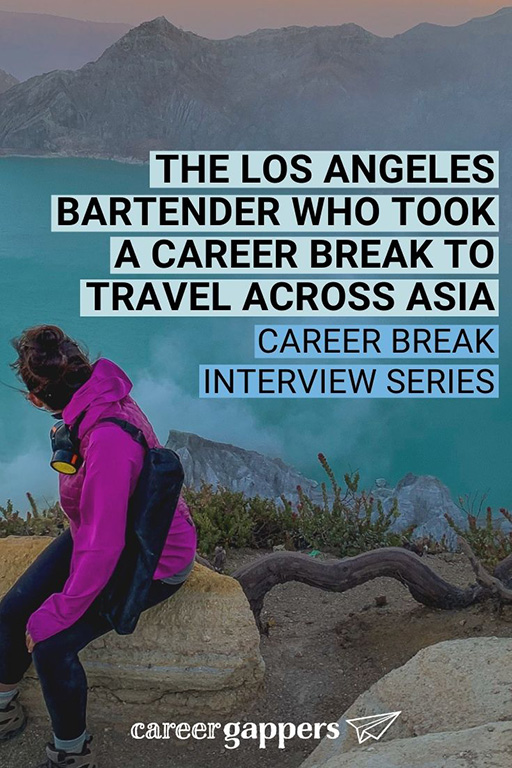