After years of working in a hospital as a doctor, Ilona was feeling burnt out. She knew she didn’t want to continue in her current job, and after talking to other long-term travellers, she decided to take a break and travel for a year while figuring out what to do in the future.

While on the road, she met her boyfriend, Daniel. They now live in Germany, where Ilona has successfully changed to a career in medical research. Despite both having full-time jobs, they still combine their work with travel, and write about their adventures on their blog Top Travel Sights.

In this interview, Ilona talks about her decision to take time out, how her travel experiences led her to a rewarding career change, and the lifestyle changes she has made since returning to Germany.

What was your career situation before you took a break to travel?

I worked in a university hospital in Germany as a doctor. My speciality was anaesthesia and intensive care, so I was busy either in operating rooms or on one of the intensive care units.

By the time I decided to take a break to travel, I had just finished my residency and had been working for six years since finishing university.

What inspired your decision to take a long break from your work to travel?

Working in a hospital is both physically and mentally exhausting. This is especially true when working in an intensive care unit in a university hospital.

Most of my patients were severely ill, and many of them did not recover. Yes, I also experienced rewarding moments when we discharged patients who had been with us for weeks. But long-term, I think working in intensive care damages your mental health.

I watched many of my co-workers turn sarcastic and bitter over the years. I knew this was a coping mechanism, but I also knew I didn’t want to end up like them.

One summer, I then went on holidays to Mongolia. There, I met lots of long-term travellers. Their stories, in combination with the growing exhaustion I felt at work, made me realise that I needed a break. Plus, I thought that a year off would give me a chance to think about my career and possible options. So I prepared everything and left.

How did your family and friends react to your decision to leave your job?

I think most of them thought I was doing the right thing, especially my mum. If she could, she would have come with me.

One friend felt so inspired by my trip that she decided to leave her job as well. She joined me halfway through my journey, and we travelled together for many months through South and Central America.

What about your workplace – how did you approach it with them, and what preparations did you make for your departure?

In German university hospitals, young doctors only get time-limited contracts. I knew when mine was going to run out, so I didn’t need to make many preparations.

At the same time, I wanted to make sure that my boss was aware that I didn’t want to renew my contract. I made an appointment with her about six months before I left. That way, I wasn’t assigned to any rotations yet, and planning was much easier for my colleagues.

Where did you go, and were there any big standout moments of the trip?

I started my trip in Turkmenistan and followed the Silk Road to Beijing. Then, I continued to Southeast Asia and Australia, before crossing the Pacific via French Polynesia and Easter Island. For the rest of the time, I travelled through South and Central America, zigzagging across the continent until I eventually ended up in Cancun.

I think the best moments were either those in very remote places or those when I met incredible people. During my travels, I came across many helpful people, and the trip wouldn’t have been the same without them.

I loved meeting locals in Turkmenistan because it gave me a chance to experience a different side of a really weird country. Same when hiking to the Lost City in Colombia, where I got the opportunity to talk to our indigenous guide and learn more about his culture.

I also enjoyed Easter Island because it is so remote and unique.

And last, I had a lot of fun crossing from the Atacama Desert in Chile to the Salar de Uyuni in Bolivia. Our local driver was amazing, and we saw stunning landscapes on that trip. And flamingos. Lots and lots of flamingos.

I also realised that I love wildlife, so I truly enjoyed the Pantanal, the Amazon and most of Central America.

Did you encounter any particular challenges travelling on your own?

I travelled much less on my own than I had initially thought.

Along the Silk Road, I joined an overlanding company. I had planned to then fly to South Korea and to keep travelling on my own. But at the beginning of my trip, I met Daniel. He was travelling onwards to Southeast Asia from China. After spending two months together, we had to split up while he went south and I went on to Beijing.

Two days before my flight from Beijing to South Korea, I spontaneously decided to cancel all of my solo travel plans. I took a bullet train down to Kunming and went on to Southeast Asia with Daniel instead.

After that, I visited a friend in Australia. The only place where I indeed travelled by myself was French Polynesia. I spent a week here, before meeting up with my friend on Easter Island. After all that time of being surrounded by other travellers, I liked the change. I had travelled a lot by myself before, so I knew what to expect and enjoyed it.

“No matter what happens, there’s always a solution.”

What did you learn from your travels that you wouldn’t have learned back at home?

No matter what happens, there’s always a solution.

I got into plenty of situations where I didn’t know what to do at first. Air Berlin went bankrupt while we were on the trip. Guess who my friend had booked her flight home with? Fortunately, we did not just manage to get her money back through her credit card company, but we also found an affordable flight she could take instead.

I also learned that I need way less luggage than I had thought.

For Christmas, I took a flight from Peru to Germany to see my parents. On the way back to Lima, my backpack got lost. Not just delayed by a day or two, but lost for a few weeks. That means that I had to travel with only my tiny daypack. We were going to Patagonia for two weeks, and I could barely fit a jacket into that backpack.

But somehow, I managed. And when I eventually came back to Lima, I even managed to recover my big backpack! It had been sitting in storage at the airport for weeks, and Air France had just “forgotten” to send it to me.

How did you approach the challenge of resuming your career after the trip?

When I came back, my highest priority was to earn money. That’s why I applied for a job in a hospital, even though I knew I didn’t want to work there long-term.

Fortunately, we don’t have enough doctors in Germany, so I had no trouble at all finding work. On the contrary, I got lots of job offers that I had to turn down.

“If I hadn’t decided to travel, I am not sure if I would have made such a career change. But I’m thrilled that I did.”

How have your travel experiences influenced your career direction since returning home?

Before leaving, I already knew that I didn’t want to work in a hospital anymore. During my year off, I spent a lot of time thinking about possible careers. I eventually decided to go into medical research.

After coming home, while working in a hospital, I started looking for entry jobs in the pharmaceutical and biotech industry. I also took an online class to learn more about the legal framework of that industry.

Less than half a year later, I got a job in a pharmaceutical company. I am now working in clinical research, to help develop new drugs and therapies, and I absolutely love it.

If I hadn’t decided to travel, I am not sure if I would have made such a career change. But I’m thrilled that I did.

Have you made any other lifestyle changes as a result of your travel career break?

I moved to Frankfurt. Before that, I had been living in Rostock, a small city up at the Baltic Sea. It’s a beautiful region, and I still miss it sometimes, but I am very happy where I am.

First, because Daniel is here as well. And second, I am now much closer to my parents. As much as I loved living by the sea, I hated that it was such a hassle to visit my family. Plus, Frankfurt has a giant airport. Right now, we only travel locally, but we hope to take advantage of the many flight connections again in the future.

Besides that, I’ve sold my car. I barely used it before, and I don’t need it at all here in Frankfurt. I’ve also gotten rid of a lot of useless possessions that had accumulated over the years.

“Fortunately, living in Germany, we have plenty of holidays, so we’re able to keep travelling even while working.”

Do you still hope to travel in future? If so, how will you balance this with your medical career?

Right now, we are exploring closer to home. Even though we’ve lived in Frankfurt for a while, we still have a long list of places close by that we want to see. Hanau, for example, which is the birthplace of the Grimm Brothers. Or the Middle Rhine Valley, a beautiful Unesco World Heritage Site that’s very close.

Besides that, we’ve been talking about visiting more of Europe. We were lucky and got to travel through the Baltics in February, just before the pandemic hit. I’d love to see the Balkans next.

We’ve also talked about going to Western Africa, which is a region where I’ve only been once, and Daniel hasn’t visited at all. But right now, this is far off in the future.

Fortunately, living in Germany, we have plenty of holidays, so we’re able to keep travelling even while working.

What advice would you give to other people considering taking a travel career break?

Just do it! Don’t worry too much and go for it. You’ll always get another job when you go back home. But you never know if you’ll ever get the opportunity to travel again.

Did you enjoy Ilona’s story? You can read more tales of career breaks in our interview series, and start planning your travel adventure with our ultimate guide.

Love this story? Pin it for later! 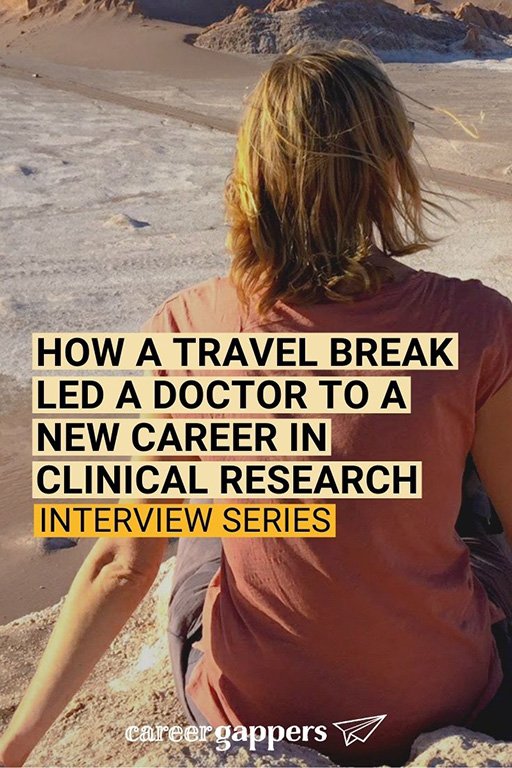