Will career gapping be the next big travel trend?

People have been taking time off work to travel since before the word ‘career’ was even a thing. In the 1780s, a forty-something Thomas Jefferson journeyed through Europe, visiting cathedrals, enjoying the views and writing about wine along the way.

But it has never been the norm to take a significant mid-career travel break. Such adventures are traditionally viewed as the remit of the young, rich and privileged. Employers have been conditioned to treat anyone older than 25 with suspicion if they have a ‘career gap’ on their resume.

As the millennial generation reaches maturity, perhaps all of this is about to change.

The rise of the gap year

In the decades since, gap years have become evermore popular. As the world has become more peaceful and connected, and as international travel has grown cheaper, backpacking trips have become accessible to many more people.

At the same time, a consensus has grown around the advantages of gap years. The benefits that young people reap by challenging themselves in new ways and experiencing other cultures before university, or before stepping onto the career ladder, are widely recognised.

Until very recently, backpacking around the world was associated primarily with young people coming of age. The idea of older people doing it was considered reckless and irresponsible.

In 2015, when my 95-year-old grandmother (may she rest in peace) learned that I was planning to put my career on pause for a year and travel in my mid-thirties, she described it as a “crackpot idea”. I heard that phrase plenty more times before jetting off a couple of years later.

She grew up in very different times. While this kind of attitude still lingers today, it has become an outdated one.

From the gap year to the career gap

In the 21st century, the concept of the ‘adult gap year’ has come to the fore. The publication of Tim Ferriss’ best-selling book The 4-Hour Workweek in 2007 was a watershed moment in this shifting landscape.

Ferriss argued against the conventional wisdom of working continuously through the prime years of your life, planning all the while to retire in comfort in your twilight years.

He wrote: “The question no one really seemed to be answering was: ‘Why do it all in the first place? What’s the pot of gold that justifies spending the best years of your life hoping for happiness in the last?’”

To counter the societal norm, Ferriss advocated building several shorter breaks throughout your working life to pursue things you enjoy while at your physical peak. He dubbed these breaks “mini-retirements”.

“Just as with gap years in the 1960s, the tide is turning as another new generation matures.”

Two years later, the entrepreneur Stefan Sagmeister gave a TED talk promoting a similar concept. He put forward a framework of taking a one-year career break once every seven years. He had implemented this approach into his design studio business and seen tremendous rewards.

In the talk, he said: “We spend about 25 years of our lives learning. There’s another 40 years that’s reserved for working. Then tucked on at the end of it are about 15 years for retirement. I thought it might be helpful to basically cut off five of those retirement years, and intersperse them between the working years.”

The ideas of Ferriss, Sagmeister and other pioneers have reached millions of people worldwide and grown into something resembling a movement. As travel has become ever-easier and attitudes towards working lives have changed, mid-career travel breaks have grown in popularity. The career gap has emerged.

I have witnessed this through my own experiences. When my best friend and I backpacked across Europe as 18-year-olds in 2001, the vast majority of the people we encountered doing the same thing were our age, or not much older. Fast-forward to 2017/18, and when my wife and I took a one-year travel career break, we met a much greater diversity of people of many ages and backgrounds.

However. While the career gap has grown in prominence, it is still a long way from being the norm. Yet, just as with gap years in the 1960s, the tide is turning as another new generation matures.

What is a career gap anyway?

A career gap is quite simply a period of time spent away from work to pursue other interests. It doesn’t have to be for travel; it could be to volunteer, learn a new language or build career skills, raise children, or even to try a different job.

Taking a career gap does not mean stopping your career progression. Rather, it means you are taking a step back from your regular working environment to develop in other ways.

There are many other phrases often used interchangeably with ‘career gap’. Some I’ve already mentioned above, like career break, gap year and mini-retirement. Then there are others, such as sabbatical. Each has its different mechanics, but they essentially relate to the same concept.

Read more about the definition, along with tips for when it comes to resuming your career, in our guide to explaining career gaps on your resume.

Is career gapping is about to explode?

There is good reason to believe so, and it can be summarised in one word: millennials.

This means that in 2019, the average age of millennials will pass 30.

As millennials grow further into adulthood, their behaviours and life choices will eventually become the mainstream. The new normal. The new conventional wisdom. And millennials live differently to previous generations. But how?

“There is a growing body of support in place for the millennial generation to take time out of work to travel.”

Secondly, millennials are prioritising their spending on experiences over long-term assets. Perhaps driven by the increasing difficulty of achieving home ownership, this generation are investing in travel instead.

Thirdly, millennials are having less children. The US National Center for Health Statistics reported the lowest ever fertility rate in 2016. There may be many reasons for this, including the cost of raising children, different societal expectations, and career considerations.

There’s also the environmental considerations. Millennials are the most climate-conscious generation, and recent evidence shows that the best way individuals can have a positive impact is by having fewer children.

This means that millennials have more freedom to travel. I am not saying that having children should stop people from travelling – I don’t believe it should. We’ve met many people who travel with their children, some permanently, and it’s a wonderful education. However, people without children do have greater perceived mobility, and so they travel more.

A final factor is that there is a growing body of support in place for the millennial generation to take time out of work to travel. The Harvard Business Review has highlighted research showing that organisations benefit when employees take sabbaticals. An increasing number of businesses, large and small, are opening up to the idea and implementing policies to encourage it.

In 2016, a survey of over 8,000 millennial employees by ManpowerGroup found that over 40% of millennials were planning to take significant breaks from work in order to travel.

Planning a trip like this takes several years in itself. We know this because we’ve done it ourselves; it took us five years to save the amount we needed and prepare for our trip. So people who began this process two, three, four or five years ago may now be approaching the finish line.

“The more people take the leap, the more that the benefits of doing so will spread and be recognised.”

More recently, the Financial Post in Canada highlighted research showing that two thirds of Canadians have thought about taking a career break, a quarter are already saving for it, and half would use the time off to travel.

The career gap has a burgeoning effect. The more people take the leap, the more that the benefits of doing so will spread and be recognised. Organisations will need to adjust further as the public’s approach to careers becomes more fluid.

By 2020, as outlined in the ManPowergroup report above, millennials will account for over a third of the global workforce. This generation is leading the charge towards a future where it will be a bigger risk not to take a career gap than to take one.

How to take a career gap: further reading

Our vision at Career Gappers is to build a world where everyone is empowered to take time out of work to travel at any stage of their career.

We have written extensively about our own career gap experience, and compiled a series of resources to help you do the same. Get started with our complete guide to taking a career break. You may find the following articles useful:

We also have article about how to save for a career break and manage your travel finances:

Have you taken a career break to travel, or are you planning to do so? Get involved in the conversation in the comments below. 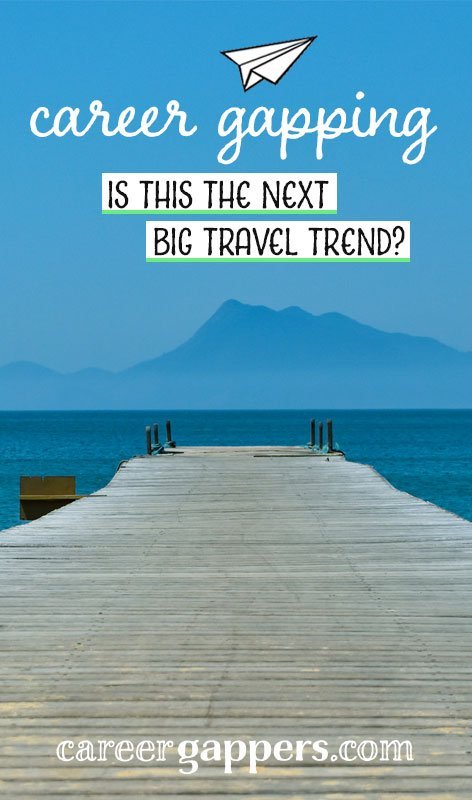 25 thoughts on “Will career gapping be the next big travel trend?”