A cancer survivor who left corporate life to travel the world

When Anthony Bianco was sent on a work assignment to a former war zone in Kosovo, he had never been out of Australasia before. The trip sparked a new passion in him to explore the places that tourists usually avoid. Soon afterwards, he left his job in environmental science consulting to embark on a trip that covered 50 countries across six continents.

Anthony’s career break adventure was back in 2002/03, when leaving a job to travel was much less common than it is today. But another episode in his life had already inspired his determination to live life to the fullest. At the age of 21, he was diagnosed with a rare cancer, which against expectations he survived.

After his round-the-world trip, Anthony reinvented his life and career. He now works in content marketing, and runs what he describes as a ‘silly travel blog’ called The Travel Tart. His work has been featured on the likes of USA Today, news.com.au and ABC Radio.

In this interview, Anthony tells us about the experiences that inspired his career break, how the world has changed since he set off on the trip in 2002, the lessons he has learned from his travels, and his hopes and dreams for the future.

What was your career situation before you took a travel career break?

I had been in the workforce for about seven years after finishing university, and had worked for a couple of companies. At the time before my career break, I was working for a consulting firm doing work in the environmental science field.

What inspired you to take a long break from work to travel?

It was working overseas that gave me the inspiration to take a long break to travel. The travel bug bit me in a place I wouldn’t have dreamt of travelling to at all – Kosovo, in the former Yugoslavia, during 2001. I went there for work for about a month. I was working for an international firm and was doing some work on some legacy environmental issues there.

However, that was nothing compared to the social issues at the time. I was working with both Serb and Albanian communities and they all invited me into their homes and showed me their world – and I loved every second of it. It was here that I realised that we are all the same and we all have the same needs and wants. I think my time in Kosovo developed a perverse taste for places most package tourists would avoid.

That sowed the seed for me to go on a round-the-world trip the following year. Other drivers were that I’d really had enough of the daily grind and just wanted to just head off and travel. I was bored and wanted to do something exciting.

“Most people at that age think they’re bulletproof, but that’s so far from the truth. Having a life-threatening illness definitely makes you consider your own mortality.”

How did your experience as a young cancer survivor influenced your desire to explore the world and live life differently?

Who considers their own mortality in their early twenties? Not many! Most people at that age think they’re bulletproof, but that’s so far from the truth. Having a life-threatening illness definitely makes you consider your own mortality.

I would say that this illness changed everything. It didn’t change my personality, but it definitely changed my perspective on life and my attitudes to a lot of things. You’re going to be a long time dead, so you’d better make your living time memorable!

The cancer experience seemed a lifetime away when I had started the trip, but it was subconsciously driving me to do something a bit crazy like leaving corporate land for an extended period of time to do something that I really wanted to do. Hell, I should be six foot under in a cemetery, so what did I have to lose?

How did you plan, save and prepare for the trip – what were the biggest challenges?

I’m going to say the boring B word – budget! The worst thing about funding your travels is not having enough money to do the things you really want to do. There’s no point going halfway around the world and then realising that you can’t afford something that’s been on your bucket list for most of your life.

What I did is set a budget based on how long I was away for and where. Once this amount was determined, I regularly contributed the amount of money I needed per week into a separate account over X number of weeks. I calculated my savings time/schedule and stuck to it.

How did people in your life react to your decision to take a travel career break, especially given it was a less common thing to do at the time?

I think they were envious, but happy for me that I was going to do something I had always wanted to do. Of course, my parents worried as all parents do, but they knew that this was going to make me happy, so that made them happy.

“I enjoyed every single second of it. The worst day travelling is way better than the best day at work.”

Where did your adventure take you, and what were your standout memories and experiences?

My trip involved travelling to Africa, Europe and South America. Those were the three continents that I had always wanted to visit. Some of the most memorable experiences included waiting four hours for an unroadworthy minibus taxi in southern Africa until it filled up, so that the driver compensated for the lost time by speeding at 150 km/hour on dodgy highways.

Tasting freshly brewed beer out of a plastic rubbish bin. Making new friends from every corner of the earth. Eating great food that causes you to check yourself in as excess baggage on the next flight! I enjoyed every single second of it. The worst day travelling is way better than the best day at work – a lot of the time!

How did you readjust to life back at home after you returned from the trip?

I always suffer the ‘post travel blues’ or reverse culture shock whenever I come back from a trip. I think the only way to minimise this is to book your next trip away as soon as you come back from one! It felt weird to see cars stop at pedestrian crossings and placing myself back in familiar surroundings.

“My first ever surfing lesson was with former world champion Mark Occhilupo.”

How did your travel experiences influence and shape your career direction in the years afterwards?

I’ve always incorporated travel as much as I can. I’ve looked out for travel experiences, for example, planning personal travel after an overseas business trip. You gain all sorts of experiences from different types of travel. I also run a silly travel blog called ‘The Travel Tart – Offbeat Tales From A Travel Addict’, which concentrates on the lighter side of travel. This was a result of just experimenting with it to see where it would go and because I really enjoy it.

When I first started the website, I would not have ever believed it would lead to so many fantastic experiences. For example, my first ever surfing lesson was with former world champion Mark Occhilupo. It was like trying to teach a sack of potatoes how to surf, but I loved it! I’ve done other great things like meet and interview some travel celebrities, and done crazy things like throw myself off a perfectly stable platform when bungee swinging.

What are the biggest life and career lessons you have learned from travel?

Working overseas is amazing because you learn different ways of doing things, and you can apply these in your home country.

How do you think the world is different today for long-term travellers compared to when you took your trip in 2002/03?

Obviously, technology has advanced considerably. I had one of those old Nokia ‘dumb phones’ which had a battery life that lasted days and were indestructible! There were internet cafes around where you could check your email, but WiFi wasn’t around then.

These days, everyone has a smartphone to help with planning and conducting their travel. I mean, the term ‘selfie’ wasn’t around then! One thing is that people should pack the tech away sometimes and go and discover things on your own, rather than relying on Google all the time.

What are your hopes and dreams for the future?

Travel will always be part of my life, and I’ll find any way to make that happen. My passport and frequent flyer points have never felt so useless, so whether it’s for business or personal reasons, I’ll be keeping my eyes open for any travel opportunity that comes my way!

What advice would you give someone who is considering taking a long break from work to travel?

Just go ahead and do it! That is, when it becomes safe to do so again! The decision to take a long career break to travel was the best decision I have ever made, and it left me with experiences I will never forget. Plan to have no plans, and just work out your entry/exit points. The best travel experiences I’ve ever had have been off the cuff. Whatever happens, you won’t regret it! It was one of the happiest times of my life.

Inspired by Anthony’s story? Read about more incredible career break experiences in our interview series, or start planning your own adventure with our ebook How to Take a Year Off Work.

Love this? Pin it for later! 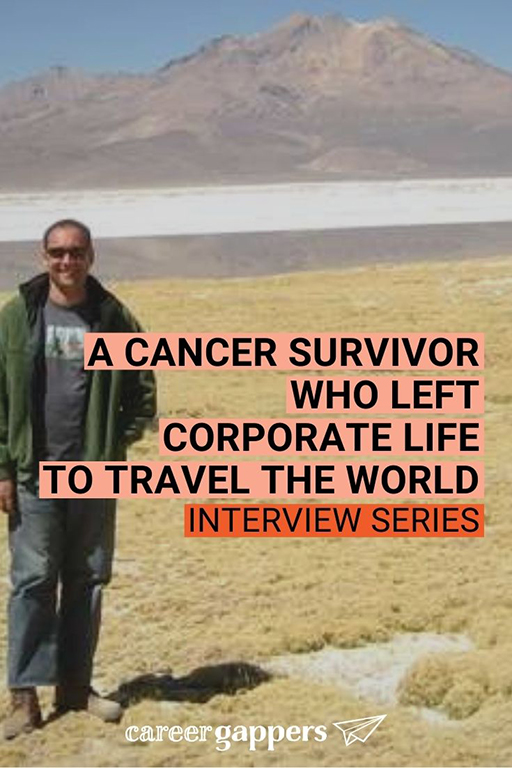